Doug Polk and Daniel Negreanu both claim the other is getting ridiculously lucky during their heads-up challenge, but neither can prove it. That’s because viewers only see hands that make it to showdown. So, perhaps they should start letting the fans view the cards (on delay, of course). 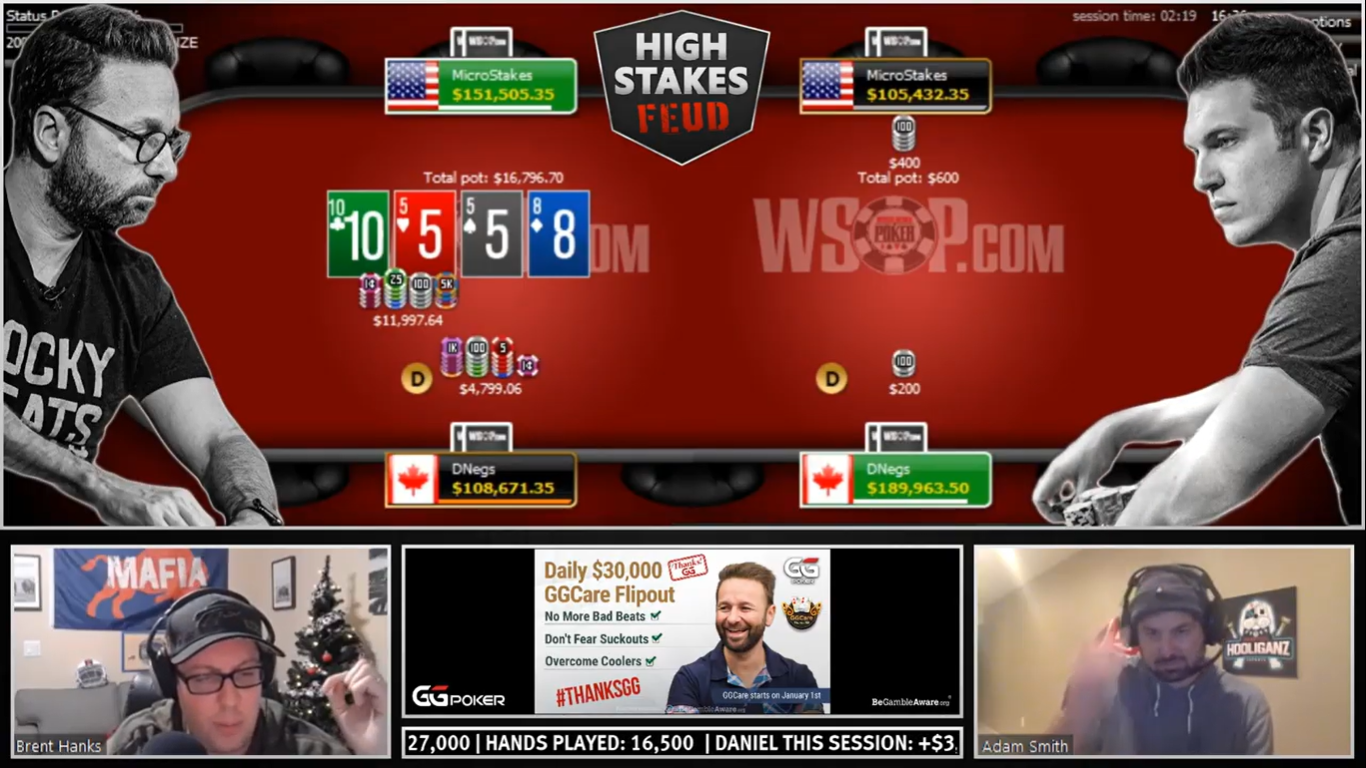 The poker stars have now completed more than 17,000 hands of a 25,000-hand heads-up No-Limit Hold’em poker challenge. Polk, as expected, holds a sizable lead of $703,000, but Negreanu has been more competitive recently than most anticipated.

I’ve watched somewhere around 75% of the hands played. From my perspective, Polk’s clearly been the superior player in terms of skill. But, I must say, his edge hasn’t been as great as I predicted before the match began in October. I still give Negreanu very little, if any, chance to win, even if he runs hot. But, I’m highly impressed with his play against arguably the top heads-up NLH player ever.

The question now isn’t so much who is going to win; most expect Polk to coast to victory at this point. The players have now made it about something neither can prove — the luck factor. Who has been luckier in this challenge? If you ask Polk, he’ll say Negreanu has been. Negreanu, on the other hand, has constantly complained in his post-game interview on the GGPoker YouTube channel that he’s running horrible.

Since I can’t see the cards that don’t reach showdown, I can’t prove who has been luckier. But from the showdown hands I’ve been able to see, it does appear Polk is running hotter than Negreanu.

Following Monday’s session, both players ranted about luck, and it was quite epic. David Lappin, host of the Chip Race podcast, mixed the rants together for your viewing enjoyment.

In his epic rant, Negreanu complained about missing so many flushes and Polk catching so many big hands. Polk, however, claims Negreanu has run hotter during this challenge than any heads-up competition he’s faced.

Prove it or Move It

The fact of the matter is, neither play can prove who has been the luckiest, so their words are meaningless. Actually, they could prove their points by starting to show us their hole cards on every hand. Then we could see for ourselves if luck is truly a contributing factor in this challenge.

I understand that neither player wants to allow the other player to see exactly what they’re doing. If the cards are exposed, they might have a hard time confusing their opponent. But if they’re going to go on public rants about how unlucky they’ve been, prove it to us or we don’t have any idea who is accurate and who is just biased.

Plus, this match would be far more intriguing from a fan’s perspective if we could see the cards. Poker is more entertaining on live-stream or television when hole cards are visible.

I can see the players’ perspective in that they don’t want to expose too much of their strategy. They’re playing for hundreds of thousands of dollars, so they’re mostly concerned with the money above the fans’ enjoyment. But we all know Polk has an edge. He even admits that. Give up just a little bit of that edge and show us the cards. It’s good for the game.