Is it the correct shove? 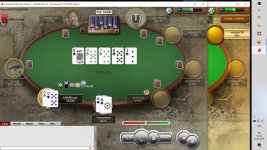 Nothing wrong here. It is a common loss. A A against 10 10 and a Set on board and A A gone. It is a normal scenario and happens quite often. No need to regret.
Actually Nowadays I don't regret at all on online poker world as I am accustomed to it.

Brandlad said:
Nothing wrong here. It is a common loss. A A against 10 10 and a Set on board and A A gone. It is a normal scenario and happens quite often. No need to regret.
Actually Nowadays I don't regret at all on online poker world as I am accustomed to it.
Click to expand...

So what range of shove villain can use correctly after my 4bet reraise?

I would play same as you. in poker world sometimes AA is not always the winning hand
L

Anyone saying they would fold Aces here preflop is either lying or they are seeing things my way. Yes you played it excellent up until the push by the villain. The Villain made a mistake by pushing. It's typical in freerolls. People use them to test strategy. Also most are not serious players Few actually give a damn. many push every hand with any 2 cards in any +EV hand/situation.

Try to keep the below in mind when making a tough decision.

1.Live to fight another day. So pick small battles. You aren't going to win it all that hand , but you DAMN sure can lose it all with a situation like the above.
2.Next hand you get 2 new cards.
3.Set achievable goals ! I. e. making it to first break , bubble , final ECT.
4If the decision is for your whole stack you better damn well have the nuts.
5. It's time to be OK with sometimes folding Aces preflop in TOURNAMENTS .
6. It's time to retrain your brain when you wake up with Premium hands early on in the tourney. Specifically AK, AA, KK and QQ , AQ ECT They can lose too and often
*It's ok to disagree with me. I'm good with it. *


Aces are not unbeatable. Repeat it until you see those cards for what they are.


A Pair. Top Pair but a damn Pair. with the math tilted more in favor of not improving rather than improving. Especially in a heads up pot for your whole damn stack

Its kinda like Doyle says, "aces are great for winning a small hand or losing a big one".

All in with AA is always right. At this time, you're out of luck. Better luck next time. This is poker.

This is the right push! In this situation, you did everything right. Here you just have no luck.

Lost in the twilight zone