I don't understand it. ICMizer says shove any 2 in this spot. 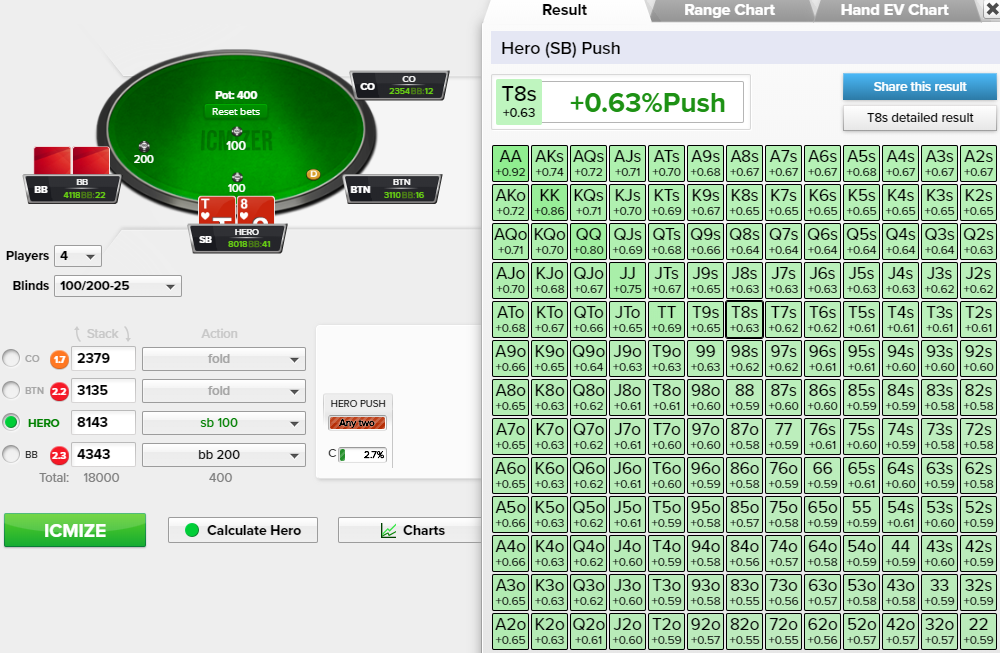 I guess villain intentions might change that. This opponent had been mostly LAG and I expected a call if I shoved here and didn't think I had enough equity to call a shove. But looking in Equilab, 8Ts has about 52% against a random hand. Does that sound correct?

Either way, I think I played this wrong. I should have checked my gut shot. And then call if they bet. Then check fold the turn, I think, unless I picked up something more.

Would you have shoved PF?

Preflop
The reason, you can profitably jam any two cards, is because, its on the bubble, and you have twice as many chips as anyone else. Moreover BB is the second largest stack, so its a total ICM disaster for him to go broke now and be the bubble boy. This is why, even though you are jamming any two at equilibrium, he is only calling 2,7% of hands. The reason is, he needs a massive equity advantage to profitably call, because the chips, he might win, are worth much less than those, he already have.

If he dont understand this and will call you off way to wide, then jamming the worst hands might become unprofitable for you. And there are also other possible lines than open jamming, when he is this deep. You can come in for a limp, or you can make a standard raise. I dont like going to just over a min-raise though, because then you price him in to call with any two cards in position, and you are not applying any real pressure on him. So of all the possible preflop actions, you took the only one, which is decidedly bad, because you used terrible sizing.

Flop
I like stabbing this flop but your bet is way to small. Once again you price him in to float you with literally any two cards in position. And this is not, what you want. You want him to fold, because you only have T high.

Turn
As played I am ok dubble barreling, and sizing is better now.

River
When he call your significant turn bet, I would just give up now, and especially on a card like this, which is not scary to him. If you are trying to sell the idea, you rivered trip 5´s, thats not a very credible story, and even less so when you once again go for this tiny sizing. He is not folding any pair, when you give him 5:1 to see a showdown.
3

Most if not all of the solvers are programmed with the prerequisite that your opponents are playing perfectly. If villain was playing perfectly they would be folding a lot of hands here since this is the bubble, there is a short stack, and that short stack is covered comfortably (at least somewhat) by the villain. In these spots villain should only be continuing with the strongest of hands and should be over folding as we would say. However, this is a $1.50 so few are playing perfectly so to me this is not even close to a jam with any two cards. However, it is a spot where we should be raising pre and leaning on the villain.

I dont like min raising in these spots where it is blind vs blind so I would raise more pre flop. Somewhere higher than I would normally go, maybe 2.7BBs or so. The flop bet should be larger which would then also be enough to tell me villain isnt going anywhere. This would be a hand I would play making a larger bet on the flop knowing I am much less likely to double barrel. Im not saying doubling is bad here but I lean towards trying to take it on the flop and also a bigger pre flop raise. If both of those were called that would be enough for me to know my 10 high is no good and I cant get villain to leave the party.
E

tzuriel said:
I don't understand it. ICMizer says shove any 2 in this spot.

I guess villain intentions might change that. This opponent had been mostly LAG and I expected a call if I shoved here and didn't think I had enough equity to call a shove. But looking in Equilab, 8Ts has about 52% against a random hand. Does that sound correct?

Either way, I think I played this wrong. I should have checked my gut shot. And then call if they bet. Then check fold the turn, I think, unless I picked up something more.

Would you have shoved PF?

Thank you for posting

Fun and 300 strong responses as usual, you want to dig deeper into how they are thinking about this spot to learn and grow as a player.

When we are playing in games in which our villains do not play GTO we use GTO as a base and adjust according to our V's playing style. ICMZER uses GTO strategies.

We are OOP vs the second biggest stack- who is a LAG on the bubble and we have the chip lead. WE always always always make stack protection our #1 goal in a spot like this.

It is the combination of all the factors together that change our play here. Think about being on the bubble 9 handed with AA in the BB and 7 players go all-in =action on you to call all-in. Of course you have the best hand but you do not need to call.

In this spot we have a player who calls to much and we have a T high hand with draws. This is not the hand + this is not the player with which we want to get into a fight with on the bubble.

If you folded preflop it would be a more +ev play than a small raise OOP.
If you completed and folded to their raise also a +EV play compared to the small raise
The above statements are based on your current skill level. We want to recognize our skill level and adjust our lines accordingly.

Again you are doing a great job learning and growing so that skill level will increase but it is ok to know what we can do and cannot do right now.

How you may want to think about your hand in this spot vs this V is this way -if I do not make the nuts how do I see the river cheaply, If I miss the flop does this V fold to one bet? No- so the #1 strategy is stack protection so I check fold as I can keep my chips for the very next hand when I have position on this V.

Jamming it in his face could be a way to go, depending on how you saw him play earlier. Personally I would limp in this situation and not try to bluff and make a pot bigger with nothing to back it up. As was played it was ok, despite the bet on the river. The last bet is desperation since he called to all your raises and there aren't many bluffs there. No possible flush, straight and the 5's came after you kept betting so you can't represent them. Better to just give up on the river and not lose more chips in my opinion.
T