Years ago (2011) I had joined Intertops and have had good success there. There was an awesome selection of games, great customer service and the ability to get paid when requested. So, when I open Intertops now, I don't even recognize it! They have taken away the popular daily tournaments, which had a decent number of entries, and any of the Freerolls (I know they don't make money off of them) but there is literally nothing there to draw people to want to play there. I personally wish they could return some of their games/tournaments and traffic would certainly improve.

Do you think Intertops will ever return to the way they were?

I still have a bit of money there but never play. Never any games to play

Its a terrible site with no traffic ,if it wasnt for CC games I wouldn't even open it

I think they are not even trying to attract more players.
V

Of course, this is not the flagship of online poker, but they have their own zest and they withdraw money regularly!
C

intertops is the only poker site that I have not won any money on. So, I don't like it. I might change my mind if I win.

I only know him from the games on the forum

Hope this is the yellow press Until then, let's play in Sunday Sundowner! 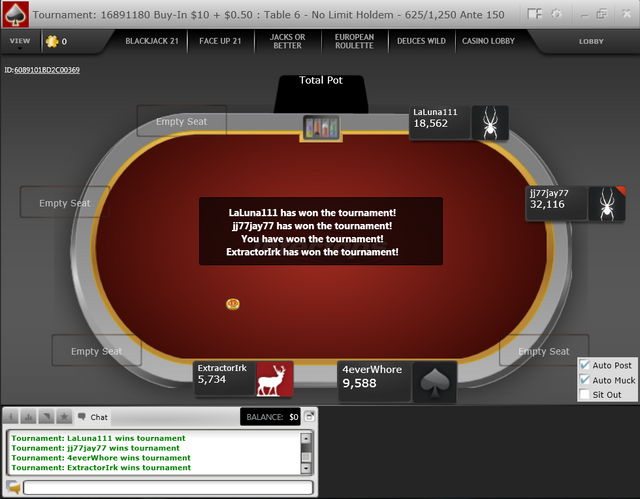 Who else is selected?

I do not know what this site used to be, but now this site will only disappoint me. I have an account on 7 poker sites, but Intertops is the only one from which I never managed to withdraw my money.
R

Inteertops are the worst poker room I know right now. I only registered here for CC freerolls Asking for payment is almost impossible, unprecedentedly unfair! I’m sure this room is dying, so my answer is no!

Intertops sucks!! They have the worst withdrawal restrictions (with respect to freeroll winnings) of all the sites I have played.

I don't see an actual publication date on the article, but pretty sure that it is from around 2013? That's pretty much when the problems all came about with the Revolution network, I think.

Had $1.19 balance left after a five dollar tourney entry and was shaking my head lol..and then won first place for $120 bucks. I felt like the whole time playing on that site was skill based (even though I did get lucky a few times which is normal to win a tournament) I am not expecting to cash out there, and despite their old software, I feel it is a great practice site for playing poker and preparing for live games. And just a fun online site to play on all together. I really have no complaints other then they really should upgrade their software and stop being lazy lol To me it seems like they are leaving money on the table by not upgrading…

Had around 300k chips while most were hovering around 50k. Got to the final table and sat out to get a good game going to make it more challenging…there was a player who folded pocket kings while I was pot building with 87s from lo jack as my stack size had him scared I had aces..wow just wow...It’s sometimes just fun to help others even though I would never do that in a live game, it was a fun experience talking poker and +EV plays. No actual insults in chat, which was shocking lol

Would almost be nice if there could be some ‘mock money’ games going on where when people play online, people can discuss hands in how to improve, but that is hard to host/to do I suppose.
Last edited: Sep 4, 2021

Over the past 2-3 months, they have greatly reduced the guaranteed prize money in tournaments. Up to this point, this room has been quite attractive. Although, there are still worthwhile tournaments. Cash and the SNG are still dead there. Sad.

HELLO I ONLY KNOW THE ROOM BY CARDSCHAT BUT IF THE ROOM BADS .... COMPARED WITH THE REST, SUCKS
7

very little player traffic but I like their tournaments, I stopped playing due to problems with your software but it is a good place to achieve a good bankroll with the cardschat freerolls
A

intertops is ok but its not my best but was one of the 5 sites i play the most....the money tournament is good......but not a lot of freeroll tournament

alabos said:
intertops is ok but its not my best but was one of the 5 sites i play the most....the money tournament is good......but not a lot of freeroll tournament
Click to expand...

How does a place go that long and not housekeep, it is like 1995(8), the internet is cool!!) and it also has old jerks playing there, needs an overhaul for people that care about poker.

I am not sure if the RNG is legit or not, but that software is rusty AF, it's beyond laughable.

Intertops could provide a legit place to play poker, but they are stuck so far in the 90s... even I can't understand the old software logic... *where is Doc Brown! lol
Last edited: Sep 9, 2021
V

Yes, I have to take back my words! About regular and fast withdrawal of money! I can't get my winnings! They write to me that the delay is due to the pandemic (it's just ridiculous)! Now I have no reason left to play in this room!
V

Today I finally got my money! But there is a new problem! Due to the rise in the cost of tickets for step tournaments, all old tickets were cashed out, but unfortunately not in full! I wrote about it to the support service and now I'm waiting for a response! Does anyone have similar problems? And how do you solve them?
B

This site is so interesting to me. I came there a few months ago to play a couple of the CC free rolls, and was immediately struck by the outdated software they use. As many other posters have noted, they REALLY need to update their software. I play mostly low buy-in tourneys and SNGs, and the step tournaments. With the low traffic on the site, some get cancelled for too few entrants, which is a bummer. Some SNGs I’ve signed up for, even just 4-6 max, have kept me waiting for long periods for enough players to start. Sometimes I just give up and unregister.

That said, here are some things I enjoy about the site:

1) The lower number of entrants in tournaments means fewer people to beat out to win or place (though fewer places paid too).

2) There are a decent number of turbo, hyper, and other such quick moving tournaments. I appreciate not having to slog for hours in tourneys with 10 minute blinds.

3) The cards dealt at this site seem to be fair—no miraculous 4-of-a-kind over straight flush over full house over straight (in one hand). On BetOnline, where I’ve played a fair number of low stakes tournaments, you see this kind of stuff ALL of the time! I mean ridiculous cards coming out on the turn and river to produce better hands over previous great hands. I haven’t collected evidence to backup my claim, as I know people will want to see. But I know what I have observed, and it isn’t a one-time miracle. It is happening regularly—typically the big stack holder winning with a crappy hand, over the low stack who has waited patiently for a nice all-in hand like qq, kk, aa, ak,…. Mr. big stack calls with 49os and flops 499. It’s almost predictable to the point where I just don’t want to play there anymore. I do wonder if it only happens at the tourneys with low buy-ins, but haven’t played the higher stakes to really explore that. Anyway, a long-winded way of saying Intertops algorithm for card dealing seems to be random and fair. I have not left a game yet where I felt like it was completely outlandish cards coming off. They occasional bad beat, yes, as one would expect. But not a regular thing every other hand.

4) They offer a decent number of freerolls and step-up tournaments. Nice for building your bankroll, practicing your skills, and earning your way into a big tournament.

I’m hopeful that Intertops will make some improvements to encourage more players—better software and faster payouts seem to be the biggest needs. I’ll keep playing there for now, as they do offer some features that I believe give them potential to be a great site at some point. Time to invest some money on improvements, though.
C

i have played in pokerstars, 888, party poker, ACR, betonline, GG poker, william hill, betfair, unibet, full tilt, betsafe, coolbet and intertops. and by far intertops is the worst poker room of them in my opinion.

Intertops used to be a go to poker room. Theybstill provide free slot tourneys which is how I used to make most of my money on Intertops, even more than I won from Cardschat Intertops freerolls.

But mobile Intertops does not provide omaha hi/lo games, so I do not waste my time earning free money even thougj the slot tournaments are out there.