I still dont quite know why all these sites don't allow U.S. players. Ive heard the only legal problems can come to the actual player in the form of tax law. Ive read that the sites dont even catch any flak, but i found this site thats pretty interesting if there are any other players like myself just trying to find freerolls. Just frustrating..

Lost in the twilight zone

Many of the sites used to allow play in the US. While players may not have as many issues the site could have an issue if they did. Google black Friday 4/15/2011 and you will see the issue.
G

I think it's up to the states, but I am hopeful

Four states have legalized poker. The other states have Ignition, WPN, and Global players can choose from. Bet Online is also an option.
F

When online gambling first emerged, it was outside the law pretty much everywhere, so it was kind of a grey area. Not exactly legal, which is why, most sites operated from exotic places like an indian reservate or Cayman Islands. But not exactly illegal either, since there was no specific law against it.

What has happened since is, that governments around the world has moved to either regulate online gambling or prevent it by making laws and enforcing them on operators. As someone else have already said, you can google "Black Friday".

But this is only part of the total picture, since many sites have voluntarely left markets, which are not regulated. Some sites like partypoker left the US market before Black Friday, and there are many other nationalities, that are also not allowed to play on certain sites. For instance you can read in this forum, that most sites have left the serbian market.

As for those sites still accepting US players, other than from the few regulated states, they are basically breaking US law, which they can only get away with by operating from other countries.

This is not a great situation for players, since it typically mean, that deposit and withdrawals need to be done in creative ways like crypto currency rather than via bank accounts or credit cards. And there is also noone to ensure, that the site is solvent and offer fair games. So its basically a matter of trust, and as a minimum its probably a good idea to not keep to much money deposited on those unregulated sites.

goodsaint said:
Four states have legalized poker. The other states have Ignition, WPN, and Global players can choose from. Bet Online is also an option.
Click to expand...

Merge which has Carbon and Sportsbetting.ag are also an option although you will have a very limited selection of games to play.

Online Poker for US Players

Hello. I go back to when I could play on pokerstars.I miss that. I live in Florida where we have limited online play. I still find enjoyment playing BOL, ACR, SB, and Itops. Unfortunately, it does not look like it will change anytime soon.
Dan'O

mk0523 said:
Merge which has Carbon and Sportsbetting.ag are also an option although you will have a very limited selection of games to play.
Click to expand...

I don't think Carbon is accepting new signup at the moment, at least for US players. Plus, they charge 3% for all withdrawals, even with cryptocurrency and only allow one free withdrawal per calendar year, so I would definitely recommend Ignition, BetOnline, or America's Cardroom to US Players over Carbon regardless.
T

Black Friday on April 15, 2011. Eric Holder who was Obama's attorney general shut down the domains of PokerStars, FullTilt, PartyPoker and others. 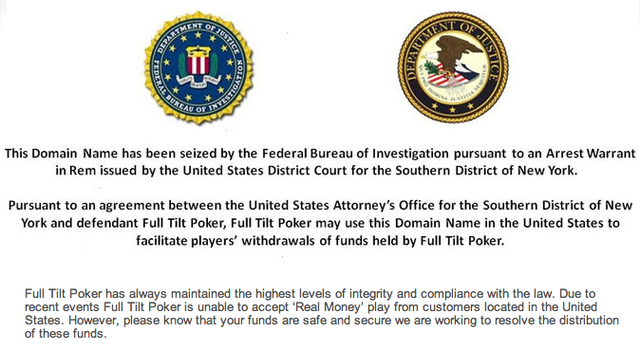 Partypoker was out of USA in 2006 on the first DOJ seize.
D

sadly, we have very little to pick from in the US as players that is even close to trustworthy. On the same note, do we really need our government to be involved?

danoscar said:
Hello. I go back to when I could play on PokerStars.I miss that. I live in Florida where we have limited online play. I still find enjoyment playing BOL, ACR, SB, and Itops. Unfortunately, it does not look like it will change anytime soon.
Dan'O
Click to expand...

I've been playing on BetOnline for awhile and want to cash out soon, but thinking about making a 100% crypto bonus deposit and was wondering if they cash out? Also, what's your opinion of intertops? Can't stand ACR or Carbon or Bovada.

You mind adding me as a friend as I have a few personal questions to ask of you as well.

I sure remember the day of the lockdown.I had over 1500 bucks in neteller,and it was frozen.I didnt think i would ever get it,but after about 6 months,i got every penny of it.
Z

Each state must pass there own bill regarding legal gambling and online poker. I am lucky enough to live in a state where I can play.