Is it advisable to wear dark glasses to face-to-face tournaments?

In the tournaments that I have seen on television, many players in the tournaments wear dark glasses, I imagine they use them to hide their expressions when playing at a poker table, but how advisable it is to wear them, you think they give you some kind of benefit to the bearer who carries them? Personally, some are more nervous with the glasses, It is up to each person but I see it unnecessary.

I think they make it easier to study your opponents without looking like you are staring at them. I still feel a bit silly wearing sun glasses inside though.

In a televised tourney, I'd guess that it could also be to lessen the glare of the lights that they'd be using for the filming. They could also be on speed (amphetamines) which can cause the pupils to dilate and thus be sensitive to any bright lights.

I think scarves became more popular for blocking live tells versus sunglasses from what I've seen. Either way, unless you're playing big buy-in tournaments it probably doesn't matter too much as you won't find professionals picking up minor ticks/tells from your facial expressions.

The sunglasses are to hide the fact that your pupils dilate when you are under stress. The scarf is to cover the Adam's Apple if you swallow hard when stressed. The hoodie is to cover your ears which may turn red from a rise in blood pressure when under stress...Now, here's the catch...your body reacts in the same manner when under stress; good or bad. For example, you may feel stress planning your own wedding, which is a happy event. You would also feel stress if you just lost your job...so, unless you are either an experienced poker pro or a clinical psychologist, you won't be able to know the difference between a player's tells if they have "the Nuts" or are bluffing.

TeUnit said:
I think they make it easier to study your opponents without looking like you are staring at them. I still feel a bit silly wearing sun glasses inside though.
Click to expand...

You could also do what this CardsChat Poker Guru does. 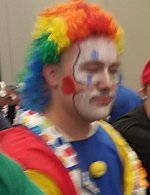 Zorba said:
You could also do what this CardsChat Poker Guru does.

That's exactly why I wear them. To study players without them knowing I'm looking at them.

Miguelpaniura0893 said:
In the tournaments that I have seen on television, many players in the tournaments wear dark glasses, I imagine they use them to hide their expressions when playing at a poker table, but how advisable it is to wear them, you think they give you some kind of benefit to the bearer who carries them? Personally, some are more nervous with the glasses, It is up to each person but I see it unnecessary.
Click to expand...

I like to use, a friend of mine, excellent live poker´s player, he told me once: "eyes never lies" since then I use sunglasses when playing.
D

If you can't have the poker face ,,(no expressions ) then sunglasses is a must .or you will be a looser
Z

Personally, I am not a person of many add-ons.
But sunglasses come in handy when it comes to lying, especially for me.
I still don't have a poker face
S

I use sunglasses while playing

I feel very uncomfortable when people stare at me, it makes me feel nervous, so very early in my poker career (it's not a career, its just my hobby), I used to wear sunglasses at the table... I guess I thought it was "cool" to wear them and it took away a lot of my nervousness.

But I quickly realized there is a big flaw when you wear sunglasses... the problem is, you can EASILY mis-read your own hand!! It's very dark when you peek at your cards, and the sunglasses makes it even worse. So it wasn't very long before I gave up wearing them indoors, now I just think it is dumb to wear them... and I just deal with feeling uncomfortable when I get stared down by an opponent. Over the years, this feeling has gotten better, it no longer bothers me too much. I think stare-downs are overrated anyway, you can play an entire poker tournament and never bother to look at your opponent, it really isn't necessary and I think the whole idea of "tells" is highly overrated. I have never once changed my decision based upon something I see my opponent doing, in fact, if they are doing something weird (such as acting nervous or acting disinterested in the hand) they are most likely doing it as a bluff... it is a technique called "doing the opposite". If they have a monster, they try to appear nervous or pretend they don't care about the outcome... so long ago I stopped trying to "read" my opponent's body language, and I feel comfortable that they can't ever read mine either, I am able to use the same motions no matter what hand I have, a monster or a bluff. I just develop a routine and I stick to it, and the longer I play this game, the less nervous I get at the tables.
R

Most of all, the state of a person is given out by the eyes and then by his movements.

I play live quite a bit and can tell you that at every table there is a hawk lol - the higher the buy in, the more hawks and its totally a good part of the game as our body language can be crucial.
From sudden movements, bet patterns, pupil dilation, veins bulging in the neck and a rapid pulse to even the old adams apple moving up and down, there are so many ways you can potentially get a read on someone, i always pay particular attention to those players who are focused on me - direct eye contact can be negated by dark glasses for sure but i tend to zone in on bet sizing and position, number of raises and check raises that player has made.
I would advise that if you feel comfortable wearing dark glasses/shades do it but be mindful of all of the other things that can maybe give you away!

It depends.... if you know you have some ticks with eyes, doing face images, touching your eyes.... then YES ! It will cover some of your ticks.
As players mentioned above, whole body is making tics and more experienced players can actually read those things. Even I can read some when playing house games, sometimes at live tournament also. And I can see that I'm reading more and more like that. I put sunglasses in mid of tourney and I'm taking them off when I don't play, I put them when I call with good cards but also when I bluff. I don't need them at early stages of mtt but later... salvation.
But ! If you think you don't have those body language ticks- play without them. It's more fun looking at opponents eyes without a blink....like western movies
Stay healthy !

I have studied a lot on tells, and so far I cannot pick up on any that I have learned, perhaps I am not doing it right, there is that possibility for sure lol. I will say that as much as I thought it would benefit me to wear shades, they only get in the way for the tournaments that I play. There just isn't enough money involved IMO to wear sunglasses, I think the benefit of having good lighting far outweighs hiding any kind of "tell" that daily tournament players "may" pick up on.

I take that back, when I got to the final table, I could tell people were really watching everything I was doing...perhaps I will use the Prescription Ray Bans I bought just for Poker lol come final table in the future, although I may feel a bit awkward.

This is just my experience playing regular tournaments that are low buy-in.

I will say this, I am going to dress down in the future, I had a dude shove on me wearing a garage mechanic shirt, and it threw me off. I need to get that same type shirt Was Genius of that dude.
Last edited: Dec 21, 2021

I've never played live tournaments, but if you think your eyes will somehow give you the hand you have, then I advise you to use it
M

I have played for serveral years cash games , and never wore them . I don't like playing with them cause I would constatly have to take them off to see cards on board , and I don't want to missplay cause of them . I'd rather study my opponents in so many other ways :icon_sant
Happy holidays everyone

I have never played live tournaments, just some games with friends ... But I watch a lot of tournaments on TV and the Internet ... And I think it depends on you as a player if you think that you give signals with your eyes I suppose you have to use them or for what the opposites do not notice that you are looking at them ...

facemask since 2020 helps a little to desgise you rintentions in poker, also dark glasses tend to get nervous some people that can help
L

Yes i prefer to wear sunglasses because the lights in a casino r much too bright and its fashionable:icon_sant
E

I feel like this is a pretty straight forward "If it works for you do it" situation lol.

I imagine everyone you see wearing them on TV has decided it's more beneficial to wear them so they do.