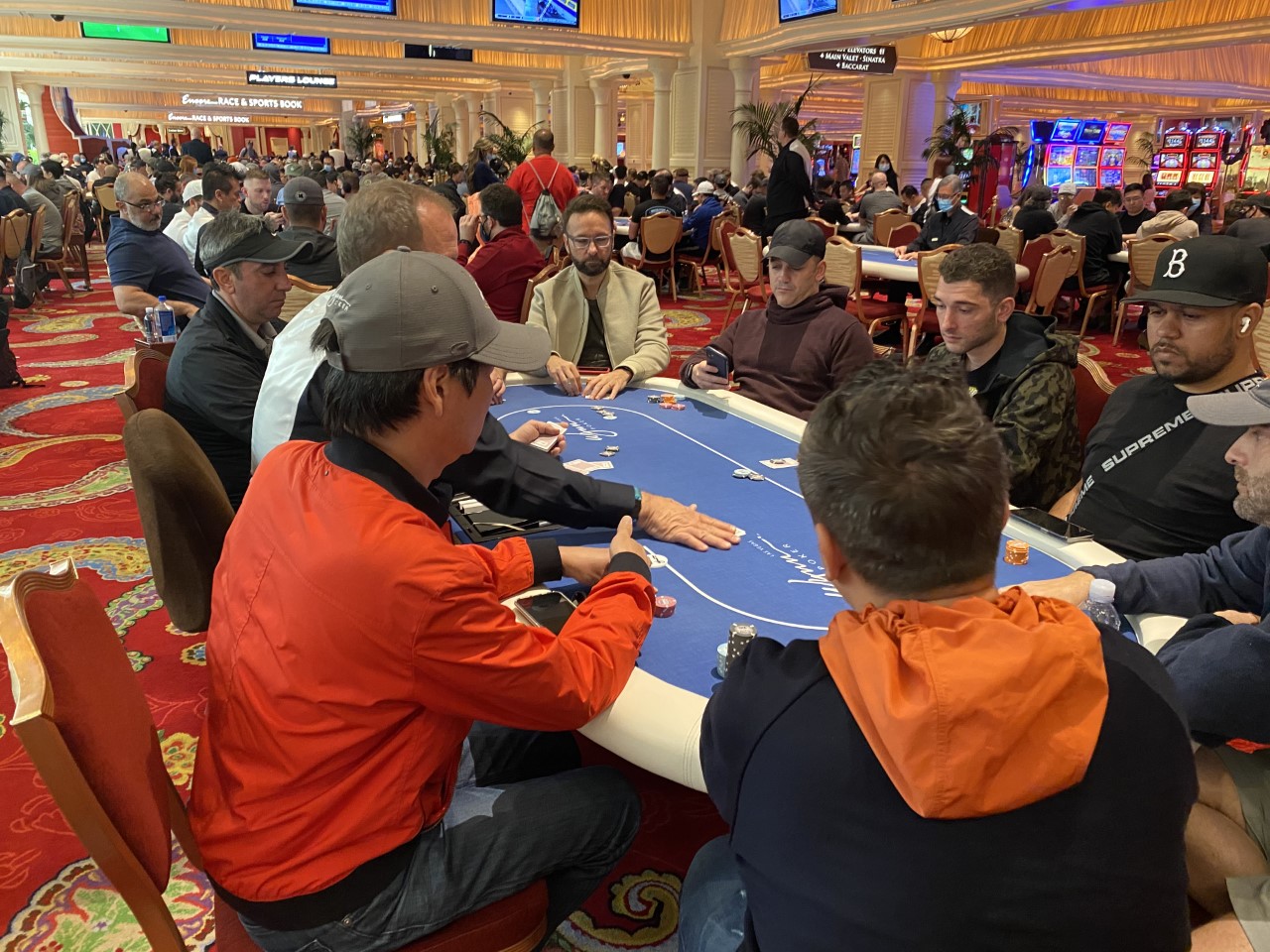 Even Daniel Negreanu came out to compete in the new Wynn Millions event. (Image: CardsChat News)

On Day 1B (Saturday), Wynn Executive Director of Poker Operations Ryan Beauregard told CardsChat News he was “95% certain we’ll hit the guarantee.” But he admitted he was a tad nervous heading into the final starting flight on Sunday.

According to Beauregard, who previously worked in a similar position at the Wynn property in Macau, China, if the tournament failed to bring in enough players to hit the promised prize pool, the poker department would be on the hook for the overlay, not the casino.

Fortunately, for the card room, Day 1C was quite large. On Day 1A, 263 players registered and then 389 on Saturday, bringing the total to 652 buy-ins for the first two sessions.

The tournament space adjacent to the main poker room was packed on the first day of the Wynn Millions. Dozens of tables were spread out just around the corner from the Encore Beach Club, a popular dude-bro spot.

A slew of familiar faces made their way to the poker tables on Day 1A of the Wynn Millions, including Daniel Negreanu, who doubled up with quads on the first hand. But his fast start was short-lived, and the struggling poker pro busted not once on Friday, but twice. Other big names who failed to bag chips included Erik Seidel, Shaun Deeb, Kristen Bicknell, Andrew Lichtenberger, and the reigning WSOP Main Event Champion, Damian Salas.

The Wynn poker room had less reason to be concerned the guarantee wouldn’t hit on Saturday as the field size increased by 389 players. Negreanu was again among those in attendance, firing his third bullet of the tournament. And just like Friday, he walked away empty-handed.

Brian Hastings, Johnny Chan, Eli Elezra, and John Hennigan were among the high-profile players who joined Negreanu out the door. Kristen Bicknell, on the other hand, avenged her Day 1A bust-out by bagging one of the biggest stacks on Day 1B (282,000). Salas, the 2020 world champion, also made it through this time around (108,000). Brian Altman, the reigning World Poker Tour Player of the Year fresh off his third WPT title, also bagged chips (114,000).

But the player of the day was the all-time winningest live tournament player, Bryn Kenney, who went home with a massive stack (376,500).

Shortly after the noon start time on Sunday, the Wynn Millions tournament surpassed the $10 million guarantee. In total, the session attracted 676 entries, bringing the overall tally to 1,328 entries, creating a prize pool of $13,280,000. Negreanu, yet again, gave it the old college try. This time around, the GGPoker ambassador, bagged some chips (77,500).

The winner of the Wynn Millions, who will be crowned on July 2, will walk away with $2,018,866, and the runner-up will also receive a seven-figure payday ($1,248,886). There are 501 players remaining and Day 2 begins at noon PT on Monday from the Las Vegas Strip resort.

Love to see the Wynn thriving – it is a great poker room!