Stoyan Madanzhiev is your 2020 WSOP Main Event champion. Well, kind of. The Bulgarian pro shipped the online version of poker’s most prestigious annual tournament. He earned an online poker tournament record $3.9 million prize. And now, the poker community can start debating if he should be considered a world champion or not. 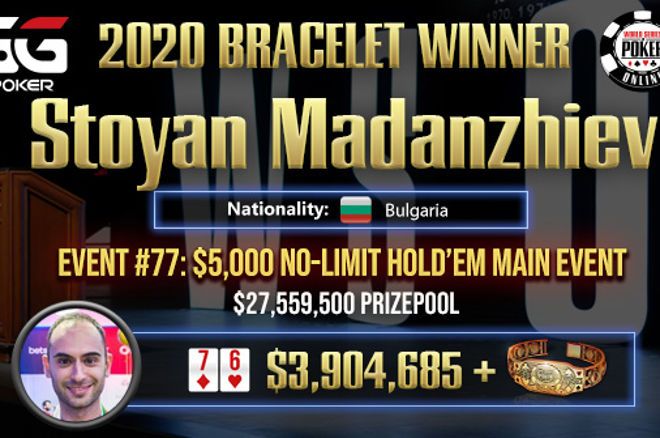 Is Stoyan Madanzhiev the reigning world champion or not? (Image: Twitter/WSOP)

Hossein Ensan won poker’s annual world championship event in Las Vegas last year at the 50th annual WSOP. The German pro received $10 million and was, as had been the case for the previous 49 years, crowned poker’s world champion.

But 2020 has been a strange year with a global health pandemic forcing the postponement and, potentially, eventual cancellation, of the live World Series of Poker at the Rio. So, is Ensan still the reigning world champion or should that title be handed over to Madanzhiev?

WSOP organizers are still hopeful for a fall series, although a full series seems unlikely given the continued spread of COVID-19 in the US. Rumors have been circulating about hosting the WSOP Main Event in Las Vegas as a standalone tournament. Should that occur, Madanzhiev’s reign as world champ would quickly come to an end, if it ever began.

Whether or not the GGPoker WSOP Main Event winner should be considered the true 2020 world champion, Madanzhiev did win an historic poker event. The $5,000 buy-in tournament generated  more than $27 million in prize money, the most in online poker history. And the champion’s $3.9 million score is the biggest first-place prize ever for an online poker tournament.

Twenty sessions into the WSOP Main Event, out of 23 total, it appeared overlay was inevitable. GGPoker guaranteed that $25 million in prize money would be awarded. An influx of players registering for the final few sessions ensured there was no overlay.

Bryan Piccioli, whose screen name “smbdySUCKme” triggered some poker players, entered the final session with the chip lead. But he didn’t last long and was eliminated in 23rd place, good for $79,625.

Benjamin Rolle was also one of 38 players to advance to Day 3. You may be familiar with Rolle under his long-time online screen name “bencb79.” He proved yet again why he’s one of the best online poker players ever, finishing 11th out of 5,802 to win $161,686.

The final table didn’t have any past bracelet winners, but it did have Steffan Schillhabel, one of the top German high rollers in the game. Schillhabel was eliminated in seventh place for $467,825.

After Wengling Gao eliminated Tyler Rueger in third place ($1,928,887), that set up what figured to be a lengthy heads-up match, which is customary in the WSOP Main Event. Both players were almost deadlocked in chips.

Madanzhiev won a few quick pots to pull out a 2-1 chip advantage. He then picked up the dream flop (3-4-5) while holding 6-7 against Gao’s pocket aces. As you may have guessed, all the money went into the pot when the 8 landed on the turn. Gao was drawing dead and the tournament came to an abrupt end. Gao received $2,748,605.

Madanzhiev earned $3,904,686 and a gold bracelet for winning the GGPoker version of the WSOP Main Event. Shortly afterward, he took a brief video of his celebratory reaction.