Those who claim online poker is rigged should watch the final hand on Day 7 of the 2018 WSOP Main Event. A three-way all-in cooler for the ages secured a spot at the final table, and at least $1 million, for nine lucky – and skilled – players, including 2009 world champion Joe Cada. 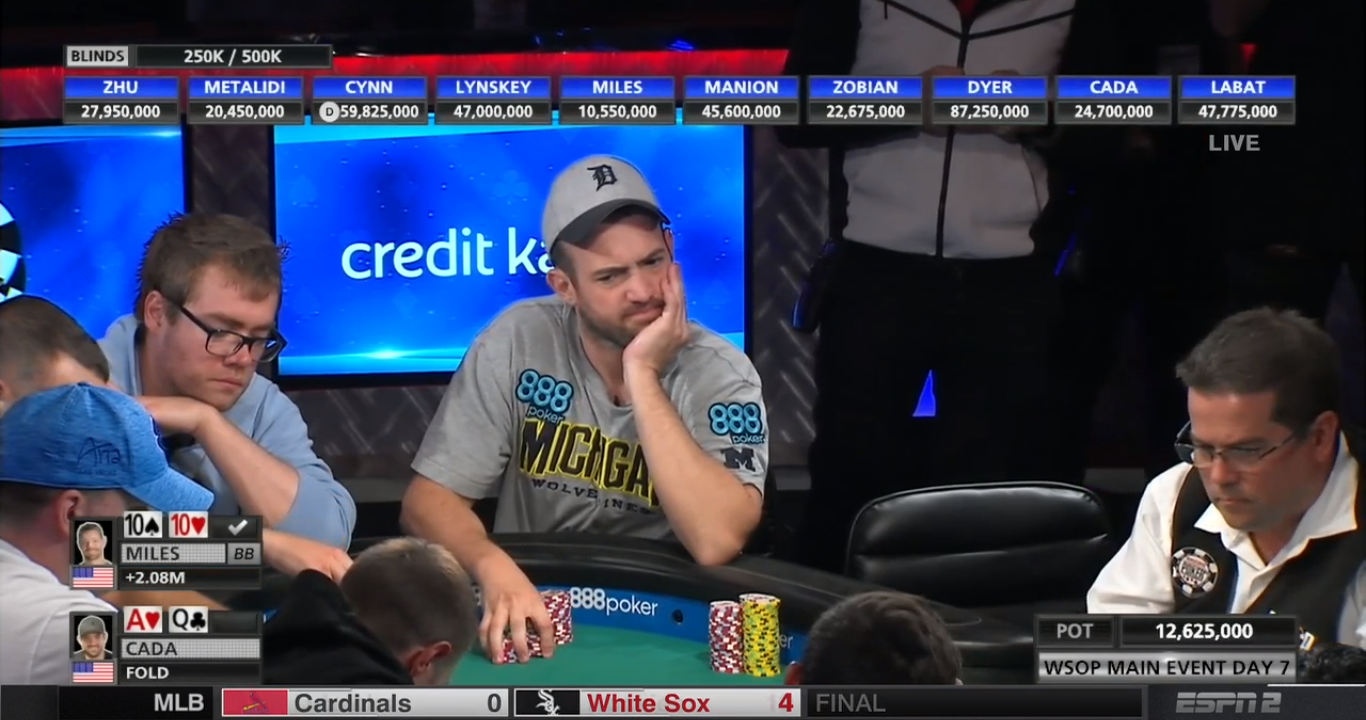 Joe Cada (center) continues his historic run at the 2018 WSOP with a return to the Main Event final table. (Image: ESPN 2)

For the first time in history, the Main Event took a back seat to another poker tournament — $5,000 No-Limit Hold’em — where Phil Hellmuth was making history by extending his bracelet record to 15. Dozens of fans who were watching the Main Event in the Amazon room at the Rio walked down the hall to the Brasilia room to catch of glimpse of the Poker Brat in action.

But after Hellmuth polished off heads-up opponent Steven Wolansky, fans returned to the Amazon room to watch Cada make history of his own.

Bluff of the Year?

Cada, the 2009 Main Event champion who won his second WSOP bracelet earlier this summer, is back at the final table with a chance to do the seemingly impossible: Win two Main Event titles in the modern era.

Cada avoided busting on the final table bubble with a bit of luck and by pulling off one of the best bluffs of the summer. He sucked out in one all-in situation to survive, and then escaped elimination again when his river bluff got his opponent to fold top pair.

With 12 players remaining and Cada down to 12 million chips, well below-average, he tangled with big stack Alex Lynskey, who was over 51 million.

After opening on the button to 1.1 million pre-flop and getting looked up by Lynskey in the big blind, Cada made a 1 million continuation bet on the flop and got called.

Lynskey checked the turn and the 2009 world champion refused to give up, so he fired out a 2.6 million bet and again received a call.

After Lynskey checked the blank river card, Cada had a decision to make. Knowing he could only win by betting and would be short stacked if he gave up and checked, he fired a third barrel, this time for his remaining 7.1 million chips.

His opponent tanked for three minutes before mucking his cards. Had he made the call, Cada would have been out in 12th place. Instead, he’s still alive with a chance to win his second Main Event title.

Some complain that online poker is rigged (it isn’t) because there are so many sick hands dealt. But bad beats and coolers also happen in live poker. They even occur at the Main Event unofficial final table. And the hand that burst the final table bubble was one that won’t soon be forgotten.

Neither player holding kings hit a flush or straight, so Manion scooped the pot, busting Zhu in 10th place ($850,025). The insane cooler left Labat with the smallest stack when the final table begins at 5:30 pm PT on Thursday.

Manion, thanks to the final hand on Wednesday, is now the chip leader.

Fans can watch the final table on a 30-minute delay in its entirety on ESPN starting at 6 pm PT on Thursday. The session will conclude after three players are eliminated. A champion will be crowned on Saturday.

The comment about one hand showing coolers happen live and online poker isn’t rigged is the most self-defeating, asinine comment possible. A one hand sample size LOLOLOLOLOL!!!