Day 2 of the World Series of Poker Main Event is now halfway complete, as the remaining players from the first two starting flights returned on Wednesday in an attempt to survive and advance. When the dust settled, only about 650 players moved on to Day 3, keeping their dreams of a Main Event bracelet alive. 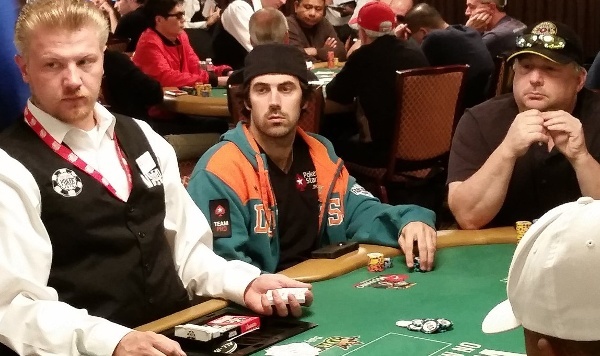 Jason Mercier was one of the many notables who failed to advance through Day 2AB. (Image: CardsChat.com)

Leading the pack early in the evening and holding that spot until the chips were bagged at the end of the night was Amar Anand, who finished play with 603,500 chips, more than 100,000 more than the man in second position, Calvin Lee. Anand has no previous cashes at the World Series of Poker, and only one previous cash for $750 in the Hendon Mob database, but he’s in excellent position to change all of that over the course of the next week.

The rest of the top five is rounded out by Luther Tran, Charles Chattha, and Alan Mastic, all of whom have 400,000 chips or more heading into Day 3. But you don’t have to go very much further down the chip counts to find some big name pros who are right in the thick of things.

In tenth place is Brian Hastings, with 367,300 chips. Hastings already has two wins and six cashes in this year’s WSOP, having collected bracelets in the $10,000 Seven Card Stud Championship and the $1,500 Ten-Game Mix. A deep run by the New Yorker could give him a shot at the GPI WSOP Player of the Year award, as he currently sits in fifth place.

In 14th place is Jake Cody, who finished the day with 340,100 chips. Cody, the 2011 WSOP Heads Up No Limit Hold’em Championship winner, has yet to cash in this year’s World Series, but is poised to make a deep run.

Other notables with big stacks include Vivek Rajkumar, Australian cricketer Shane Warne, Mel Wiener, Christian Harder, and Mike Matusow, all of whom bagged top 100 stacks to end their Day 2. A bit further down in the chip counts are Jonathan Duhamel, George Danzer, Daniel Colman, and Greg Raymer, among others.

On Wednesday, flights A and B were separated into two different rooms throughout the day. 1A players were in the Amazon Room, while the larger 1B field was put in the Pavilion and Brasilia Rooms. But even their combined numbers won’t compare to the Day 2C field, which will bring back 2,765 players spread across all three rooms for ten more hours of play on Thursday.

There will be plenty of notables to keep your eyes on throughout Thursday’s play, many of whom have solid stacks to start play. They include Daniel Negreanu, Phil Hellmuth, Allen Cunningman, Michael Mizrachi, Jamie Gold, and Joe Hachem, among countless others dotted throughout the field.