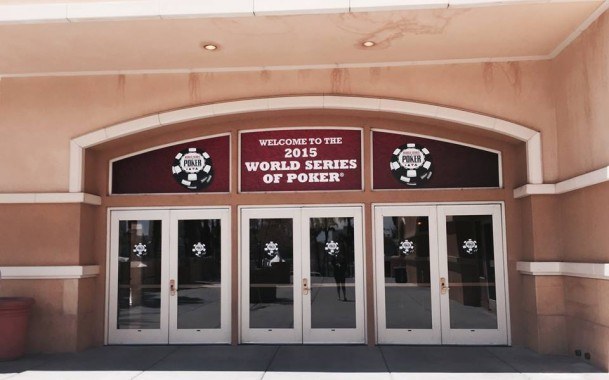 The WSOP Day Two is underway, with many well-known players already on the felt. (Image: CardsChat.com exclusive)

WSOP Day Two is now officially underway, with two tournaments already having played through a day on Wednesday to kick off the action.

That means hundreds of players have already busted out of their first event, and we also have our first chip leaders to report, including some prominent names who are hoping to get their WSOP summers off to a fast start.

The first open tournament of the 2015 WSOP is Event #2, the $5,000 No Limit Hold’em event. The early start day and the mid-level buy-in guaranteed that this wouldn’t be a massive tournament, but it certainly put some money into play: with 422 entries, there’s nearly $2 million in the prize pool, and the winner will walk away with $466,120.

At the end of Day 1, only 171 players were still alive in this event. Only 45 of them will make the money (a minimum cash is $9,381), but there are plenty of familiar faces who are in good position to make their first run of the series.

You don’t have to look very far down the leaderboard to find them, either. Joe Ebanks began Day Two third in chips, while defending Main Event champion Martin Jacobson is snuggly positioned in seventh place.

Others with very healthy stacks include Jonathan Jaffe (11th), Joseph Cheong (17th), Greg Merson (21st), Amir Lehavot (28th) and Antonio Esfandiari (29th). There are so many “name” players left in the tournament, it’s impossible to list them all: Bryn Kenney, Martin Finger, Andy Frankenberger, and Brian Rast are all inside the top 50, and David Sands, Maria Ho, Jon Racener, Phil Hellmuth, Jonathan Duhamel, Chris Moorman, Jason Somerville and Jake Cody are just a few of the other players still peppering the field.

The chip leader, however, is Darryl Ronconi, who bagged 211,100 chips at the end of Day 1. A tournament veteran with over $1.25 million in career cashes, Ronconi is no stranger to deep runs at the WSOP, though he has never won an event: his best finish was 2nd in a $5,000 No Limit Hold’em “Triple Chance” event in 2011.

The Casino Employees No Limit Hold’em tournament may not have the biggest prize pool or the most illustrious players, but it is always Event #1 in the WSOP, giving those in the gaming industry a chance to compete against their peers. This year, 688 players took to the felt for the first event of the World Series, competing for a prize pool of $344,000.

By the end of Day 1, the money bubble had already broken: 72 players would cash, and only 51 made it to Day 2. At the top of the heap was Stephen Gilbert, who bagged 236,500 chips to narrowly finish ahead of Blake Robbins, who had held the chip lead for most of the day.

The Casino Employees event features a fast structure by WSOP standards, and is expected to play down to a winner on Thursday. The eventual champion will take home $75,704.

Everyone is waiting to see just what the final total will be for the Colossus, the mammoth $565 buy-in event that starts Friday and features four separate starting flights. One thing is for certain: seats in at least a couple flights are starting to be hard to come by.

Late Wednesday night, the WSOP announced that there were just over 400 seats remaining in flight 1A, which begins Friday at 10 am, and 1,213 left for flight 1C, which starts at the same time on Saturday. That doesn’t include the “late wave” starts that will allow more players to pile into the field mid-flight, but if you planned on playing from the beginning in one of the morning flights, you may have to act fast.

As mentioned, the Casino Employees event will crown a champion on Thursday, which means that today will see the first final table of the WSOP. There are also two more events starting today: a $1,500 buy-in Omaha Hi/Low Eight or Better tournament, and a $3,000 No Limit Hold’em Shootout.