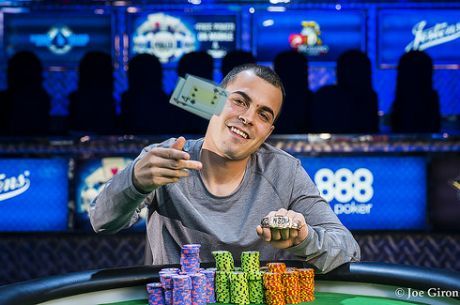 Cord Garcia won the first-ever Colossus for a $638,880 take down, a first-place prize that some players found low for the size of the entry field. (Image: Joe Giron/WSOP.com)

Cord Garcia can now own a first, as the first-ever to beat out a field of 22,000+ players at the inaugural Colossus at WSOP 2015.

The World Series of Poker awarded three more bracelets on a very busy Wednesday, as there were seven events happening throughout the day. That included crowning the Colossus winner in the sometimes-controversial tournament that started with more than 22,000 players last Friday.

Cord Garcia, apparently aka “Lance” per his Hendon Mob page, came into the Colossus with a little over $400,000 in career tournament earnings, but no WSOP cashes or signature wins. Now he has both, as he became the winner of the largest live poker tournament in history, winning $638,880 in the process.

Henson and Garcia are friends, and both have had success on the WSOP Circuit. Henson has won four Circuit rings, including winning the biggest tournament in WSOP Circuit history earlier this year, while Garcia has one Circuit ring of his own.

But while Henson had one large WSOP cash in the past (he finished 12th in the 2007 Main Event, winning nearly half a million dollars), this was a coming out party for Garcia.

“Definitely, it feel like it is my breakthrough,” Garcia told WSOP.com. “But at the same time, I feel like I am capable of doing bigger things.”

To put a final wrap on the Colossus, there were some amazing numbers to come out of this event. Of the 22,374 entries, there were 14,284 unique players (remember, players could reenter in later flights if they wished to), and an astounding 5,664 had never before played in a WSOP event, meaning the tournament did exactly what it was supposed to, namely, it brought new blood to the World Series of Poker.

Max Pescatori is no stranger to WSOP success either, having previously won bracelets in 2006 and 2008. He can now add a third to his collection, as he won the $1,500 Razz tournament on Wednesday.

The victory made Pescatori the first Italian player with three career bracelets, though he downplayed the significance of that accomplishment.

“Actually, I was the only player with two gold bracelets before this one,” Pescatori told reporters. “Now, with a two-bracelet lead, they all have some catching up to do.”

Pescatori had plenty of competition down the stretch. Two-time bracelet winner Eli Elezra made it all the way to the final table before bowing out in fifth place, while Cyndy Violette made a deep run of her own, cashing in ninth.

Pescatori won $155,947 for his first place finish, bringing his career winnings to more than $3.7 million.

Paul Michaelis has plenty of tournament experience in Europe, but unlike the other two winners on Wednesday, he wouldn’t consider himself a poker pro. The 24-year-old German student, who currently lives in Vienna, just recently finished getting his bachelor’s degree and says that his studies are likely to continue for some time.

But that dedication to school didn’t stop Michaelis from coming to the WSOP and finding success. After winning a little over $2,000 in the Colossus (his first-ever WSOP cash), he took those winnings and reinvested them into the $1,500 Pot Limit Hold’em tournament, ultimately turning that entry into a first place finish, a gold bracelet, and $189,818. 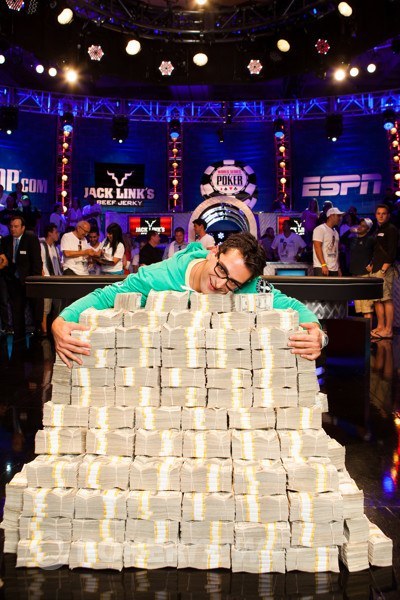 Best-known for his 2012 WSOP Big One for One Drop $18M win, Antonio Esfandiari continues to be a WSOP fixture and crowd favorite. (Image: WSOP.com)

Pot Limit Hold’em is a pretty obscure game compared to its more popular cousin, Pot Limit Omaha, but the tournament still drew over 600 players, including some big name pros.

Notables such as Antonio Esfandiari and Eric Baldwin made it into the money, and Michaelis had one last formidable foe to deal with in heads up play in Tom Marchese, who already had ten WSOP cashes to his credit.

But Michaelis started heads-up play with the chip lead, and while there was a tightly-contested battle for a while, it was only a matter of time before Michaelis pulled away. According to Michaelis, this came as no surprise after how the final table played out.

“I was running insane basically,” Michaelis told WSOP.com. “I had a straight flush against a nut flush, I had a couple sets.”

The $10,000 Heads-Up No Limit Championship has reached its final, as Paul Volpe will take on Keith Lehr for a prize of $334,430 (the runner-up receiving $206,620). While Volpe quickly dispatched with Matthew Cooper in their semifinal match, Lehr had a much tougher task, battling with Dee Tiller for nearly three hours before earning his spot in the finals.

Volpe and Lehr will face off at 1 pm PT on Thursday to decide who claims the heads-up championship. Regardless of who wins, it will mark their second WSOP bracelet: Volpe won last year’s $10,000 No Limit Deuce-to-Seven Single Draw Championship, while Lehr won a $3,000 Pot Limit Hold’em tournament back in 2003.

Several events will continue on Thursday, and there are still notables left in each field.

In the $1,500 Limit Hold’em event, Shannon Shorr currently sits in third place of 28 remaining players, with David Chiu and Brandon Cantu also in the mix. The $1,500 Six-Handed No Limit Hold’em event has bracelet-winner Bryan Campanello in the chip lead heading into Day 2, while Mike Watson, David Benyamine and Scott Seiver are all enjoying healthy stacks.

Over in the $2,500 Omaha/Seven Card Stud Hi/Lo tournament, none other than six-time bracelet winner Layne Flack leads the 264 remaining players into Day 2. He’s got plenty of familiar company near the top of the leaderboard, however: Maria Ho, Scott Clements, Barry Shulman and Todd Brunson are all within striking distance, as is beloved ESPN commentator Norman Chad.

Two more events join the already crowded field on Thursday. If you haven’t gotten enough of Pot Limit Hold’em yet, you can watch some of the world’s best battle it out in the $10,000 Championship tournament in that format beginning at 4 pm PT.

More popular will likely be the $1,500 No Limit Hold’em Shootout, which kicks off at noon today.

Did anybody see the ending of Colossus wow.