Jeff Madsen is now part of the Year of the Pro at World Series of Poker 2015. Yesterday, he took down his fourth WSOP bracelet.

The World Series of Poker had three events with a chance to wrap up on Tuesday, but as we noted yesterday, none of them were certain to do so. In the end, only one bracelet was awarded during a long day of play, and it went to Madsen. 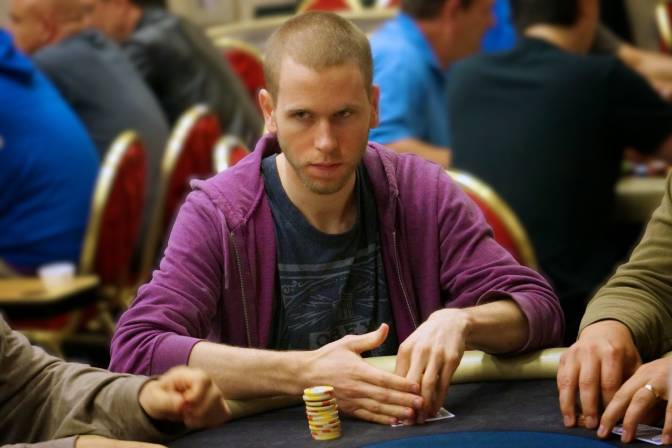 Well on his way to the poker stratosphere with his fourth WSOP bracelet, Jeff Madsen scooped the $3K PLO Hi/Lo event on Tues. (Image: answers.com)

The young pro, who ranks in the top 100 of all US players on Hendon Mob, finally finished off Jean-Marc Thomas in heads-up play at about 1 am PT Wednesday morning to clinch the title and collect the top prize of $301,413.

The win is Madsen’s fourth at the WSOP, having previously won two bracelets in 2006 and another in 2013. That 2013 bracelet also came from a Pot Limit Omaha event.

For Madsen, the win is part of a rapid rise up the ranks of the WSOP elite, as he’s collected his four bracelets at the tender age of 30. But he says that chasing down a place in the record books isn’t really on his mind, at least not yet.

“When I started out, I wasn’t thinking about winning 14 gold bracelets,” Madsen told WSOP.com. “If I just keep playing my game, I’ll rank up the stats.”

The Monster Stack was originally set to conclude on Tuesday, but that was going to take some fast play to accomplish. In the end, players and organizers were content to reach a final table and call it a night, allowing the final nine to come back on Wednesday to find a winner. 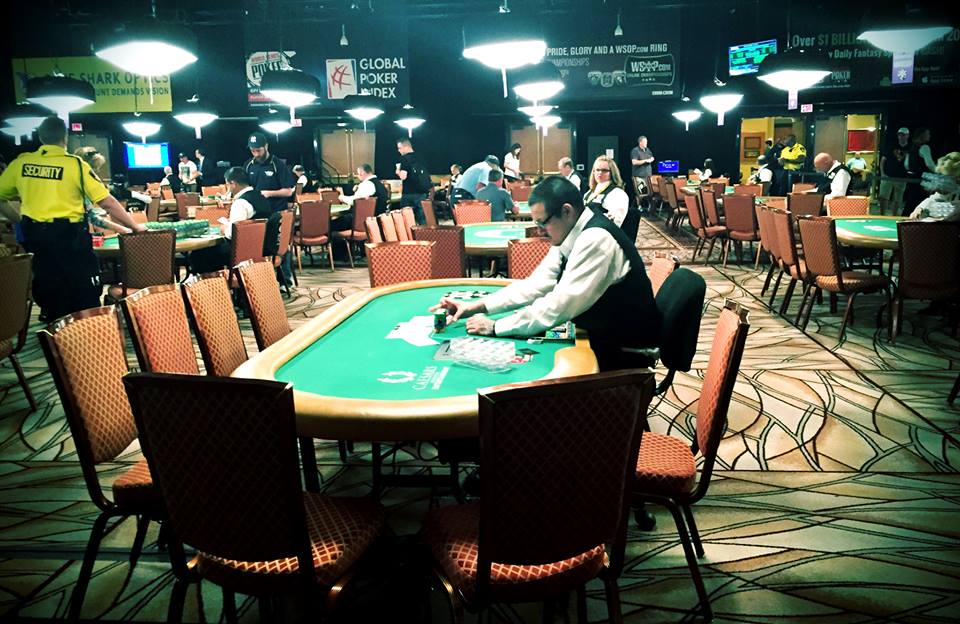 Calm before the storm: WSOP 2015 dealers get ready for the action before start of play on Day 22 of the World Series of Poker. (Image: CardsChat.com exclusive)

Heading into the last day of play, the chip lead belongs to Fernando Konishi, a Brazilian player who is making his first-ever cash at the WSOP. With 20.8 million in chips, that first score might be an enormous one, as first place is worth $1,286,942, and everyone at the final table has already clinched a prize of over $100,000.

A pair of bracelet winners are still in the mix as well. Two-time winner Hoyt Corkins had the chip lead heading into Day 4, and still sits in fourth place with just under 13 million at start of day today, while Asi Moshe is now sitting in second place with more than 14.7 million in his stack.

The $1,000 No Limit Hold’em tournament came very close to finishing on Tuesday, but was also extended into an additional day after a winner could not be determined by 2 am Pacific Time. Argentina’s Franco Ivan Luca and Artur Rudziankov of the Czech Republic will come back on Wednesday to decide who will win the tournament, with Luca holding about a 2.6-1 chip lead when heads up play resumes.

With the blinds quite high and only the two players remaining in contention, this one shouldn’t take too long to resolve. The players will restart play at 1 pm PT on Wednesday, with the winner taking $353,391 and the runner-up settling for $219,976.

The $5,000 No Limit Hold’em Six-Handed event broke its money bubble on Tuesday, playing down to the last 20 players before wrapping up for the night. The chip leader heading into Wednesday is Australia’s James Obst, who will be looking to chase down his first WSOP bracelet.

Obst bagged nearly double what anyone else had at the end of Tuesday’s play, but there are plenty in the field capable of building a stack and overtaking him. A few of the notable contenders among the final 20 include Tuan Le, Jennifer Tilly, former Main Event Final Tabler Jorryt van Hoof, Mike Gorodinsky, and Jason Mercier.

The $1,500 Limit Deuce-to-Seven Triple Draw event is also closing in on a winner, as there are only 16 players remaining in the field following Tuesday’s play. Toby Mulloy has the chip lead, and will score his first-ever WSOP cash in this event. Other notables who could still win this bracelet include Jon Turner, Brock Parker, Dutch Boyd, and Steve Billirakis.

The $1,500 Split Format Hold’em event drew 873 players on Tuesday, with 159 of them returning for Day 2 today. Matt Iles leads the field, with a few notables like Christian Harder, Ben Volpe, Natasha Barbour, and Martin Jacobson scattered throughout the field.

This tournament is notable because of its ever-changing format. Day 1 featured nine-handed play, while Wednesday will watch the players play six-handed until 32 remain. Those players will then return on Day 3 to play in a heads-up knockout format until a final table of eight is reached.

Tuesday also saw the beginning of the $3,000 H.O.R.S.E. event, which drew a solid 376 players. Not surprisingly, many top pros have climbed to the leaderboard of this mixed event at the end of Day 1. Eli Elezra is the overall chip leader, with John Monnette, David Benyamine, Daniel Idema, and Barry Greenstein not far behind.

We could potentially see as many as four bracelets awarded on Wednesday. The Monster Stack and the $1,000 No Limit Hold’em events will clearly finish up without a problem, and both the $5,000 No Limit Hold’em Six-Handed tournament and the $1,500 Deuce-to-Seven Triple Draw event are down to 20 players or less, meaning they could wrap up late in the day. 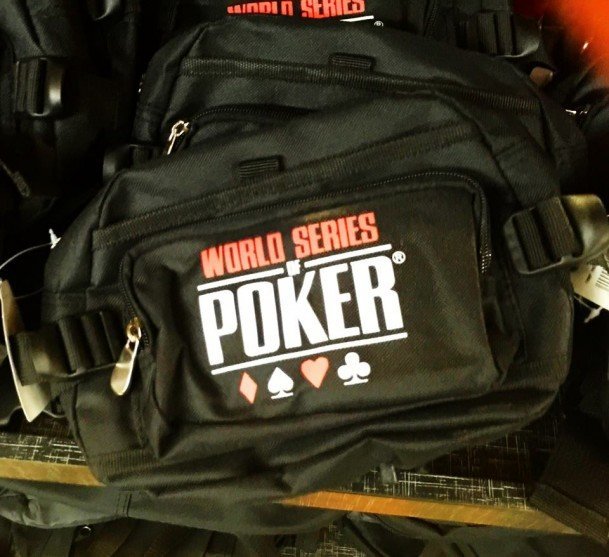 With all that going on, there will also be two more new events on the schedule. A $1,500 Pot Limit Omaha tournament starts up at noon, and based on how well the $1,000 PLO event did earlier in the series, expect a big field to turn out for this one as well.

The afternoon will see the $10,000 No Limit Hold’em Six-Handed Championship event kick off. This one will feature a tough field, but one that’s not quite as small as some of the other $10,000 buy-in events.

Expect a lot of top pros (including some just coming off the $5,000 version of this event) mixed with some amateurs who enjoy the faster pace of six-handed play.

Wow 4 bracelets he must be good never heard of this guy I need to read up more on him. I never seen him play but he must be a great player.

Wow 4 bracelets he must be good never heard of this guy I need to read up more on him. I never seen him play but he must be a great player.