The Monster Stack lived up to its reputation, drawing a monstrous crowd for its first flight on Friday. And while no bracelets were awarded yesterday, several tournaments are close to concluding, with three at their final tables heading into the start of play for WSOP Day 18.

Successful Day 1A for Monster Stack

The Monster Stack has become one of the biggest events on the WSOP calendar, offering a buy-in low enough for many recreational players to take a shot while also giving them enough play to justify a trip to Las Vegas. While many of the smaller buy-in events at the WSOP started offering 5x chips (when compared to their buy-in prices) this year, the Monster Stack starts players with 10x, i.e., 15,000 chips for a $1,500 tournament. 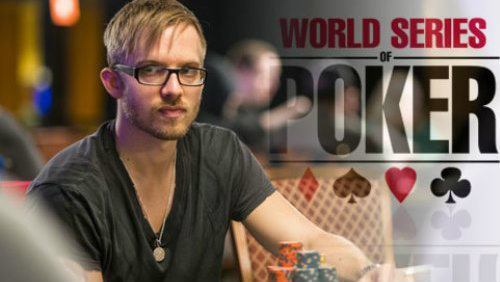 Day 1A saw 3,027 players enter the tournament, and at the end of play, it was Chi Truong who had bagged the most chips with 193,400. Joseph Cheong also finished the day with one of the biggest stacks, while Martin Jacobsen, Hoyt Corkins, and Vanessa Selbst will each have plenty of chips to work with heading into Sunday’s Day 2.

The $1,500 H.O.R.S.E. event was originally scheduled to end on Friday, but that seemed unlikely with 31 players left heading into the day. Sure enough, while the tournament managed to play down close to completion, there are still three contenders that will have to come back on Saturday to finish battling through the five-game mix.

With three players remaining, Robert Campbell holds the lead with over 2.6 million in chips, just ahead of Arash Ghaneian, who has more than 2.2 million. The most experienced of the three remaining players might be David Levi, who has 37 WSOP cashes, but he’s also the short stack with just 855,000 in chips heading into Saturday.

All three players are looking for their first WSOP bracelet, as well as the $239,750 top prize, while each has already clinched a prize of just over $100,000 by making the top three.

The $5,000 No Limit Hold’em Eight-Handed event played down to a final table on Friday. Bracelet winner Pierre Milan has the lead with just over 3 million in chips, but he’ll have to battle through a stacked final table to claim victory.

His closest competitors are a pair of Jonathans in Jaffe and Little, both of whom are looking to claim their first WSOP bracelets. So are Dan O’Brien and Anthony Zinno, each of whom are bringing about 1 million to the final table. Even short stack Dominik Nitsche is a three-time bracelet winner.

With so many dangerous players in the mix, this could be a fascinating final table to watch. The winner will walk away with $567,724, one of the bigger prizes awarded so far at the WSOP this year.

The $10,000 Seven Card Stud Championship also reached a final table, as eight players remain in contention for a bracelet and $239,518. Bracelet winner Brian Hastings is currently in the lead, as his 770,000 chips put him nearly 350,000 ahead of John Thrower in second position.

Unsurprisingly, there’s a lot of talent at this final table as well. Scott Clements, Max Pescatori, and Dan Kelly are all here and have all won multiple bracelets in their career, with Pescatori looking to win his second one this month.

There is just one other event in progress, and it has nearly reached its final table as well. The $1,000 Pot Limit Omaha tournament reduced its field down to 16 players on Friday, setting up a long day on Saturday that should end with a bracelet winner.

Right now, Aaron Wallace has the chip lead. However, his stack is far from dominating, and there are plenty of players well within striking distance of a gold bracelet and a $226,985 prize.

There are no bracelet winners in the remaining field, and several players still in contention have never even cashed in a WSOP event. That means we’ll have a first-time winner in what WSOP officials are calling the largest live non-Hold’em poker tournament in history.

There will be plenty to report on from the WSOP tomorrow, as four different events should produce winners sometime on Saturday. That includes the three events that are at their final tables,as well as the $1,000 Pot Limit Omaha event, which should have no problem playing through the final two tables in a single day. 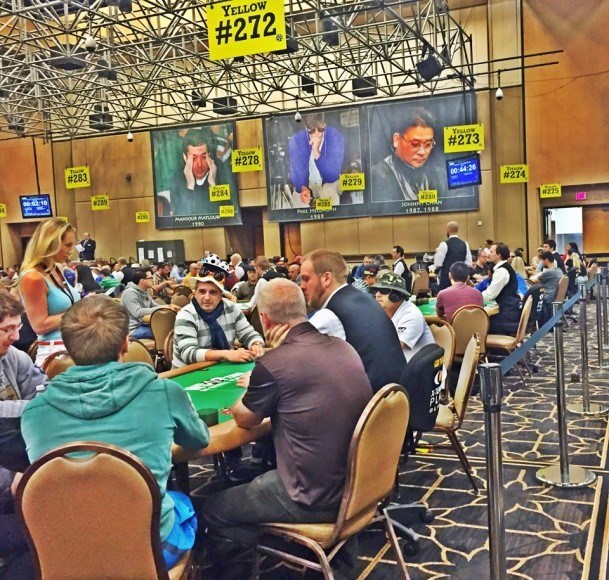 You never know what, or who, you’ll see at the tables at the Rio at WSOP 2015. Characters abound. (Image: CardsChat.com exclusive)

The Monster Stack will also continue with Day 1B. The numbers for this tournament appear to be slightly down from last year (perhaps because of the number of events surrounding it, or the addition of the Colossus as another low buy-in event), and it would take a truly monstrous second day (over 4,700 players) to beat last year’s field of 7,734.

One new event will also be kicking off on Saturday in the $10,000 No Limit Deuce-to-Seven Single Draw Championship.

This will be another small-field event, but make no mistake: you can expect everyone in the tournament to be well-acquainted with this game, in contrast to the $1,500-level No Limit Deuce-to-Seven event, which was won by a player, Christian Pham, who accidentally registered for it and had never played the game in his life before scooping the gold bracelet on Thursday.