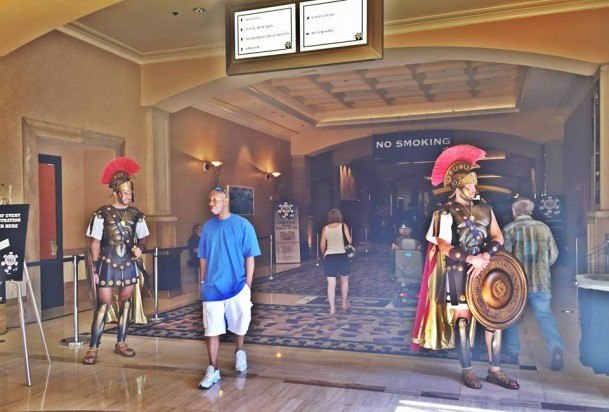 Players seemed somewhat nonchalant by the appearance of Roman centurions greeting them amid trumpeting on Day Three of the World Series of Poker. (Image: CardsChat.com exclusive)

It’s WSOP 2015 Day Three, and World Series of Poker management is already showing it knows what it’s doing when it comes to organizing the most massive event in Series history.

But before we take a look at Day One Flight A (and its cousins Flights B,C, and D) of Colossus, here’s the rundown on the first event bracelet of the season, in the Casino Employees event. 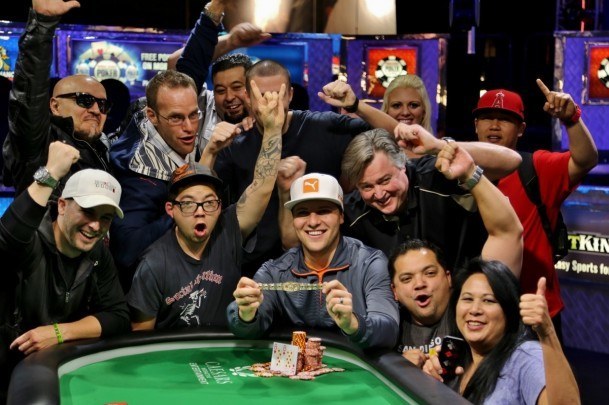 The Casino Employees event is designed to honor, well, the casino employees that make events like the WSOP possible.

Players come from across the country and around the world both to test their game against their fellow dealers, supervisors, and floor people, but also to get together with a great cross section of the industry they work in.

This year, the Casino Employees tournament attracted a big field of 688 players, each of whom put up $565 for the opportunity to call themselves a WSOP champion.

In the end, the victor was Brandon Barnette, who held the chip lead for most of the final table before losing it in heads up play to Greg Seiden and having to come back from the brink of defeat to win the bracelet.

Shootout Heads to Second Round

On Thursday, we saw the first change in format at the WSOP. Event #4 was a $3,000 No Limit Hold’em event, but it was also a Shootout, meaning that players had to win what was essentially a single-table sit and go in order to advance to the second round and make the money.

The shootout started with 308 players divided into 40 tables, and when the dust settled, there were plenty of big names left among those who qualified for the second round. Carlos Mortensen, Leo Wolpert, Joe Cada, Jason Somerville, Sam Stein, and actor James Woods were still alive in the hunt for a bracelet.

On Friday, now Day Three, the players will be split into 10 tables of four players each, with the winners moving on to the final table on Saturday. Everyone still in the tournament has clinched $6,180 in prize money; making the final table will guarantee at least $13,150, and the eventual winner will earn a $201,812 score.

The second day of the $5,000 No Limit Hold’em tournament saw the money bubble break and the field reduce itself to just 20 players. And though 95 percent of the players who started the event have already hit the rail, there are still plenty of notables in position to potentially grab their first bracelet of the summer.

Carl Westcott and Artur Koren are in a virtual tie for the chip lead, and are the only two players remaining who have surpassed the 1 million chip mark. But Greg Merson, David Sands, Bryn Kenney, Amir Lehavot and Joe Ebanks are among the others who are still alive in the event, with Merson and Sands sitting in 3rd and 4th chip position respectively.

Among those who cashed but were eliminated on Thursday were Brian Hastings and Andy Frankenberger. The eventual champion will win $466,120.

The WSOP isn’t just about Hold’em, of course, and Thursday also saw the first Omaha event of the series begin. The $1,500 Omaha Hi/Lo Eight or Better event drew the biggest field of the first four events, with 918 players coming out to test their four-card poker skills.

By the end of Day 1, just 358 players were remaining, meaning this event is far from the money bubble (only 117 will cash). But already, some of the best Omaha and mixed-game players in the world are making their mark on the tournament.

The chip leader at the start of Day Two was Tony Ma, the two-time WSOP bracelet winner originally from Vietnam. But Ma hasn’t won a bracelet since 2000, and both of his previous wins have come in Limit Hold’em events.

Others with very healthy stacks going into Day Two included Calvin Anderson, John Monnette, Jeff Shulman, Jeff Madsen, Allen Cunningham, Robert Mizrachi, Maria Ho, and Max Pescatori, all of whom (among even more notables) are in the top 25 of the chip counts after Day 1! Other names you might recognize with very healthy stacks included Dutch Boyd, Scott Clements, Jeff Lisandro, Allen Kessler, and Brian Rast.

Colossus Descends on the Rio

Friday marked the beginning of the biggest tournament in WSOP history: the $565 buy-in Colossus. There will be two starting flights on Friday, followed by two more on Saturday, with re-entry in later flights allowed for those who bust out of earlier starting times.

On Friday morning, the WSOP announced that the first three flights had sold out of starting seats, though late wave registration was still available. Seats at the opening level of Flight D were still available, though there were no specific numbers released.

Given the extremely high turnout for the Colossus, the WSOP also announced some logistical changes designed to deal with what could be well over 20,000 entries in the tournament. After seeing how the Casino Employees event played out (using the same structure as the Colossus), an extra level was added to each starting flight, meaning that the later flights (B and D) were pushed back an hour, and will now start at 7 pm local time.

It was already known that the tournament would start ten-handed in order to accommodate the field, and that it’s possible that the tournament could stretch into Wednesday if the action proceeds just a little slower than tournament organizers expect. It’s hard to imagine exactly how this tournament will go, but it seems certain that the Colossus will be unlike anything we’ve ever seen at the WSOP.

“It’s an amazing response by the poker community and shows the power and reach of the great game of poker,” Caesars Interactive Vice President of Corporate Communications Seth Palansky noted to CardsChat. In fact, it’s pretty clear that a lot of corporate thought went into both the demographic and logistics for this event; by just 45 minutes before start time of Flight A on Friday, the Rio hallways and registration lines were surprisingly calm and under control. 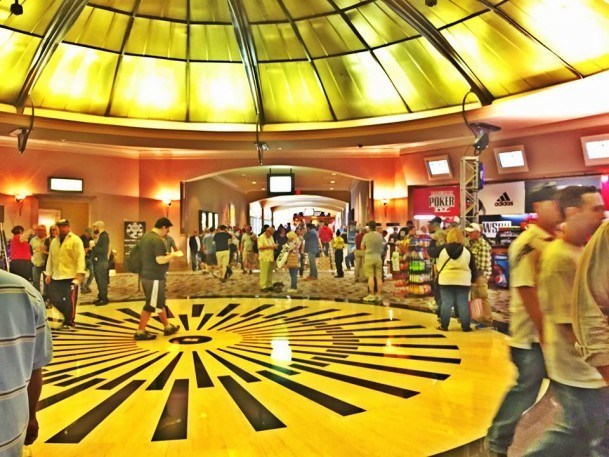 Colossus kicked off with a perhaps surprising level of calm on Day Three. (Image: CardsChat.com exclusive)

One Caesars management spokesperson we talked to said that was because many players had already picked up their tickets in the days before, noting that the pick up line had stretched far back into the Rio’s halls as of late last night, encompassing as many as 700 people at around midnight.

Of course, those players didn’t get greeted by Roman trumpeters and impressive-looking warriors in full-on Roman garb (ok, possibly their shields were actually plastic, but the effect was still cool).

And let’s not forget a few comely handmaidens who looked decidedly “I Dream of Jeannie”-esque in their presentation. Hey, it’s Vegas, that’s how things work here.

We also noted a marked lack of poker  celebrities this morning, perhaps bespeaking the possibility that the big names are mostly saving their joo joo for smaller and more elite fields that have a less lottery-like potential for suck outs.

You mean, besides the Colossus? Given how much room the tournament will take up, no other events will begin on Friday or Saturday. There are also no final tables scheduled to be played on Friday, meaning the Colossus will likely grab most of the player and media attention.