Winning Poker Strategy: Getting a Good Read on Yourself

Reading other players is a very useful skill. There are many books on the subject, and they focus on tells, betting patterns, styles of play, and the like. Mike Caro’s The Body Language of Poker/The Book of Tells is my bible in that regard. Joe Navarro and Zachary Ellwood have also written extensively and well on the subject. Learn what they teach and you will profit from it.

But here’s a question that is not asked or answered in any of their books. Who is the most important player in the game to get a good solid read on? 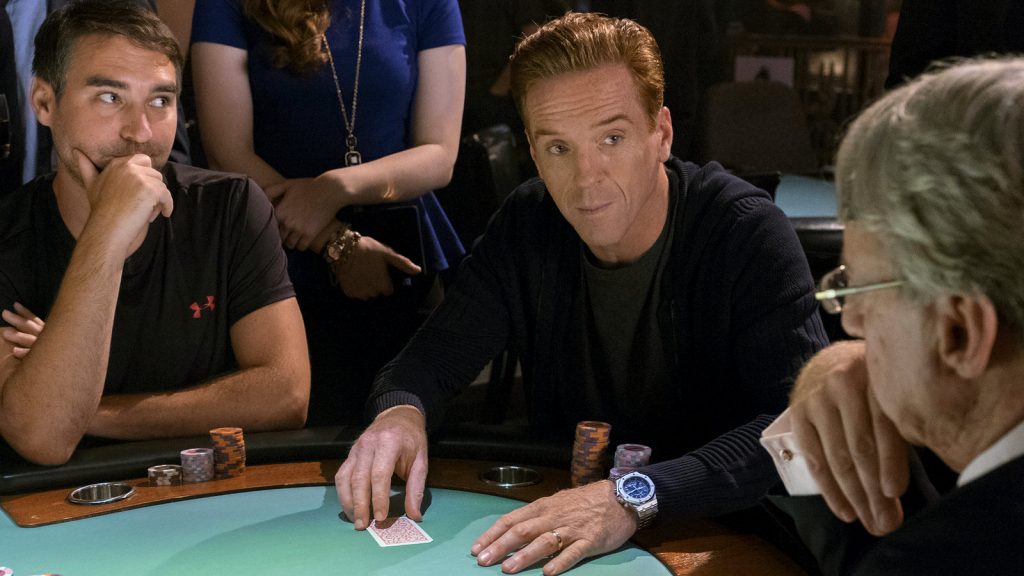 Who’s the player at your table that deserves your utmost attention? (Image: Billions)

These folks would suggest that the most important reads are on the most active opponents, as they’re the most likely to be in a hand when you are, regardless of where they sit.

Hold a mirror to yourself

Let’s start with the players on your immediate left and right. All things being equal, in a typical game, you’re likely to be in a contested hand with each of them less than 20% of the time you play a hand. While getting a good read on them will be useful, 80% or so of the time it won’t help you at all, since one of you will have folded preflop. Similarly, even the loosest player at the table isn’t going to be in the hand with you much more than 30 or 40% of the time.

But there’s one player who is in one hundred percent of the hands you’re in… you! That makes you the most important player to read.

Maybe you think you already have a good read on yourself, so you don’t have to focus on it much. You know your tendencies and style of play pretty damn well, so why worry about it?

Here’s the thing. That overall style of play of yours that you know so well may not be the image that your opponents see. And it’s precisely that image of you that you need to read.

We often mistake our true selves for our more important visible self. It’s easy to do. But, as you consider your appropriate betting action, the real you, the poker player you know yourself to be, is largely irrelevant.

You need to hold up a figurative mirror, and see yourself as others see you. That image will vary in every game. Every time you play, that’s whom you need to read.

Appearances can be misleading

Let’s say, for example, that you’re a highly skilled versatile player who tends to be loose and aggressive. Now imagine that you’ve just sat down at a $2/$5 table and have been dealt a ridiculous number of truly awful hands: 7-2, 8-4, 6-3, J-5, 9-2, etc. Just awful. Imagine two hours of that crap.

Now, ask yourself what you appear to be? For all but the very few players who’ve known you for a long time, and who keep track of what they have observed, you are a complete nit – a rock. For all intents and purposes at this table, that’s what you are.

It doesn’t matter that the image that you have presented since you sat down doesn’t reflect the kind of player you really are. What matters is only how you appear. Once you understand that image, you can take advantage of it and vary your play accordingly.

Let’s say you’re a relatively conservative, tight and aggressive player. In the last two hours, you’ve been hit by the deck and have entered nearly every pot, often for a raise. And let’s say the flop and the turn have been kind to you – and you’ve capitalized on them with more aggressive betting and raising. The hands are almost always conceded before the river, as your opponents have tended to shy away from the stack-sized river bets that you’ve been making every few hands. In a phrase, you’ve been running over the table.

After two hours of this, you find yourself sitting on the button with AA. A few players have called the big blind. The action is to you. What do you do?

On the one hand, you know yourself to be a tight-aggressive player. You’re concerned that if you make a big raise everyone else will fold and you’ll win nothing but the blinds and the few calls. You’d like to have at least one person play back at you so you could truly take advantage of your pocket rockets. You’re tempted to flat or make a minimum raise.

If you have a good read on yourself, you’ll recognize that though you know yourself to be a tight-aggressive player, your image is that of a maniacal player – as your recent betting action makes you appear to be betting and raising with abandon. Your best play, given your likely image in the minds of your opponents, would probably be to raise – and to raise by a lot, as you’d expect your opponents to see it as just more aggression from a wild opponent, and not respect that it means you must have a very strong hand. As such, they would be more likely to call that raise or even 3-bet you.

Reading your image at the table will surely help you profit, but that’s not sufficient. To truly optimize your play, you also need to have a good read on your emotional and psychological self.

It’s easy to become so immersed in a game that you fail to see how you’re reacting to the many stimuli you face. You metaphorically get stuck in your chair, unable to step back and examine how you’re doing. You lose any self-perspective, sliding into a semi-conscious and habitual mode of play.

Instead, you need to periodically step back and look at yourself. I’ve found it helps to literally get up from the table for at least a few minutes to ask myself a few questions. How am I feeling? Tired? Bored? Thinking of leaving? Angry? Crazed? Unfocused? Steady? Do I have a good handle on my play? Am I playing my best game?

If I conclude that I’m still playing well, I return with a renewed commitment. If I’m starting to feel tired, distracted, anxious, or ready to leave, I pick up my chips and go.

Yes, it surely helps to get a read on other players. Categorize them, figure out their betting proclivities, and learn their tells. But don’t get so caught up in reading them that you lose track of the most important subject of your review – yourself and your image in the minds of your opponents.