Flashback Friday: The Birth of ‘Nine-High Like a Boss’

Four years ago, William Kassouf, intentionally or otherwise, invented the now-famous poker phrase, “nine-high like a boss.” The “speech play” specialist busted out the phrase following a memorable, albeit controversial, bluff at the 2016 World Series of Poker. 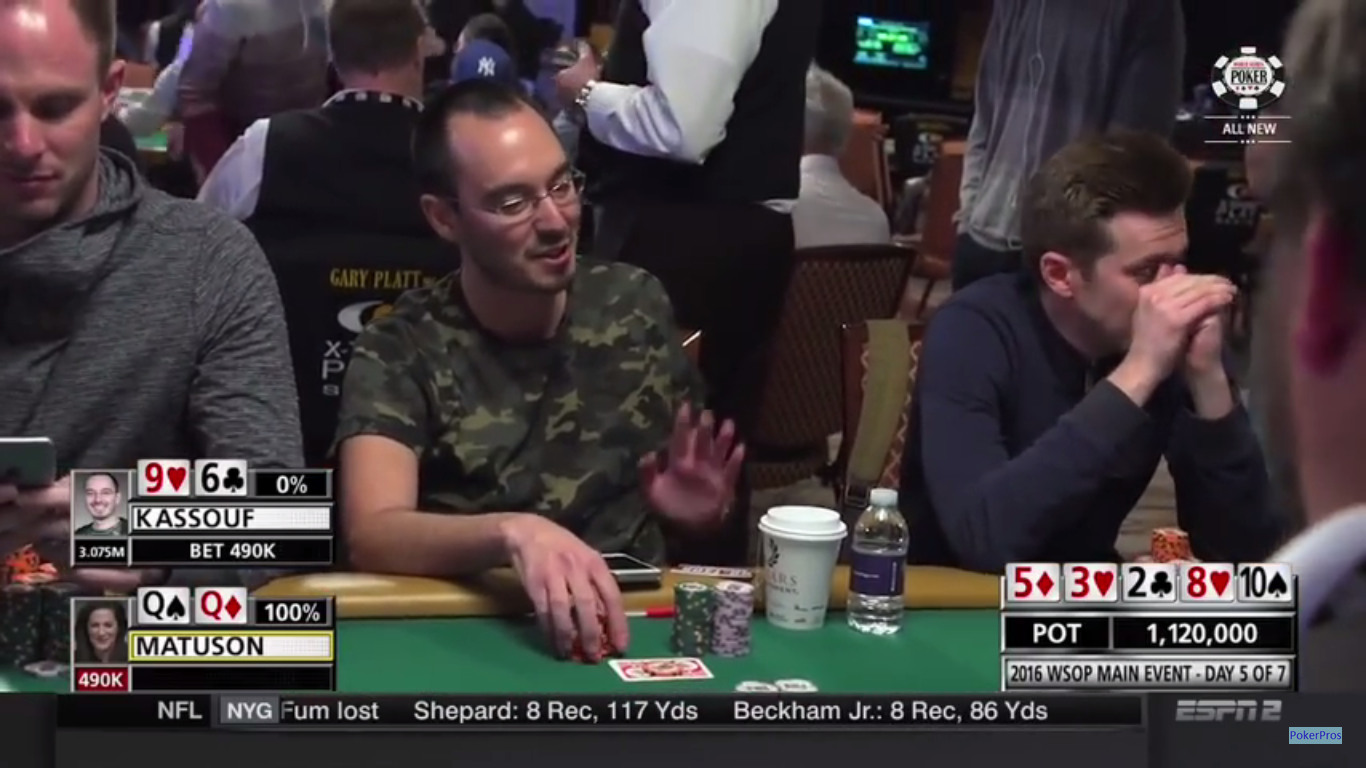 Kassouf was an unknown player heading into the WSOP four years ago. But he became a familiar face immediately after ESPN televised the series in the fall. That’s because of his actions at the table, which some enjoyed and others despised.

The British poker pro often uses speech play as a means for getting his opponents to do what he wants them to do. In a memorable hand against Stacy Matuson during the 2016 WSOP, he used his speech play to his advantage — she folded pocket queens to his nine-high. But his behavior during the hand drew criticism from many viewers and ESPN commentators Norman Chad and Lon McEachern, and also got him in some hot water with tournament director Jack Effel.

Kassouf Talks His Opponent into a Fold

With the board reading a rainbow 5-3-2-8-10, Kassouf had nothing but nine-high following a missed straight draw with 9-6. More than 600,000 chips were in the pot at the time, so by checking and surrendering the hand, he stood to lose out on collecting a massive pot.

Instead of checking it back, he opted to fire out 490,000 chips and put his opponent to the test. Matuson, holding pocket queens, had a tough decision. Sure, she had an over-pair and knew Kassouf is prone to bluffing. But, if she called and was wrong, she would have lost her entire stack. With millions of dollars up for grabs in the Main Event, she had to stop and think for quite some time. That’s when the speech play began.

Today is exactly 4 years since WSOP Main 2016 Day 5 when “9 high like a boss” was born. To this day and even online I see players trying to bluff me & others with 9 high which is great for the game! It won’t end! Weee! Lol#9highlikeaboss
🤑😂9️⃣⬆️💪💰🎉☝️https://t.co/ZOq1h4ShEX

“There’s over 600k in there, so I want you to call,” Kassouf said as Matuson pondered her move.

Matuson then complained to the dealer that her opponent is “breaking all these rules and they’re not giving you any penalty for it.”

“The decision is on you, young lady, and you don’t need to go on about it,” Kassouf fired back. “I want you to call. Good luck to you. I did say I’d show, it’s a friendly table. So, I’ll keep it friendly. If you fold, I’ll show. But I want you to call, 100%. There’s a camera crew now. This will be embarrassing. I cannot say what I have, but you don’t put me on this hand.”

Kassouf continued his speech play for a couple of minutes. WSOP officials then huddled around the table to pay close attention to the Brit’s behavior and keep things under control. Effel then stood behind Mr. Speech Play to scold him on his behavior. The tournament director threatened a penalty.

After a few minutes in the tank, another player at the table called the clock on Matuson. She would eventually release her hand face-up, showing the pocket queens. Kassouf smiled, flipped over his hand, and shouted, “nine-high like a boss.” A popular poker phrase was born.

Karma, In the End

Kassouf ran deep in the 2016 WSOP Main Event, but fell victim to what some may see as karma on his final hand. Griffin Benger, with pocket aces and 17 players remaining, opened to 875,000. Mr. Nine-High Like a Boss, in late position, tanked as he often does before three-betting 2.3 million with pocket kings.

Kassouf went into his usual speech play, which didn’t irritate his opponent, who had him in a world of hurt. Benger, trying to avoid the constant rambling of his opponent, fired back a four-bet to 5.6 million. Kassouf continued badgering his opponent.

“You’re just an abusive person, man,” a frustrated Benger uttered. “It’s not funny, it’s not a game. You’re being abusive to me.”

“It’s not called speech play, it’s called being a bad person,” Benger said before firing off his own catch-phrase: “Check your privilege.”

Benger snap-called and then proudly busted his opponent when the board ran out 8-3-10-6-10. Kassouf’s dreams of being a world champion were dashed, but he still went home with $555,619 for 17th place.

I expected Kassouf to call the clock , but instead another”guy” called it ,although he knew how difficult this decision was for the woman player . Anyway , 9 high like a boss , he did prevailed in a way to be remembered 🙂
But , in the end carma stroke back , lol . I believe the player with the AA played a little theatre , the victim , so as to make Kassuf go for it , and Kassuf went for it , lol , funny moment , but not so funny as thw 9high like a boss moment , lol 🙂
Pitty for this woman , she should have chosen the aggressive way and call on that hand , against Kassuf .