Will Kassouf finished 17th in the 2016 WSOP Main Event for a $338,288 cash, but he’s getting so much attention you might think he won the tournament. Even major media outlets such as Fox Sports are joining in on the Kassouf hysteria. 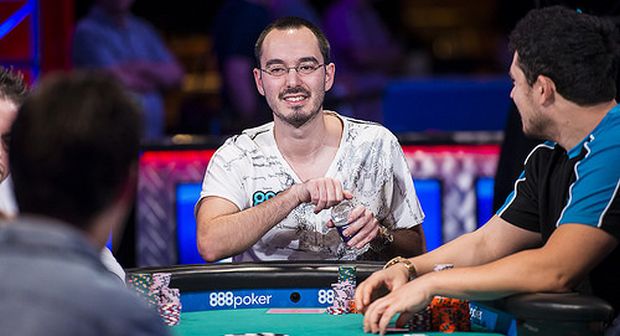 Will Kassouf has received national attention for his behavior during the Main Event, and has both detractors and . . . lesser detractors.  (Image: WSOP)

The British lawyer has been the center of attention during ESPN’s Main Event coverage airing. He uses what he calls “speech play” to gain information from his opponents, and took more time to act both before and after the flop than others at his table.

This type of behavior led to harsh criticism from his opponents and ESPN commentator Norman Chad. In his final hand, Kassouf picked up pocket kings against eventual November Niner Griffin Benger’s pocket aces. The story isn’t a sick cooler sending a player to the rails late in the Main Event.

The two players got into a heated argument over Kassouf’s tanking and what Benger called “abusive behavior” during the hand. In most cases, when pocket kings and aces are dealt to players in the same hand, all the money is in the pot quickly. But it took minutes before Kassouf finally shipped it all-in.

This memorable hand has caught the attention of media outlets that don’t typically cover poker on a regular basis. The Huffington Post even picked up the story, using the headline “Here’s Why You Don’t Bully a Poker Pro With 27.8 Million Chips in the Pot.”

Nick Schwartz, a writer for FoxSports.com, also wrote about Kassouf’s encounter with Benger. To give it some background, Schwartz included a story of another tournament in which Kassouf was verbally threatened by another unnamed opponent who was equally annoyed at the Brit’s nonstop needling.

Kassouf is getting more attention than any non-final table finisher has since Tiffany Michelle was the last woman standing in 2008 . Tom Marchese, one of the top pros in the world, was barely mentioned during ESPN’s Main Event coverage because Kassouf’s controversial antics were so pervasive. Even ESPN’s Norman Chad had enough of his behavior.

Daniel Negreanu, on the other hand, has been critical of those who are critical of Kassouf’s behavior. But he did concede one thing.

“There is no question @WilliamKassouf behavior was disruptive and disrespectful with the tanking. THAT [the tanking], and solely that should be the focus,” the poker legend posted on Twitter.

Kid Poker has defended Kassouf’s speech play tactics, but many others are less bountiful in their understanding. The one thing that nearly everyone can agree on, however, is that Will Kassouf’s tanking, in which he sat for many seconds without taking any action whatsoever, is bad for the game. Chad told CardsChat that ESPN cameras was forced to cut out portions of his hands, where before even looking at his hole cards, he took as long as 10 seconds, which in TV air time is about a month.

well I watched a bit of the tournament, I feel like he was more annoying than actually getting under peoples skin. it becomes enough at a point.

A person has a right to free speech, a player paid his money, Will was refreshing to the game, his tilting speech is his right and he owned it. His persona at the table was to further his small edge against a diverse field of ego’s. Psychology is a beautiful weapon, one that my game is also working on as well in my own way. His slow time to act was tilting the table, and then speaking for an extended period of time was done consistently that goes beyond the cards. However, the speech that was used was nothing personal, and the words had no malice behind them rather Will was just extremely obnoxious.

Online, I have witnessed way worse statements made in hate towards other players. However, he should have laid those Kings down pre because with that line of play this player was recognizing they were going to trap him because of his image and my game knows this from experience. My approach would have been to engage him consistently with the same tactics to find out how much he could take because Will is used to being called a clown and those statements allows for Will to know his speech is working because he is used to ego’s reacting that way.

It would have been more refreshing if any of those players would have attempted to use the same tactics back at him with no emotion, just a better brand of psychology that might have slowed that speech down. Anytime the referees get involved to talk to Will, Will is winning and the WSOP is losing. Congrats Will.

You are talking absolute rubbish. He was the definition of ‘DICK’ and his stalling was beyond awful