The Westgate Las Vegas will soon have a poker room again. The hotel and casino best known for its sportsbook will open an intimate six-table room on Wednesday, in a space occupied by the former sportsbook “fan cave.” 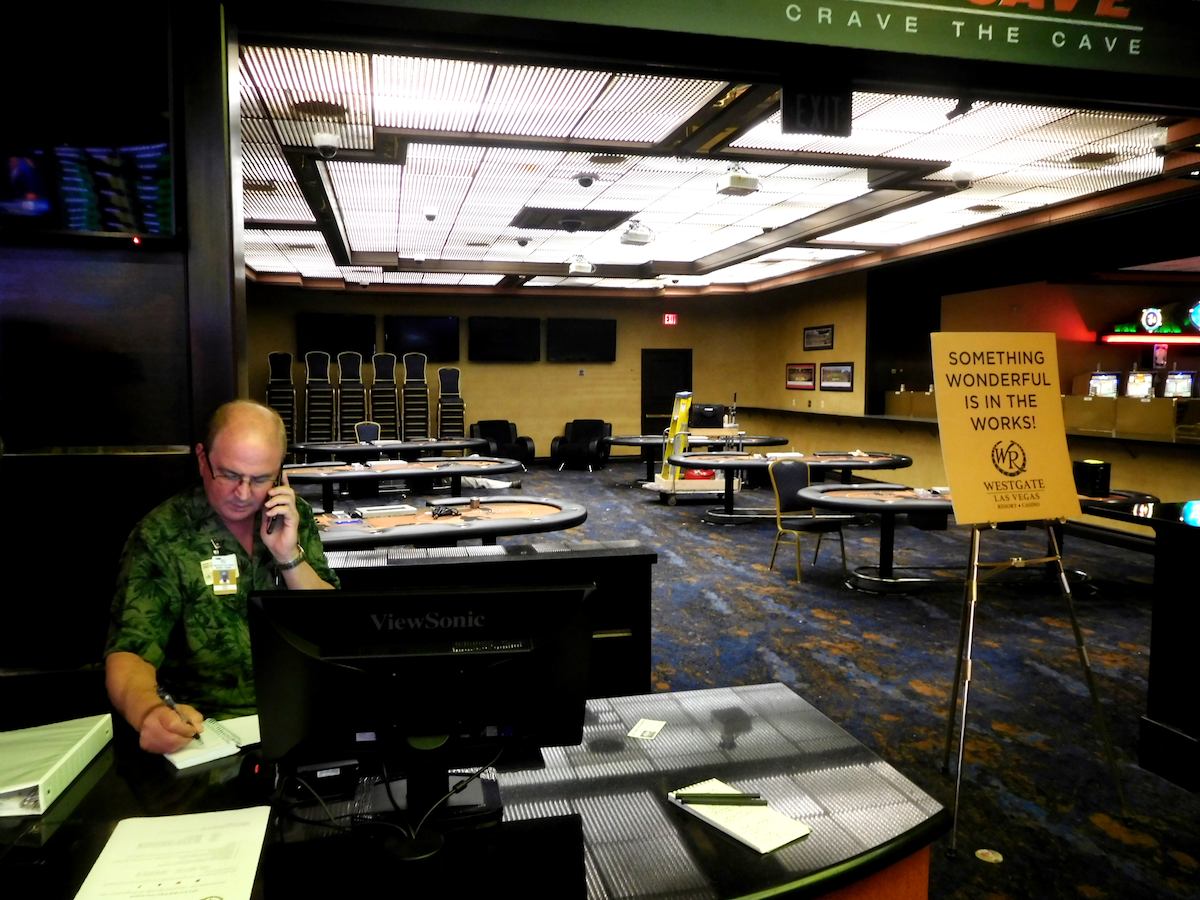 David Fried, poker room supervisor at the Westgate Las Vegas, is putting the finishing touches on the new poker room, which is reopening Wednesday after a two-year closure. (Image: CardsChat)

The Westgate most recently closed their poker room in June 2015, just a week after Paragon Gaming took over casino operations at the Westgate. The hotel itself has changed hands several times over the years, and with it the poker room room has opened and closed multiple times.

According to Poker Room Supervisor David Fried, the possibility of bringing poker back to the Westgate had always been possible, but interest in the most current transformation only recently made it real.

Fried said the room will mimic the former fan cave and will be hopping just in time for the NFL season.

“We have the three large projection TVs on one wall and four large flat screens on the other,” Fried told CardsChat.com. “I want to get some more TVs on the other side as well. It will be perfect for football season.”

The proximity of the room, which is located right behind the sportsbook, is also next to a deli, but Fried said table-side dining should be available shortly after the opening.

“It will be word of mouth at first,” Fried said of the re-opening. “But I think people will find out pretty quickly about us.”

Workers were putting finishing touches on the area on Monday as Fried was shoring up details about games the room will spread. Right now $1-2 no-limit, and $2-4 and $3-6 limit Texas hold’em will be offered, with pot-limit Omaha also an option.

“We wanted to have lots of incentives for players,” Fried said while thinking about high-hand jackpots and other player incentives. “We’ll start giving away buffets or restaurants credits starting at three hours of play.”

The Westgate also intends to hold a private tournament next week, an invitational for people in town for the American Poolplayers Association World Championship.

As an off-Strip venue, the Westgate has seen multiple poker rooms come and go. The property was still the Las Vegas Hilton when it opened a poker room in the 1990s, only to see it shuttered in the early 2000s, just before the poker boom hit.

The hotel opened a new poker room in 2005, but closed that room in 2007, at a time when new rooms were still opening up at casinos in Las Vegas and across the world.

Under new management and calling itself the LVH, the hotel would try its hand at poker again in 2013, only to see interest wane and the doors close in 2015, this time under the Westgate banner.

Thanks John Reger for a wonderful review.