“Western Religion” Indie Poker Film Could Turn You Into an Atheist 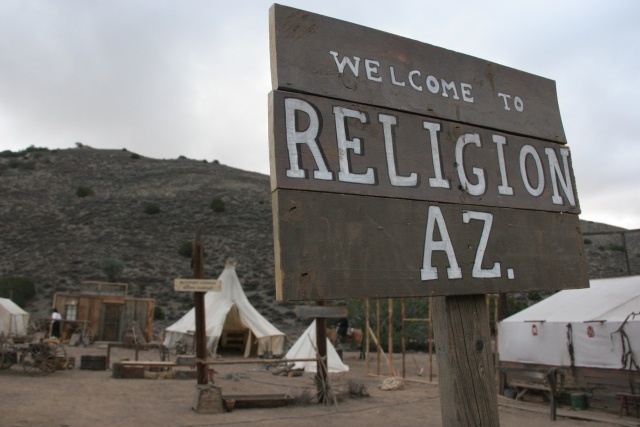 Western Religion, a poker-themed movie recently released at the San Diego Film Festival, may drive you to throw some cards at the screen.  (Image: la.lifediverse.com)

Western Religion, a new indie poker film about life and times in the Wild West, was recently released at the San Diego Film Festival. This flick is about a group of gunfighters that descend upon the town of Religion, Arizona in 1879 to compete in a “legendary” poker tournament.

If you are looking for a movie with big name actors, or even a C-lister or two, you should probably find something else. The cast includes the likes of Peter Shinkoda, Vivian Lamolli, Miles Szanto, and Marik Tadros. If those names don’t sound familiar, you’re not alone.

Western Religion was intended to be released in 2014 but, due to a lack of funding (and probably interest), the dozens (?) of poker fans excited to see it were forced to wait a year. Oh, the horror.

Based on its ridiculously long trailer (2:45), the film has a confusing plot, a Johnny Depp-wannabe actor, and cheesy Old West stereotypes.

Western Religion appears to be the 2015 version of Rounders, except completely different. Rounders, of course, was a legendary poker movie with a star-studded cast. Western Religion is, well, none of the above.

I watched the trailer and, quite honestly, am confused as to the plot. That’s the first sign of why this movie isn’t worth seeing. The plot appears to be about a group of stereotypical Old West gunslingers that compete in a poker tournament, with the winner being granted a shiny gold cross.

Along the way, fights break out and all sorts of uninteresting adult drama ensues. Oh, and plenty of bad acting. That’s about all I could gather from the trailer. But don’t take my word for it: watch it for yourself below.

James O’Brien (Wish You Were Here, Venice Bound) wrote and directed Western Religion. He created a crowdfunding page on Indiegogo in hopes of generating $100,000 to fund his movie. He came up well short, raising a whopping $16,380.

Where the money came from is unknown, although I would guess most donors were friends and family members. I’m not sure who else would want to contribute to such a cheesy movie.

On its Indiegogo crowdfunding page, the filmmakers offered up some interesting incentives to those making a donation, including:

Since they were obviously desperate for cash, had I known about this movie prior to filming, I probably would have given them a crisp $20 bill to get my name in the credits. My esteemed editor said she would have offered up $20 just to keep her name off the credits.

On a serious note, I’m sure the folks that put this movie together worked extremely hard. I just don’t know why they thought poker and/or movie fans would find it entertaining. Western Religion makes Gigli and Showgirls seem like The Godfather.

Apparently no one on this set knew when to walk away, or, in this case, run.

Stop right there buddy! Take this movie for what it is, A low budget movie with unknown actors. This being understood, After watching the trailer my first thought is Wow this could be a fun movie to watch. Why do you think so many B movies become cult classics? As bad as they are they can still be fun even when they weren’t intended to be. Loosen up and give the newbies a chance. I would at least watch the whole movie before giving it such a terrible review. Of course I would probably watch it stoned. I wonder if there’s any work out there for a 65 year old stoner movie critic. I got the time if you got the movie’s man.

The Writer (I use this teem loosely) of this “review” and I use this term even more loosely, should stick to poker. Saw this film in Cannes and it was great. Who cares about the crowdfuding details? Total fail of a review of a very entertaining flic.