This past weekend, the Nuts Poker League, a pub poker league in the UK, held their England/Wales National Finals at Grosvenor Casino in Coventry. It took more than 11 hours for the 213-player field to play down to a winner, and that man was Wrexham’s Dafydd Joseph. 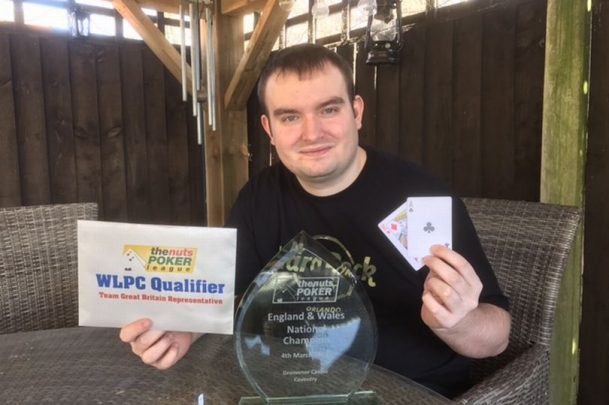 After qualifying via a pub poker league, Dafydd Joseph will represent the UK in the World League Poker Championships in Las Vegas. (Image: Daily Post)

The 23-year-old worker at Marks and Spencer, a major British retailer, not only won £2,500 ($3,065) after a heads-up chop with Jamie Ellison, but also a seat into November’s Third Annual World League Poker Championships in Las Vegas.

From Pub Poker to Sin City

The Nuts Poker League was established by entrepreneur Steve Bellis, and quickly transformed recreational poker across the county as thousands of players competed in the league. It bills itself as “The Biggest Brand in Pub Poker,” and it certainly attracts the numbers to back it up. That’s not much of a surprise, as it was recently revealed in a study that half of the UK population enjoys gambling.

For Joseph, his journey began at Elihu Yale bar in Wrexham, a town located in northeast Wales with a population of approximately 135,000. It was there players competed in poker tournaments for points with the top 25 percent qualifying for a National Final Qualifier to compete for cash and prizes.

According to the league’s website, Joseph finished eighth on his local pub’s leaderboard with 1,854 points. To put that in perspective, the player at the top of the list was Graham Austin with 3,200 points. Meanwhile, Kain Davies was the last player to qualify with 1,350 points.

In the last hand of the England/Wales National Finals, Joseph looked down at Big Slick and called after Ellison moved all in with queen-eight. An ace hit the flop to give Joseph a big lead, but there’s always a sweat and an eight on the turn kept Ellison drawing live. Fortunately for Joseph, who has been playing poker recreationally for five years, a king on the river gave him two pair and the win.

“It was a great feeling . . .,” Joseph told the Daily Post after the win. “[Vegas is] going to be a great experience, I’m really looking forward to it.”

League of Their Own

The World League Poker Championships (WLPC) in Las Vegas, which will be held at The Orleans, will see Joseph, as well as Scotland National Final champ Alexander Wood, take on representatives from Canada and the United States for cash, which last year was a $25,000 guaranteed prize pool.

Essentially, the WLPC connects pub poker leagues from around the world by offering them the opportunity to compete in a championship festival, one that spans five days and offers cash games, tournaments, and parties throughout. It’s also the place where several leagues hold their championship events, such as the West Coast Poker League and Snowman Poker League.

The eventual winner of the WLPC Main Event is not only awarded $5,000, but gets the bragging rights associated with being dubbed the WLPC World Champion. Past winners include William McGrotty and Jacob Miller.

Will Joseph be next?