Weak-Passive Poker: Why Calling So Often Can Be Your Biggest Leak
June 12, 2020 Poker Strategy

Weak-Passive Poker: Why Calling So Often Can Be Your Biggest Leak

When I reviewed the CardsChat Winning Poker Player in 30 Days course by Collin Moshman and Katie Dozier—a married pair of top-tier sit-n-go experts with millions of dollars in cashes—there was one lesson that really changed the way I think about poker. 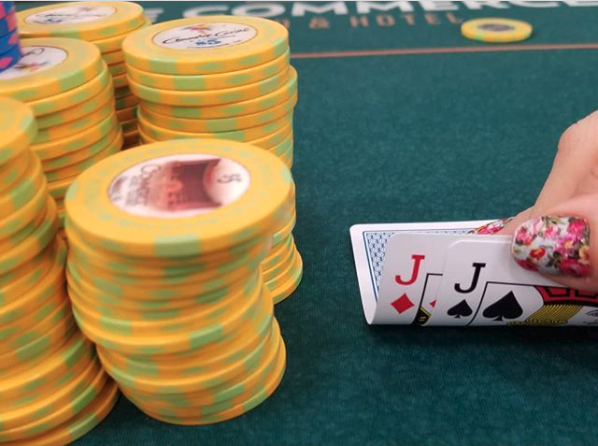 The propensity to call and see a flop first not only makes your hand vulnerable, but also it limits your moves on later streets. (Image: Instagram)

The duo breaks down gameplay moves into three categories: passive, aggressive, and neutral. Can you guess which maneuvers fall under each? Their answers may surprise you.

Aggressive moves were the most obvious: betting and raising. No brainer.

What about checking? You may find it interesting that checking is labeled as neutral. Folding? Also, neutral.

So, what is the most passive action in poker? Calling.

Calling is letting others dictate the amount of money/chips in the pot and doesn’t allow you to take control. You’re responding to others rather than forcing others to respond to you.

Here’s a typical example of calling-gone-wrong in a live game, and why it is poor poker.

This is obviously a great flop for James. He has a flush draw, a straight draw (any four will make him a wheel with A2345), and Heather hitting either her ace or jack will also put him in the lead. Even without a pair, he’s a statistical favorite, expected to win 62% of the time.

James would have most likely won with the same hand and the same cards if he only played the game more aggressively. This is how you play the game rather than your cards. It’s practicing good poker.

Calling is the antithesis of what makes winning players. Direction. Control. Maneuverability. Allowing others to take the lead and decide the size of the pot is like trying to be a backseat driver. It doesn’t work.

There are, of course, times when checking is appropriate and impartial—say, checking to see if the person who raised preflop c-bets. There’s also nothing wrong with folding. It’s often the most profitable move in poker. No one should kick themselves for letting their cards go.

Folding takes great discipline and is often the sign of a seasoned player.

Checking can, alternatively, be used as a tactic to trap. People mistakenly read checking as always weak, so every once in a while, it makes sense to check with a very good hand for deception. There are too many situational circumstances to always move checking into the “passive” category.

The main takeaway is to avoid calling too much. You want to be the one betting and raising as much as possible when you have good hands and, when you have bad hands, you mostly just want to fold and move onto the next.

In short, you should play very few pots, but play them very aggressively.

Viewing folding as neutral and calling as passive will hopefully change the way you think about the game, and lead you to act accordingly aggressively. It certainly inspired me.