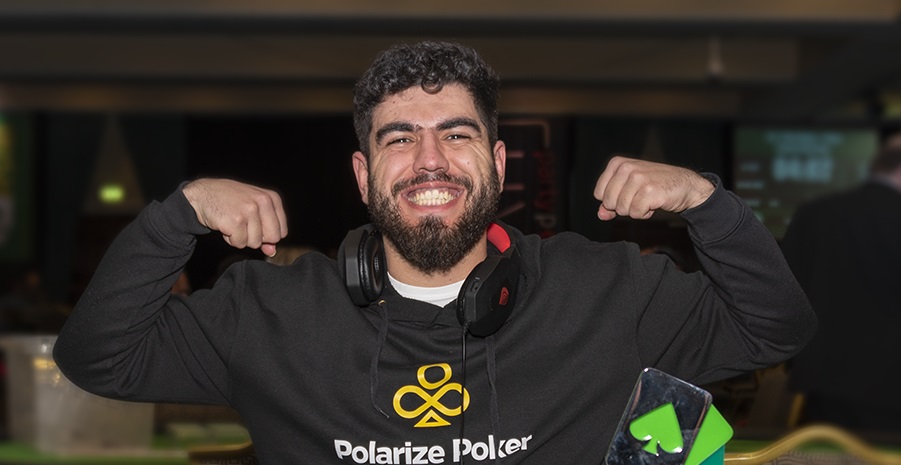 Marques Gets Lucky When It Counts

When the final day of action started on Thursday, Teun Mulder led the High Main Event, but it wasn’t long before Marques took control. A fortunate turn card allowed him to eliminate the short-stacked Cecilia Cafaro in ninth place.

Cafaro committed her stack with A♥ K♦ and Marques called with A♦ 3♠. The 2♣ 5♦ 10♠ flop gave Marques some additional outs with a four, and that’s exactly what happened appeared the turn. The 4♦ put Marques into the lead with a straight before the 8♠ sent Cafaro to the rail.

That hand opened the elimination floodgates and set Marques on a course for the title. With chips in hand, the man known online as PTFisherman23 sat tight as Mulder, Robin Ylitalo, and Tonio Röder put in some work.

When the table became four-handed, there were talks of a deal, but no one could agree on terms. 2013 WPT London champion Ylitalo was next to fall, leaving the final three to run the numbers again.

This time, everyone was happy to lock up just over $1 million each. That left $100,000 to play for and, of course, a WCOOP Main Event title.

When play resumed, Marques pushed the pace. First, he eliminated Mulder, then he took out Röder with a straight on the river (see video above).

With that, the WCOOP (High) Main Event was over and all eyes turned toward the Medium and Low editions of the finale. Unlike the High Main Event, there were no deals to be done in these MTTs.

WCOOP Creates Champions at Every Level

1mSoWeeeaK led the Medium Main Event final table, but slipped to second when Y.Zakharov took out three players in quick succession. By the time just those two were left, 1mSoWeeeaK regained control.

The final hand saw a healthy dose of luck give Thailand’s 1mSoWeeeaK the title. Moving all-in with 9♣ 8♣, 1mSoWeeeaK needed help when Y.Zakharov called with A♦ 9♠.

Help promptly arrived in the form of an 8♠ 3♦ K♣ flop. The 2♥ and 2♠ on the turn and river didn’t help Y.Zakharov and, with that, another WCOOP champion was crowned.

Rounding out the day’s winners was klimono. The Polish player dominated the action and never even considered a deal on route to winning the title. In the end, A♥ 8♥ was enough to beat Tangawi26’s Q♥ 9♦ in a final all-in showdown.

PokerStars’ 2020 WCOOP may not have surpassed last year’s event in terms of prize money, but with three new Main Event champions and $99.9 million paid out in recent weeks, the series will go down as another success.