A major Twitch leak has exposed how much its content creators have earned through subscriptions and donations since August 2019. Among those caught up in the data leak are some of poker’s biggest streamers, including Lex Veldhuis, Ben Spragg, and Arlie Shaban. 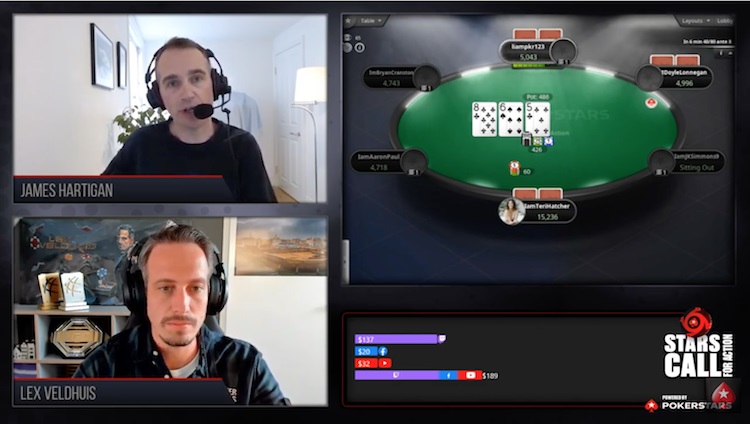 While the top overall channel had made more than $9 million since August 2019, the top poker streamer and PokerStars ambassador “LexVeldhuis” cleared $294,000, according to twitchpayouts.com, which collated the leaked information into a searchable database.

Dutch poker player Lex Veldhuis built his 285,000+ fanbase by streaming himself playing on PokerStars, but the Dutch government just threw a monkey wrench into Veldhuis’s life by ordering PokerStars and other gambling sites to stop operating there.

Lex Veldhuis Among the Pros Whose Earnings Were Exposed

PokerStars left Sept. 30, with hopes of returning to the market in 2022 after the government passes gambling regulations. That will hurt Veldhuis in the short-term until he finds a way to relocate while PokerStars finds its way back in the Dutch market.

Great timing for the Twitch-code leak honestly. If anyone hacked my stream key and password, do me a favor and stream something on my channel while I sort out my stuff! #roadtotop100ofthelist

Other streamers, like Scott Heller, who runs “tehMorag” channel, confirmed to ABC news in Australia that the figures, at least in their cases, were accurate.  He also confirmed it on Twitter.

Like Veldhuis, sponsored pros are the among the most popular poker streamers on Twitch. Naturally, they pale in comparison to video gaming channels such as CriticalRole which has 826,000 followers and generated $9.6 million since August 2019.

Nonetheless, some of poker’s top streamers have still be cashing in on their Twitch antics over the last couple of years. They might not have eclipsed their earnings at the tables, but they’ve certainly enjoyed a healthy bankroll boost, according to the data leak.

As per the Twitch data leak, these eight poker pros have all been riding the streaming wave in recent years:

Spraggy is a member of Team PokerStars and his 128,000 followers have helped him earn $128,000 since August of 2019. The Brit can often be seen playing high buy-in tournaments with upwards of 1,000 viewers at any one time.

Hand’s Twitch handle is easywithaces and he currently has more than 115,000 followers.  who sent over more than $89,000 his way. The Irish pro is also a member of Team PokerStars and can be found grinding MTTs on a daily basis. As per the Twitch data leak, he’s earned $89,000 since 2019.

Canadian Staples celebrated going over the 100,000 subscriber mark on October 6. It took him six years, but the Partypoker pro’s tournament streams have earned him $84,000 since August 2019.

Schneiders is a poker coach who streams from Germany under the alias xfllixx. A member of Team PokerStars, he makes instructional videos for his sponsor as well as his own training site. This confidence in front of a camera has helped Schneiders attract 64,000 flowers and earn $87,000 since summer 2019.

Another GGPoker team member, New Zealand’s Pavlovic is better known as ALLinPav, His 85,000 followers get to see him play $200,000 worth of poker each month. Based on that, his $42,000 Twitch earnings are a mere drop in the ocean.

American Jeff Gross is a Partypoker ambassador with 84,000 Twitch followers. He’s not as prolific as some of his peers when it comes to streaming due to other commitments such as his podcast. However, despite that, he’s still earned $40,000 since 2019.

Canadian Arlie Shaban is a PokerStars ambassador who’s been on Twitch since 2017. His 48,000 followers watch him crack jokes as he plays mid-stakes tournaments on a weekly basis. He’s charismatic streams have earned him $35,000 since August 2019.