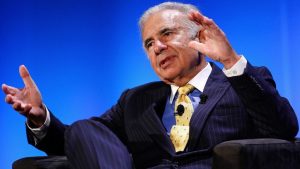 Atlantic City’s second-largest poker room could be set to reopen its doors after Carl Icahn purchased the Trump Taj Mahal, which will retain its name as part of the deal. But Icahn says it’s all contingent on no North Jersey casinos. (Image: socialnewsdaily.com)

But the opera may not quite be over, as a furious Icahn told the Associated Press on Wednesday the purchase will only go through if the Garden State drops its push to offer two North Jersey casino licenses.

The issue of North Jersey casino has been a hotly contested one on both sides of the fence in the past few weeks. And having just nabbed the Taj out of bankruptcy on Friday, Icahn says his planned $100 million investment won’t happen if North Jersey is given the green light for brick-and-mortar gaming.

Although Trump’s direct ownership of the casino has been over since 2009, the Trump Entertainment Resorts property was allowed to continue using his name after giving the presidential hopeful a 10 percent stake in the venue.

But after continued losses and a general decline in the casino economy in Atlantic City, the Trump Taj Mahal filed for Chapter 11 bankruptcy on September 10, 2014, with a plan to close the doors on November 12, 2014.

Following a round of legal battles with the casino’s employees and their representative union Unite Here Local 54, the closure date was pushed back and dropped completely after Icahn pledged $20 million to cover its running costs.

Fast-forward just over a year and Icahn is now the official owner of the casino and it’s no longer filed under Chapter 11. Trump also doesn’t own 10 percent of the venue anymore, but his name will remain on the property.

In commenting on his latest acquisition, Icahn called the Trump Taj Mahal a “signature” property in Atlantic City and somewhere that has the potential to continue Atlantic City’s revival.

“Although both Atlantic City and the Taj have had a few tough years, today marks the beginning of the turnaround. I am confident we can and will do the same for the Taj,” Icahn noted.

But that was before today’s “only if North Jersey backs out” stance.

In addition to being the new owner of the Trump Taj Mahal, Icahn is also the owner of Atlantic City’s Tropicana.

Although Icahn Enterprises, the parent company of the Tropicana and Trump Taj Mahal, recently reported a 20.3 percent year-on-year revenue drop in 2015, Icahn could now bolster his position in the New Jersey gaming market with his new venue.

At its peak, the Trump Taj Mahal boasted 48 poker tables and was the second-largest in Atlantic City, only behind the Borgata. Although the poker room closed its doors in 2014, Icahn could look into reviving this area of the business and make the casino “the” place to play poker in New Jersey.

And if he were able to do this and build up a strong reputation for high quality poker, there’s every chance he could transfer that popularity to the online poker world.

His other casino, the Tropicana, currently holds an iGaming license within the state and under this license it operates two casinos: TropicanaCasino.com and VirginCasino.com.

With a working relationship with the New Jersey Division of Gaming Enforcement (NJDGE) already in place, there’s every chance he could use that position to bring more Internet gambling options to New Jersey in the coming months.

If they keep Trump’s name i will never play there, is so insulting to educated people to be inside one of his buildings,