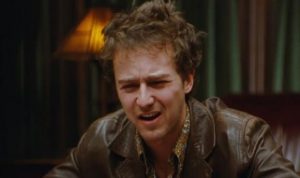 “Worm,” played by Edward Norton in Rounders, who described the Taj Poker Room as a place where “the sand turns to gold.” (Image: Miramax Films)

The Trump Taj Mahal is expected to close on September 4th, and with it the newly refurbished poker room, which will further constrict an already shrinking live poker market in Atlantic City. It will bring the number of poker rooms in the resort town to just five: the Borgata; the Golden Nugget; Harrahs; The Tropicana; and the WSOP Poker Room at Bally’s.

The Taj Poker Room, immortalized in film by a scene in Rounders, was once a thriving hub of live poker; during its heyday, perhaps, the mid-nineties. In the movie it was the setting for Mike McDermott’s bluff against his hero Johnny Chan, which he made “just to know” if he could. It was where Worm used to enjoy “check-raising stupid tourists, taking huge pots off of them;” the poker room, he said, “where the sand turns to gold.”

In February 2015, when the room closed its doors, it was no longer profitable, and meanwhile the casino’s owner, Trump Entertainment, had declared bankruptcy. Billionaire investor, Carl Icahn, who held the majority of the casino’s $286 million debt, stepped in and rescued it from the courts, offering to turn the debt into equity.

He also offered to invest $100 million in the casino, but only if the city would grant him certain concessions, which were duly granted. These included cessation of workers’ healthcare and pension benefits. Until the announcement of the closure last week, the union had been picketing the casino in protest for weeks.

The reopening of the Taj poker room had been part of Icahn’s promised investment. But the number of tables had been cut to 25, from 40 at its peak, and attendance was described as “lackluster” on the opening day by local press.

Faced with industrial action, Icahn washed his hands of the Taj last week, with management saying that the property was losing millions every month and that workers’ demands were unworkable.

Icahn was also unhappy with the proposal to expand casino gaming into North Jersey, as a means to lure back casino goers lost to other states and bring them back into the New Jersey environment. Those opposed to the proposal, which will go to public vote in November, argue that it would hammer the final nail into the coffin of the Atlantic City casino industry and cause even more closures.

Proponents say that it will prevent capital flight to other states while providing new financial resources to the city through a tax on the casinos in the north that will send $20 million back to the city per year.

The Taj closure adds legitimacy to both arguments, both are highlighting the vulnerability of Atlantic City’s casinos and adding plausibility to the argument that the sector is due to bounce back.