A limited liability company linked to President Donald Trump has received permission to trademark casino and gambling services in Macau. 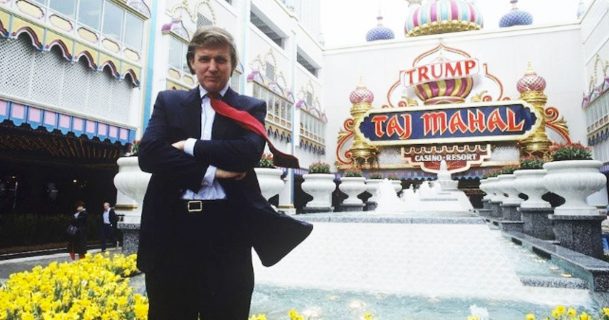 Donald Trump once referred to the Taj in Atlantic City as the “eighth wonder of the world,” but now Hard Rock International will rebrand and refurbish the run-down casino. (Image: konbini.com)

Following the publication of official government documents, it’s emerged that DTTM Operations LLC has received four trademark approvals in the Chinese gambling enclave. Although Trump signed over his business assets to a trust overseen by his two eldest sons, Donald Jr., and Eric, the company responsible for the applications listed its address as Trump Tower, Fifth Avenue, New York.

At this stage, there’s no suggestion Trump or any company linked to his brand is planning on opening a casino in Macau. In fact, his business entity has had registered trademarks in Macau since 2006, long before the casino boom happened.

The recent trademark applications were actually the same four the Trump brand has held since 2006. Under Macau law, trademarks can be forfeited for non-use, which is what could have prompted the recent re-application.

China has also reportedly sanctioned more than 10 other Trump trademarks since the billionaire took up his position in the White House. Although Asian leaders deny any unfair bias, some are suggesting that the business transactions are China’s way of currying favor with the president.

Trump’s affiliation with the casino industry began back the early 1980s. After receiving a casino license from the New Jersey Casino Commission in 1982, the real estate mogul used his property knowledge to purchase and rebrand a number of venues in Atlantic City, including the Taj Mahal (which became the Trump Taj Mahal).

The property, which at one point housed a popular poker room, shuttered for good in October 2016, and was purchased by fellow magnate Carl Icahn, but following a bevy of issues including a strike, he sold it to Hard Rock International in March. The company will do a complete rebrand under its own name, and HR chairman Jim Allen has vowed to spend $300 million to make it once-again fabulous.

It’s also true that Macau’s current crop of casino licenses will expire in 2020. Although the government has declined to say what will happen at that point, it’s assumed that operators will have to reapply or bid for a license.

If that’s the case, this could represent a chance for the Trump brand to join the casino space in Macau. As well as registering the Trump trademark for casino services, DTTM Operations LLC’s approved applications covered real estate, construction, restaurants, and hotel services.

This list of trademarks could give him the scope to create a gaming resort on par with those currently operated by companies such as SJM Holdings and MGM China. But even if Trump does decide to eventually open a casino in Macau, he wouldn’t be able to have any involvement until he’s finished his term as US president.