Tom Dwan has won and lost numerous massive pots during his brilliant poker career, but there’s one hand he’d certainly like to forget. Taking place in 2018 at the Triton Super High Roller Series,“Durrrr” lost a pot that exceeded $2.3 million, making it the largest televised poker hand in history. 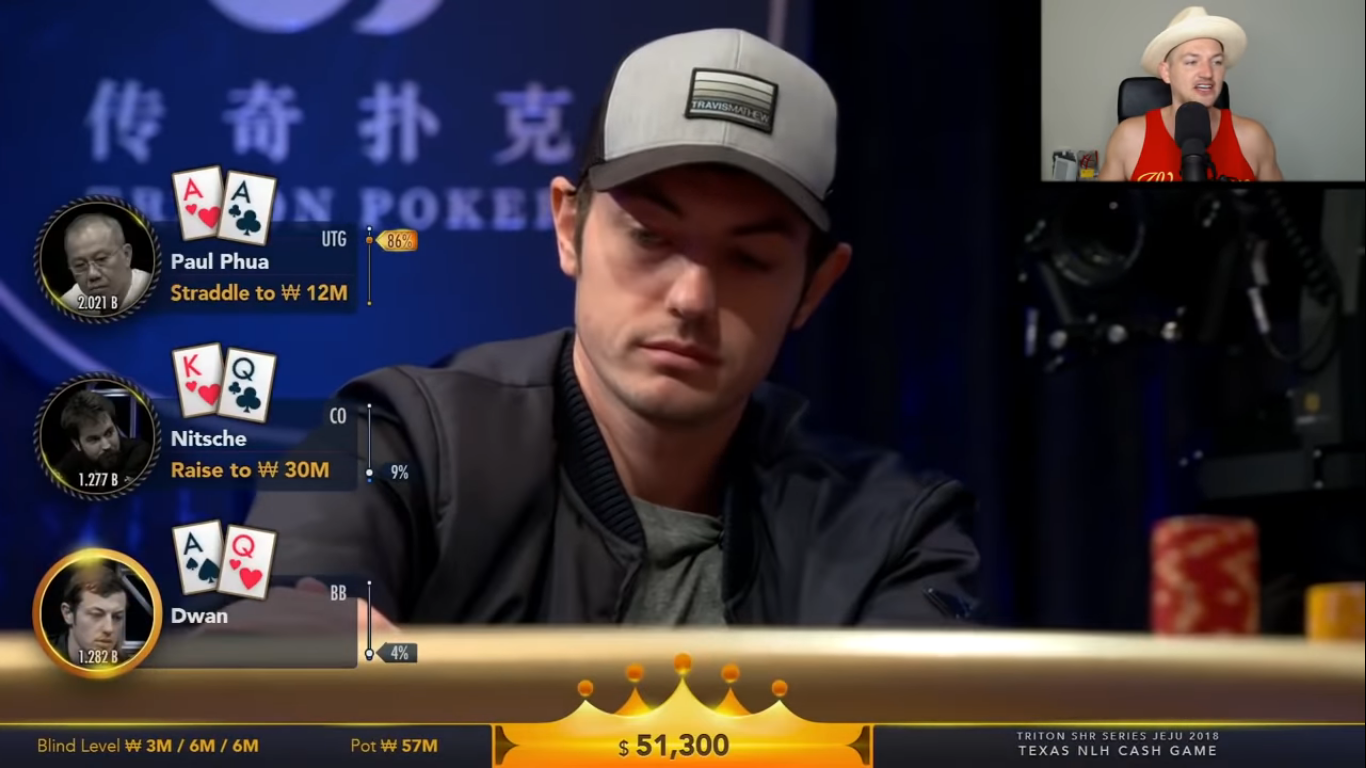 Tom Dwan is about to lose a ton of money. (Image: YouTube/joeingram1)

Dwan is one of the most iconic and popular poker players ever. He crushed it during the poker boom era on Full Tilt Poker under his screen name, “durrrr.” The American poker pro then moved on to the live cash game scene, competing multiple times on the old “Poker After Dark” and “High Stakes Poker” shows.

Dwan was a crowd favorite due to his unpredictability. He’s been known to fire up triple-barrel bluffs against some of the best players in the world, but his loose-aggressive nature leaves him prone to losing the occasional monster pot. Just ask Paul Phua.

Dwan competed in a September 2018 Triton Super High Roller Series $1 million buy-in cash game against some other big name pros such as Jason Koon and Dominik Nitsche. He exited the game early after dropping more than $1 million in cash money to his pal, businessman, Paul Phua.

Phua and Dwan have quite a history together, often competing in the nosebleed games in Macau, China. They even played the biggest pot in televised poker history against each other. In that hand, Phua had pocket aces and “durrrr” had A-Q. Joey Ingram broke down the hand on his YouTube channel.

Phua was on the straddle when Nitsche opened up with K-Q under-the-gun. Dwan, wearing a trucker hat, three-bet his A-Q in the big blind. That was music to Phua’s ears, who wasn’t about to slow play the pre-flop nuts against a loose-aggressive player like Dwan. The billionaire fired off a four-bet.

Dwan, as Triton commentator Lex Veldhuis said, may have thought Phua was trying to get cute, using Dwan’s table image against him. So, instead of just flat-calling with already over $430,000 in the pot, he tanked and then moved all-in for a total of nearly $1.2 million. Phua snap-called.

The players opted to run it out just one time and the board ran out 7-K-4-3-Q, giving Phua the $2.35 million pot, the largest in televised poker history.

“I’m going to play short deck,” a frustrated Dwan uttered on the way out.