The Fading Mirage: Between a Piece of Poker History and a Hard Rock
December 20, 2021 Business & Industry

The Fading Mirage: Between a Piece of Poker History and a Hard Rock

The volcano on the Las Vegas Strip will go dormant and gamblers on the Strip will play a different tune when the iconic tourist attraction outside The Mirage is replaced by the Hard Rock Casino’s signature guitar-shaped tower. 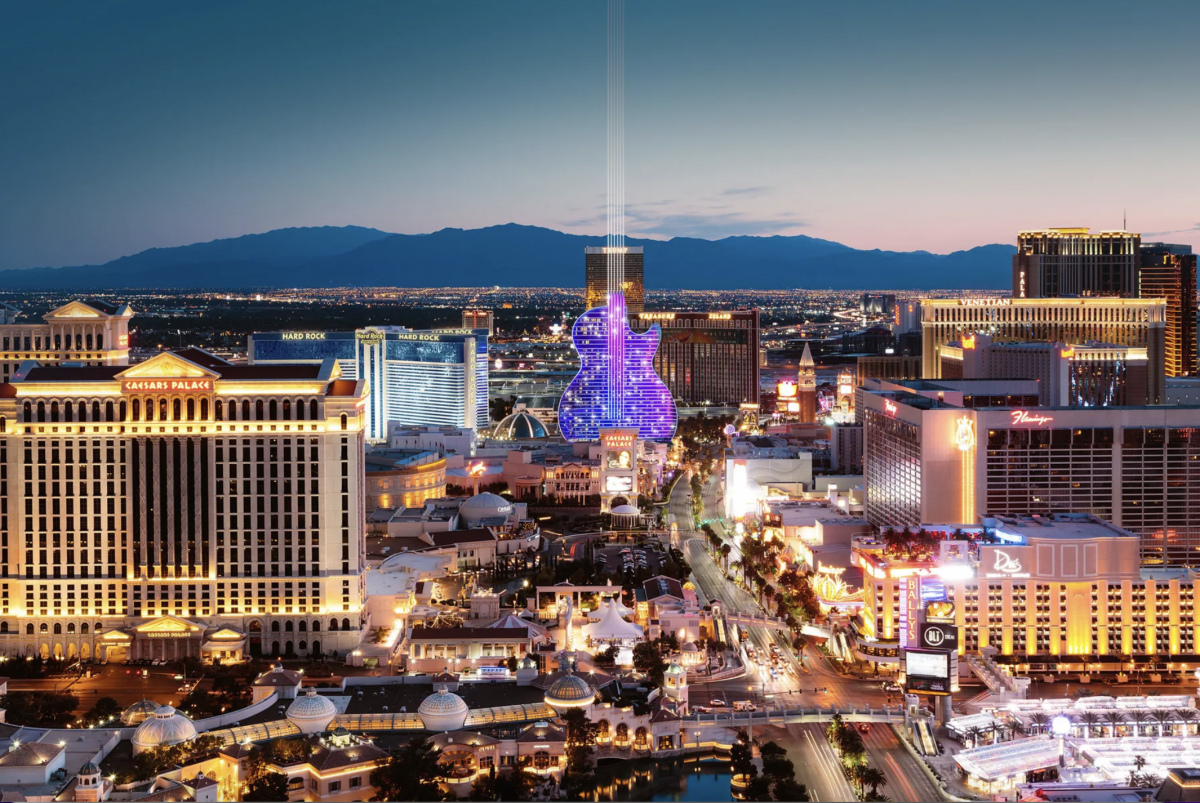 A new Hard Rock hotel and casino will change the face of the Las Vegas Strip with the addition of a guitar-shaped tower. (Image: Hard Rock)

MGM Resorts announced last week that it sold The Mirage to Hard Rock International for $1.075 billion, giving the Florida-based tribal casino chain a prominent spot on the Las Vegas Strip. The volcano will be torn down as part of what Jim Allen, CEO of Hard Rock and Seminole Gaming, called a “massive re-do.”

“I’m 100 percent committed to creating something new,” Allen told the Las Vegas Review-Journal. “Just buying something and putting the Hard Rock brand on it was never in the options.”

A guitar-shaped hotel tower will be built where the fake volcano erupted since Steve Wynn opened Las Vegas’s first mega-resort in 1989. Hard Rock doesn’t know when this massive “re-do” will start. In the meantime, MGM Resorts will retain The Mirage name and brand, and will license those to the Hard Rock for up to three years while that company finalizes its plans for its new Strip property.


A representative of the PR firm that handles Seminole Gaming said it’s too early to say if plans for the new casino will include a poker room. The Mirage permanently closed its poker room in 2020.

The sale price is higher than expected, according to Morgan Stanley analyst Thomas Allen in a client note, where he estimated the hotel and casino to be worth $650 million.

The sale only provides Hard Rock with the rights to operate the soon-to-be-former Mirage, and doesn’t include the nearly 80 acres of Las Vegas Strip real estate the casino sits upon.

The property will be owned by VICI Properties, a real estate investment trust (REIT) based in New York. The firm specializes in casino properties and entered a purchase agreement with MGM Growth in August for $17.2 billion. MGM Resorts will own 1% of VICI. The sale is expected to be completed next year.

MGM Growth is a REIT that was formed by MGM Resorts in 2015, and which went public in 2016. Hard Rock will lease the land for $90 million a year.

“By working collaboratively with MGM Resorts to sell The Mirage operations, we are able to grow our pre-existing partnership with Hard Rock as they expand their gaming operations onto the Las Vegas Strip, the most economically productive street in America,” VICI President John Payne said in a statement.

VICI is the landlord for Hard Rock Casino in Cincinnati, as well as for 28 gaming facilities comprising over 47 million square feet, approximately 17,800 hotel rooms, and more than 200 restaurants, bars, nightclubs, and sportsbooks, according to a press lease from MGM Growth.

The deal makes VICI the landlord to 15 MGM Resorts properties across the country. Collectively, it will add  32,400 hotel rooms, 1.5 million feet of casino square footage, and 3.6 million of convention space square footage to VICI’s portfolio, according to the same release.

The rent for these properties will be $860 million a year.

The center of the poker world

Between 1989 and 1998, The Mirage’s poker room was, arguably, the center of the poker universe.

“The Mirage was the place to be. It was the Mecca of poker,” said Daniel Negreanu in “Stories from the Felt – The Mirage,” a short video by the poker streaming service PokerGo. “Everything about (The Mirage) was spectacular.”

“From 1989 to 1998, I don’t remember a day that I would go into the poker room and not find a game to play,” said Eskandani, a 2018 Poker Hall of Fame inductee who, as a television producer, is responsible largely responsible for the poker boom.


Eric Drache, a 2012 Poker Hall of Fame inductee, had a full career managing poker rooms for nearly two decades before he was tapped by Steve Wynn to set up the room. Drache was the WSOP’s tournament director from 1973 to 1988 and is responsible for many poker innovations, including satellites. His role in poker history is expansive.

Wynn gave him full control of the room, including determining where it should go in the casino.

“It wasn’t tucked away behind the sportsbook. It’s in the middle of the casino so that people who were getting out of dinner or shows, they’d walk by it, and you know, the guys would look and say ‘Oh, I want to play this for a little bit,’” Negreanu said in the piece.

Zolotow added it was situated “so somebody can walk out of the craps pit with a wad of chips and say ‘Boy, I’m tired of standing up, I want to play some poker,’” a grin on his face.

This also made the poker room part of the beating pulse of the casino, as well as a juicy spot for both the sharks and the dreamers, even fictional ones like Mikey McDermott from “Rounders.”

“I want him to think that I’m pondering a call, but all I’m really thinking about is Vegas and the fucking Mirage,” he says in the movie’s first scene, moments before KGB stacks him. McDermott further expounds on The Mirage’s place in poker history as he begins his “Ali-like return to the ring” with a trip to Atlantic City later in the film (below).


And right then, just like that, playing poker at The Mirage was added to the to-do list for many aspiring players at the time. Well, it’s now too late.

In 1998, the Bellagio opened and the players followed the liquidity that the newer, bigger, and fancier mega-resort brought. Still, The Mirage’s poker room endured for another 22 years until Covid — and all that came with it — shuttered it for good.