There were 35 very happy professional poker players after being selected via lottery for the 2017 Super High Roller Bowl, a $300,000 buy-in tournament at Aria Resort and Casino.

One of the game’s most iconic players, Daniel Negreanu spun the wheel, popping out 35 balls each numbered to represent one of 54 hopeful entrants. Poker Central showcased the lucky 35 that were chosen live from the Las Vegas hotel on Facebook. 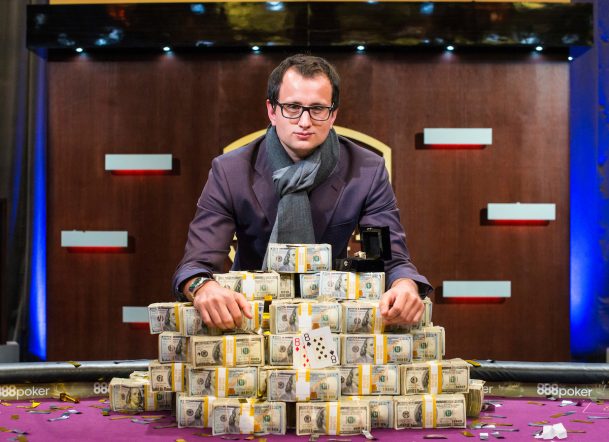 Nineteen pros who hoped to get into the May event may be left in the dust. The only chance they have left is to hope that they are one of the 15 remaining entries selected by Aria officials. But only some of the 19 that didn’t get picked will get into the tournament.

Ironically, Negreanu was one of those who didn’t make the cut. He has entered this tournament the past two years and was hopeful to make it three in a row.

“My ball was the very next ball to be chosen! Didn’t make the cut to play the SHRB but am hopeful I’m chosen for one of the 15 reserved spots,” Negreanu posted on Twitter.

He wasn’t the only player whose ball didn’t pop up. Jason Mercier, the 2016 WSOP Player of the Year, will need Aria to add him to the field. Same goes for Daniel Colman, Justin Bonomo, and Dan Smith.

Phil Hellmuth and Phil Ivey, two players who typically compete in the richest events, didn’t put their names on the list.

Some of the stars who made the cut included two previous champions, Brian Rast and Rainer Kempe, both of whom will have an opportunity to become two-time winners.

Poker Hall of Famer John Juanda is in. A cash could get him over $20 million in lifetime earnings. Erik Seidel, the only player to cash in this tournament the past two years, had his ball selected. He’s creeping up on Negreanu for tops on the all-time money list and a cash at the SHRB could push him to the top.

David Peters, the 2016 GPI Player of the Year, is in. The player he surpassed for that title in the final days of the year, Fedor Holz, will be joining him.

There will be a total of 50 players buying in for $300,000 in this rake-free, high-stakes event beginning May 28th. The players will be competing for a share of $15 million.

Last year’s tournament was televised on a 30-minute delay by CBS Sports Network. In 2015, NBC Sports Network had the broadcast rights.