The kingpin of poker tournaments — the World Series of Poker (WSOP) — is still a few weeks away, but the Las Vegas summer poker grind kicks off Monday, May 14 at The Venetian with the DeepStack Championship Poker Series. The events will feature more than $31 million in guaranteed prize pool money, including five seven-figure guarantee Mid-States Poker Tour (MSPT) events. 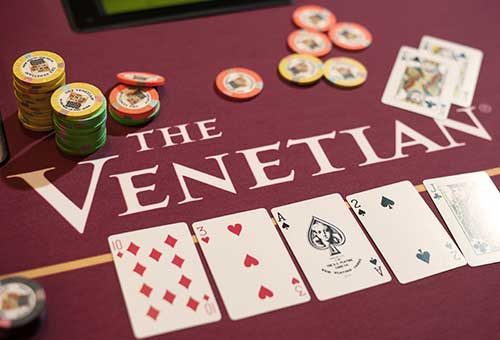 Kicking off a long summer of poker action in Las Vegas, The Venetian’s Deep Stack series begins on May 14. (Image: The Venetian)

If you’re part of the anti-Sheldon Adelson crowd, you may want to sit this series out. The GOP mega donor who may never quit his fight to ban online poker is the CEO of Las Vegas Sands, the multibillion-dollar casino development company that owns the Venetian.

For the rest of you who will be in Las Vegas this summer, the Venetian series runs until July 29, with a total of 150 tournaments and buy-ins ranging from $200 to $5,000.

What makes this series so appealing — beyond the massive guarantees — are the mixture of poker games (NLH, Omaha 8, PLO, PLO 8, Stud 8) at various price points. The championship series kicks off on Monday at noon with a $340 buy-in DoubleStack No-Limit Hold’em, two-day event that has a $100,000 guaranteed prize pool.

The Venetian’s summer tournaments have reasonable blind structures that are better than most WSOP events. Players in Monday’s series opener, for example, will receive 25,000 starting chips and play 40-minute blind levels.

The first major event in the DeepStack Championship Poker Series begins May 24 with the $600 buy-in SuperStack No-Limit Hold’em, $250,000 guaranteed tournament. Day 1A and 1B (May 25) will take place at Venetian, and then shift to the attached Sands Expo Convention Center — the venue that will host much of the remainder of the series — for Day Two.

The series is highlighted by five Mid-States Poker Tour events that each guarantee at least $1 million.

This is just the beginning of what is going to be a crazy summer of poker in Las Vegas.

Seems like a really good series to lead into the WSOP

I wish they would do something like this in Australia would be a nice change from the same old $50+5 NL tournament that runs once a week around here.

I can’t wait till they introduce stud into the live scene .

what a great series, I hope someday to play something similar or this series.
my best wishes for the legion of forum players that can go to play.
I hope to see images uploaded by those who can play it