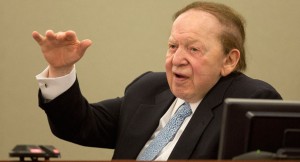 Sheldon Adelson will join Steve Wynn as keynote speaker for the upcoming Global Gaming Expo (G2E) in Las Vegas. The two will be the highlight of the many speakers who will take the podiums as part of the “All-New” G2E, which will be held September 30 to October 2, 2014 at the Sands Expo and Convention Center behind the Adelson-owned Venetian.

Since Adelson heads up Las Vegas Sands, his spot as one of the keynote speakers likely came with the deal for hosting G2E. He has also been in the gaming industry for years and is one of the leaders of the casino world. Though his recent campaign to outlaw online gambling in the United States and in other countries where he can exert influence has grown to alienate him from many of his associates in the gaming world, his influence remains prominent.

The gaming world will undoubtedly listen closely to his speech at G2E this fall.

While Adelson has taken an unwavering stance against online gambling, Wynn Resorts Chairman Steve Wynn has been noticed for his ever-changing opinions on the issue.

Wynn will be the first of the two speakers, as he is set to talk to the G2E audience late in the afternoon on September 30 in the Titian Ballroom. He has been a longtime asset to and success in the gaming world.

Wynn’s relationship to online poker and gaming has changed with the wind, some might say. He seemed to be on board with Internet poker in the United States before Black Friday, as he was in talks with PokerStars to partner for an online gaming endeavor. His company has also applied for a license in New Jersey to compete in its Internet gaming market via a partnership with 888 Holdings and All American Poker Network, but his continuing skepticism of the business has held him back from pursuing any opportunities.

Adelson, on the other hand, has no qualms about expressing his distaste for online gaming, and will likely do so when he speaks at G2E from 11:00 in the morning to noon on October 2, the last day of the conference.

He recently founded the Coalition to Stop Internet Gambling, which has increased in notoriety and lobbying efforts in 2014. Adelson has recruited some big political figures and lobbyists to help in the fight to keep online gambling out of the United States. Politicians like US Senator Lindsey Graham (R-SC) and US Representative Jason Chaffetz (R-UT) are former recipients of campaign donations from Adelson and have sponsored the Restoration of America’s Wire Act to the US Senate and House of Representatives.

Generally, Adelson does not speak at such events; rather, he sends employees like Sands Senior Vice President Andy Abboud to legislative hearings and gaming conferences to argue the anti-Internet gambling line. However, with G2E at his home base and his name at the center of the gaming world, he will likely deliver what many anticipate will be a review of his successes in land-based casino gaming and his reasons for refusing to support Internet gaming.

The annual Global Gaming Expo is widely regarded as the most important of the year for the gaming industry. In addition to the showcasing of products and seminars on the latest in gaming technology, the most important topics of the day will be discussed via panels, Q&A sessions, and in the hallways of the convention center.

In addition to Adelson and Wynn, others to speak at this year’s G2E include CEOs of companies like Aristocrat Leisure, International Game Technology, Seminole Gaming and Hard Rock International, and MGM Resorts. And one of the most anticipated speakers will be Amaya CEO David Baazov, who will participate in a seminar on October 1 on gaming manufacturing.