March and April are going to be busy months for Florida’s Seminole Hard Rock Hotel and Casino, as the poker room will play host to four premiere World Poker Tour (WPT) tournaments, two of which have a $2 million guaranteed prize pool.

The Seminole Hard Rock Poker (SHRP) Showdown kicks off March 16 and runs until April 9. It includes the $3,500 buy-in WPT SHRP Championship, which begins March 31, and the $10,000 WPT SHRP Showdown Finale on April 2. Both of those events have a $2 million purse and will be live-streamed from WPT.com. 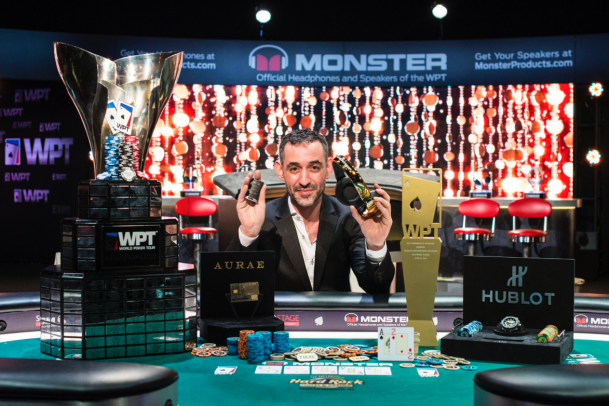 Farid Yachou won last year’s WPT Tournament of Champions (TOC) at the the Seminole Hard Rock Casino in Hollywood, Florida. The casino will play host to several WPT Events in March and April, including the TOC. (Image: Seminole Hard Rock)

The winners of those competitions will be eligible for the$15,000 WPT Tournament of Champions, which last year had a $1 million total prizepool. WPT concludes each season with the contest open only to past tour winners, including those from the current season. Farid Yachou won in 2016.

Fox Sports will broadcast the TOC final table at a future date. Long-time broadcasters Mike Sexton and Vince Van Patten will handle the commentator duties. It will be also be live streamed at WPT.com.

A new game will be featured this year, the March 29th $50,000 Super High Roller. The prize pool is pledged to reach $1 million. It’s the most expensive event of the series and will last two days. It was patterned after a similar tournament last year that drew just 20 players.

High rollers hoping for another shot at a $1 million prize pool can enter the $25,000 High Roller on April 4. This two-day event takes place during the WPT SHRP Showdown Championship.

It is equally a busy time of the year for the WPT. In addition to The SHRP Showdown kicking off in a few weeks, the Fallsview Poker Classic in Niagara Falls is already underway.

Linda Johnson to Be Honored

The tour has also announced it will recognize Linda Johnson with the inaugural WPT Honors Award for “representing outstanding contributions to the WPT and the greater poker community.”

The new distinction is given to someone who contributes to the game of poker with integrity and class. Johnson, dubbed by some as “The First Lady of Poker,” has made a significant impact to the game over the years.

“The award represents WPT’s highest honor and will serve as a lasting tradition that allows us to recognize the most important people in our industry and in the WPT’s history,”Adam Pliska, CEO of the World Poker Tour said. “Linda played a unique role in helping shape the World Poker Tour, and she embodies all that the WPT stands for.”

Johnson is a member of the original 2008 Women in Poker Hall of Fame class, along with Barbara Enright, Susie Isaacs, and Marsha Waggoner.

Besides being a studio commentator for the WPT during its first six seasons, Johnson has played poker for nearly 40 years and co-authored a pair of books on the game.