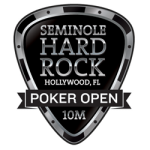 The Seminole Hard Rock Poker Open in Hollywood, Florida will be a 23-event affair culminating in a $10 million guarantee championship tournament. (Image: SeminoleHardRockPokerOpen.com)

The Seminole Hard Rock Casino Poker Open (SHRCPO)  for 2014 has revised its schedule, allowing players to potentially play in both the EPT Barcelona Main Event and the $10 million championship. Poker aficionados might remember that last year the state of Florida seriously stepped up its game when it came to big money poker tournaments.

It was just under one year ago that the Seminole Hard Rock in Hollywood, Florida shocked the world with a $10 million guarantee Main Event. Many in the industry thought there was going to be a significant overlay, as tournaments of this size are simply unheard of outside of Las Vegas and Atlantic City in the United States. Despite the critics, the tournament exceeded the guarantee by $2 million.

Now, the same event is back, as the Seminole Hard Rock Poker Open will once again resume in August of this year and again feature a $10 million championship event.

This year the Seminole Hard Rock Poker Open tournament series will be a 23-event affair starting on August 14. It will feature the aforementioned $10 million guarantee tournament, but will also boast a Super High Roller event that has an eye-popping $100,000 buy-in, to be played on September 1.

The recently published information about the tournament series in Florida is great news to travelling poker pros. Previously, this stop conflicted in dates with the European Poker Tour (EPT) Barcelona event. Thankfully there is no conflict now for players, as this series was moved, and players could conceivably play in both championship events if they so please. It seems that the strategy for the folks beind the SHRPO series has succeeded in making the tournament series a major stop through the huge guarantee, which was able to be more than fulfilled by entries last year. This particular series helps fill a void created by the WSOP hiatus in the United States and events played in Europe.

Last year in the championship of the series, it was well-known poker pro Blair Hinkle dispatching one of his popular peers in the poker world, Justin Bonomo (who recently won a WSOP event). Hinkle took home a whopping $1.75 million in the tournament, whose prize pool swelled to a little more than $12 million after everything was said and done.