Sean Winter, who was learning the game “on the fly,” took his opponents, some of whom were also inexperienced, to school in winning the US Poker Event #4, $10,000 Short Deck No-Limit Hold’em. With four cashes in as many events, he is now the overall series point leader. 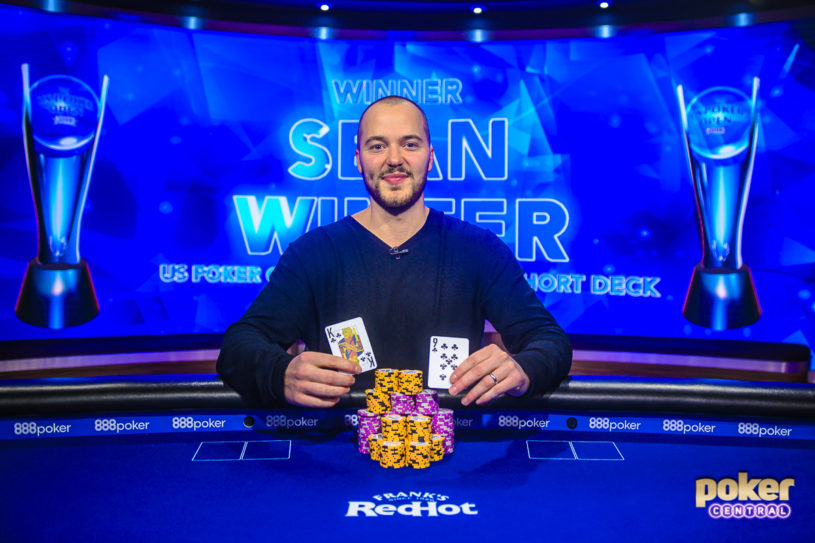 The Florida native beat a stacked final table in a game some of the 42 entrants barely even knew how to play. Short deck hold’em is a new-ish poker variant, especially in the United States.

Players such as Tom Dwan and Phil Ivey regularly compete in high-stakes short deck games in Asia. But this form of poker hasn’t fully caught in North America. Thus, we saw some, let’s just say interesting plays from otherwise skilled poker pros who were learning to play a new game.

Short deck poker, also referred to as six-plus hold’em, is similar to no-limit hold’em but with a few differences. The 2-5 cards are removed from the deck and, in tournament play, a flush beats a full house. In cash games, three-of-a-kind also beats a straight.

Day One began on Saturday with 42 entrants, many of whom didn’t know what they were doing. Sean Perry admitted he was “clueless” and went through two bullets quickly. Phil Hellmuth was talked into playing upon a visit to the PokerGo Studio.

Stopped by @PokerGo App Studio w @RumCake to show him around. THIS man (Cary Katz – my FAVORITE man in poker world) talked me into playing $10,000 Short Deck despite the fact I’ve NEVER EVER played it before, watched it before, or even know the rules. Having fun! #ShortDeck pic.twitter.com/g0wK692Bqu

The “Poker Brat” showed up fashionably late like normal. He admitted it was his first attempt at short deck poker. And he didn’t last long. About an hour into the session, he ran a set into Rainer Kempe’s straight and was sent packing. He was subdued by his standards upon exiting the table, but still complained about how unlucky he is on the way out.

The play, especially on Day One, was intense. Players flung chips around like they were going out of style. But when the session concluded, most remaining players actually knew what they were doing made the final table, except for the eventual champion.

Sean Winter had already cashed in the first three events but hadn’t won a title, until Sunday. The Florida native continued his heater with a dominating performance at the final table against six talented pros.

Yu, a three-time WSOP bracelet winner, was among the chip leaders throughout much of the tournament. Not bad considering he may not have known what he was getting into.

Only entered cuz I thought it was a $10k Short Dick tournament and my opponents would have no chance https://t.co/zCit5eUTpC

Winter and Stephen Chidwick were playing for more than just money. Chidwick, with two previous cashes and a title, held the player of the series lead with 300 points, 60 ahead of Winter.

With 200 points for first place on the line, Chidwick busted in sixth place ($25,200), earning 40 points. Winter, on the other hand, crushed everyone at the final table and received 200 points to take a 100-point lead over the US Poker Open defending champion with six events remaining.

After winning the tournament, Winter admitted to PokerGo announcer Maria Ho that he had logged just one hour of short deck play prior to this event.

“Three of the tournaments, I knew how to play the games,” he said of his hot streak. “This one, I was just figuring it out on the fly.”

well , seems it doesn t always requires to be a professional on something , or to have a long experience to to be great at it , and even teach it , it can just be a gift ,