Ryan Osman, a recently unemployed poker enthusiast from England, is hoping to write his own Chris Moneymaker-esque success story after winning a $15,000 WSOP Main Event prize package. Based on his story so far, that dream may not be as far-fetched as it seems. 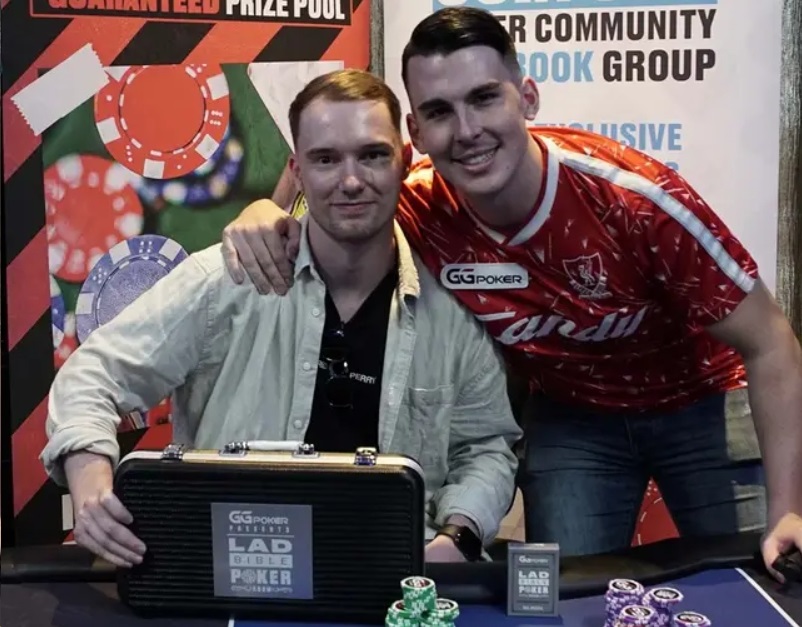 A member of the OnlyHands poker group, Osman won his way into the live WSOP qualifier via a random prize draw that attracted hundreds of entrants. Of that group, just six players, including UFC star Paddy Pimblett and poker pro Lukas Robinson, anted up at Aspers Casino, London, on Saturday.

Osman was happy just to be involved, as he’d lost his job a week before the live event. Within a few hours of play, he’d given himself a chance to win potentially life-changing money at the WSOP.

A lucky amateur heads to the WSOP

The WSOP Main Event satellite was the result of a collaboration between GGPoker, the OnlyHands Facebook group, and online media company LADbible. Hundreds of hopeful players entered last Wednesday’s Road to Vegas qualifier on GGPoker, but only a few could make it through to Saturday’s live final.

Osman wasn’t one of the qualifiers, but a last-minute dropout meant there was a spare seat at the table. A random draw took place on the OnlyHands Facebook page, and Osman was the lucky winner. He was able to parlay that free seat into a heads-up showdown with Robinson after outlasting three other qualifiers and UFC fighter Paddy Pimblett.

Robinson was the favorite to win heads-up. Osman had never played live poker in a casino, and the £1,000 ($1,350) runner-up prize would have provided a timely bankroll boost for someone who had just lost their job. The heads-up match went according to the script. Robinson’s trip queens won him the final pot and the $15,000 WSOP Main Event package.

However, because he was already going to the WSOP, Robinson flipped the script and gave his prize to Osman. The enormous act of generosity almost brought Osman to tears and means he’ll be jetting off to Las Vegas in November for the WSOP Main Event.

Naturally, CardsChat wanted to know more about Osman and how he went from losing his job to winning a place in poker’s biggest tournament.

CardsChat: What was it like playing in your first live event?

Osman: The event was amazing. GGPoker put on a show. There was a free bar, a mind-controlled beer pourer, free Spin & Go tournaments, and plenty of cash games.

CardsChat: We know Paddy Pimblett is a knockout artist in MMA, but what was he like at the final table?

Osman: Everyone at the final table was really competitive. Paddy was actually a really good poker player and ended up coming third.

CardsChat: What was your strategy going into the live finale?

Osman: My strategy was to play loose at the start, try to win some big pots and, if I went out, then so be it. Once I’d managed to get a big stack, I tightened up and only played the very best hands.

CardsChat: That strategy certainly worked out well. What’s the plan for Las Vegas?

Osman: I’ve never been to Vegas. I’ve always wanted to go, so I’m going to enjoy the experience. As for the WSOP Main Event, my strategy will be to play the same game I always do. I’ll aim to be aggressive at the start, then tighten up. This strategy seems to work for me, so I’ll probably stick to it.

CardsChat: Lukas Robinson won the event but gave you the top prize, what did you think about that?

Osman: He’s amazing, he didn’t have to do it. He played a great game and deserved the win. It’s probably the nicest thing anyone’s ever done for me. What a geezer! I probably owe him at least 10% if I win the Main Event!

CardsChat spoke to Robinson, who said that it felt great to give Osman the prize knowing he’d just lost his job. He’s also offered to coach him ahead of the Main Event.

CardsChat: Are you jabbed up and ready for the trip?

Osman: Yes, I have had my first COVID-19 jab and I’ve got my second booked for next week, so I’ll be able to play in the WSOP Main Event.

CardsChat: And, finally, what if you do a Chris Moneymaker and win the Main Event? Will you return to your career in IT?

Osman: Ha-ha, that’s a huge if. Honestly, it depends on how much I win. If I win mega-money, I’ll take a shot at becoming a pro poker player. But, most probably, I’ll just enjoy the experience and return to work after the WSOP.