Fans of Jason Somerville and his Run It Up Twitch streams are familiar with Run It Up Reno, the long running series of poker festivals that have taken place in Nevada. Now, for the first time, Somerville is bringing his live poker event series to California. 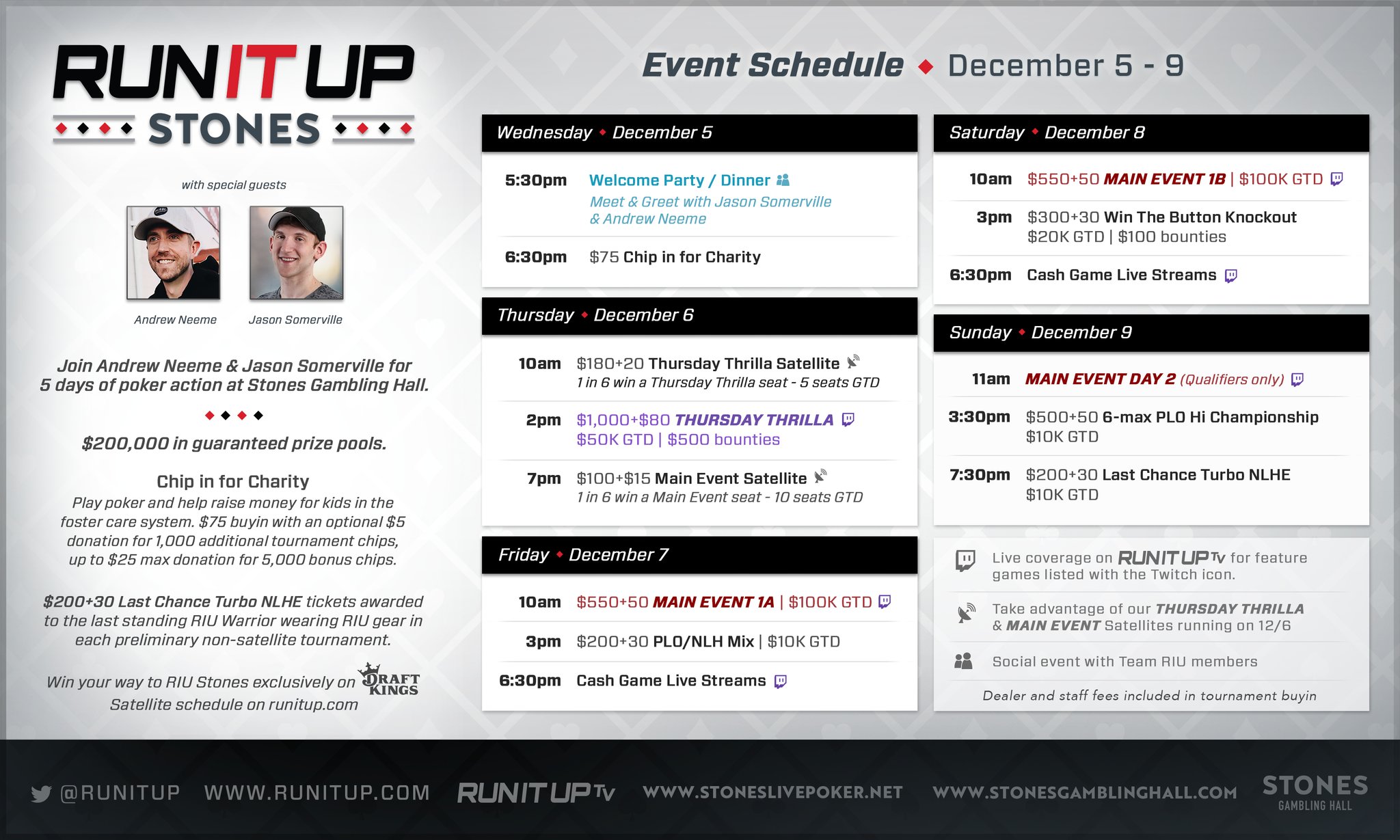 Run It Up Stones will feature five days of poker tournaments and cash games, including a charity event on the first night. (Image: Twitter/@runitup)

The next live casino edition of Run It Up will be hosted by Stones Gambling Hall in Citrus Heights, California, with tournaments and other festivities taking place from Dec. 5-9.

Stones Building on Relationship with Somerville

Run It Up Stones will be hosted by Somerville and poker vlogger Andrew Neeme. Beginning with a welcome party and dinner on Wednesday night, attendees will have the chance to play in a variety of different poker tournaments, ranging from a $600 Main Event taking place over the weekend to a $75 charity tournament designed to raise money for children in the foster care system.

Somerville has an established relationship with Stones. He helped the venue set up their StonesLive streaming system, which broadcasts live poker several times a week. Since then, Somerville has returned to Stones, including playing in a PokerStars Moneymaker PSPC Tour event there in August.

While this version of Run It Up will be more compact than those hosted in Reno, players will still enjoy the customary range of classic and unique tournament formats. Along with plenty of Texas hold ’em, there is a PLO six-max event, a PLO/NL hold ’em tournament, and even a “Win the Button” knockout event, in which the winner of each pot sits in the button seat for the next hand.

On Friday and Saturday night, there will also be live streams of cash games, with the Main Event and the Thursday Thrilla tournaments also being streamed on Twitch.

For Stones, the timing of the Run It Up series worked out perfectly. The Chip in for Charity tournament was already planned for the same week, with a Quantum tournament that allows players to buy in at different times for different amounts of money starting on Dec. 10.

“For me, having the whole event rolled together is just kind of mind-blowing,” Stones social media manager and tournament director Justin Kuraitis told PokerNews. “I hope Northern California poker players respond the same way, because I think this is an incredible series of events coming up.”

The Stones event is coming hot on the heels of Run It Up Reno VII, which took place in late October at the Peppermill Resort in Reno, Nevada. That gathering was an 11-day festival with multiple tournaments each day, including contests in variants like Taiwanese Poker, 3-Card Super Hold’em, and Short Deck Hold’em, among others. The series also included a stop on the Moneymaker Tour, awarding platinum passes to the PokerStars Players No Limit Hold’em Championship.