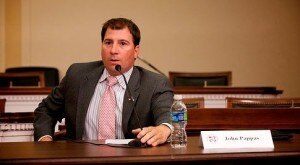 John Pappas says that the RAWA hearing went about as well as could be expected. (Image: flickr/PPA)

The Restoration of America’s Wire Act (RAWA) received its first hearing last week, when the House Judiciary Subcommittee on Crime, Terrorism, Homeland Security and Investigations listened to testimony about online gambling and what exactly RAWA would mean for America from a variety of witnesses.

With most of those witnesses having strong anti-gambling backgrounds, most observers expected that the proceedings would be heavily biased in favor of RAWA.

But while it was certainly true that the hearing as a whole favored RAWA, things weren’t quite as bad as many had feared.

That’s an opinion also held by Poker Players Alliance executive director John Pappas, who told PokerNews that given the situation, the PPA couldn’t be disappointed about how the hearings went.

“My feeling is we walked into a potentially really bad hearing and walked away with a lot of skepticism about the bill,” said Pappas.

States’ Rights Argument May Have Been Effective

One promising avenue of attack for opponents of RAWA was bringing up a states’ rights argument. Essentially, RAWA would impose regulations on the states, which have traditionally had control over the regulation of gambling within their borders.

It’s the kind of argument that might appeal to conservatives and libertarians in the Republican Party: the very same legislators that Sheldon Adelson and others who oppose online gambling are likely to be lobbying to support RAWA.

That viewpoint was represented at the hearings by Andrew Moylan, executive director of the R Street Institute. Moylan provided a conservative voice on the panel that was against RAWA for reasons GOP members of the subcommittee might get behind.

“RAWA’s potential overreach in failing to exempt intrastate activity is unwise from the perspective of federalism, but it could also prove largely unnecessary,” Moylan said. “If a state wishes to prohibit gambling within its borders, it has sufficient power to do so.”

That argument seemed to hold some sway. Judiciary Committee chair Bob Goodlatte (R-Virginia) has long opposed gambling, but expressed concerns during the hearing about the states’ rights issue, highlighting the fact that there are divisions on RAWA even among the GOP.

Lack of Regulators Lead to Rhetoric, Not Evidence

Perhaps the most frustrating part of the hearing for the PPA and other online poker supporters was the fact that there were no regulators invited to testify at the hearings.

Online gambling is legal in three states (Nevada only offers online poker, while Delaware and New Jersey also offer casino games over the Internet), and yet nobody on the panel had any regulatory experience in the industry. Instead, Pappas said, RAWA supporters instead relied on the same rhetoric they’ve been using for years.

“It was a little surprising that supporters of the bill didn’t bring to the table and concrete examples of underage access or geolocation violations,” Pappas said. “It’s amazing to me that they’re still relying on rhetoric and can bring no evidence to the discussion.”

The PPA did count one major success on the day of the hearing, as they held demonstrations on Capitol Hill to explain the technology that helps make online poker safe and secure in the states that offer it. While no members of Congress attended, some of their staff members did, including one delegation you might not expect.

“[Jason Chaffetz’s (R-Utah)] staff was there and sat around with our technical experts to ask some questions,” said Pappas. “I don’t know if they got back to Mr. Chaffetz before the hearing, because he still seemed pretty insistent these technologies didn’t exist.”