PokerStars Teams with Jones and Sons to Launch Restaurant 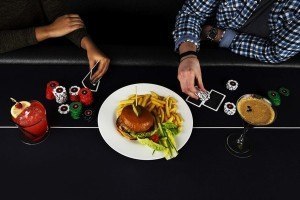 PokerStars and Jones and Sons restaurant have created the world’s first “pay-by-poker” restaurant to celebrate the kickoff of the UK and Ireland Poker Tour. (Image: https://billetto.co.uk)

PokerStars has introduced a novel way for poker players to combine their love of the game and the need for quality food.

As one of the biggest names in poker, it would be easy for PokerStars to rest on its laurels supported by the countless customers across the world.

Yet the popular online poker room is kicking off an innovative way to not only promote their brand but let diners use their skills to pay for a meal.

All You Can Eat… Almost Literally

PokerStars is collaborating with the renowned Jones and Sons restaurant to create a special place where your performance in a game of poker will determine the food bill.

Dubbed the All-in Kitchen in Haggerston, London, this pop-up restaurant will host a three day event from January 19 to 21. The event is meant to celebrate the kickoff of the 2015 United Kingdom and Ireland Poker Tour (UKIPT) in London.

During those three days, diners at the restaurant aren’t forced to play poker to eat and can instead pay the £50 ($75.80) per head menu fee.

But the fun of the All-in Kitchen experience is really being able to sink your teeth into poker and play some hands in hopes of skimming a bit off the top of the bill, or dining completely for free.

Customers who decide to dive into the poker experience will receive 10,000 chips to use in three hands of play.

Finishing the tournament with over 10,000 chips means that you won a free three-course gourmet meal. Even those who don’t get their meal on the house are still coming out with a great deal.

Tickets for the limited event have already sold out which alludes to how popular this kind of event would be for poker players and fans of the game.

For Andy Jones, founder of Jones and Sons, the All-in Kitchen and collaboration with PokerStars is a perfect way to combine his two loves of poker and food.

“I love food and never shy away from the tables when I get the chance, so having the opportunity to create a menu that combines two of my favorite things was something I jumped at,” said Jones. “Embracing poker within the dishes was a lot of fun and some of the dishes that hit the cutting room floor were a bit out there, but I can’t wait to see the results and serve up some Aces.”

The UKIPT’s London leg will run from January 20 to 25 and takes place at the Hippodrome casino.

However, the Daily Mail reports that plans are being made to bring the All-in Kitchen concept throughout the British Isles during all the 2015 UKIPT stops.

Blending the worlds of poker and food is a clever idea that PokerStars has capitalized on.

The importance of providing a unique experience on the tournament circuit is hard to ignore. As players travel the world and compete in some of the biggest cities, they are going to want to eat without breaking the bank on subpar food.

Inspiring readers to “grow fatter with me,” Fricke’s blog only has two reviews on it but it does show the importance of good dining while attending major events like the World Series of Poker or spending time in a gambling mecca like Las Vegas.

With the expansion of the tournament scene across the US, it wouldn’t be a terrible idea for some of the bigger names in poker to follow PokerStars’ suit.

Highlighting quality dining locations close to casinos or sprouting up “play to eat” restaurants could be an innovative trend for operators wanting to appeal to multiple markets.

As the 2015 UKIPT continues it will be interesting to see if PokerStars and Jones and Sons have a winning concept on their hands.

This is a fun idea!

Have a nice day