MGM Resorts announced Monday that the Aria poker room will reopen to players on Wednesday with a setup similar to that of the Bellagio, a fellow MGM property. 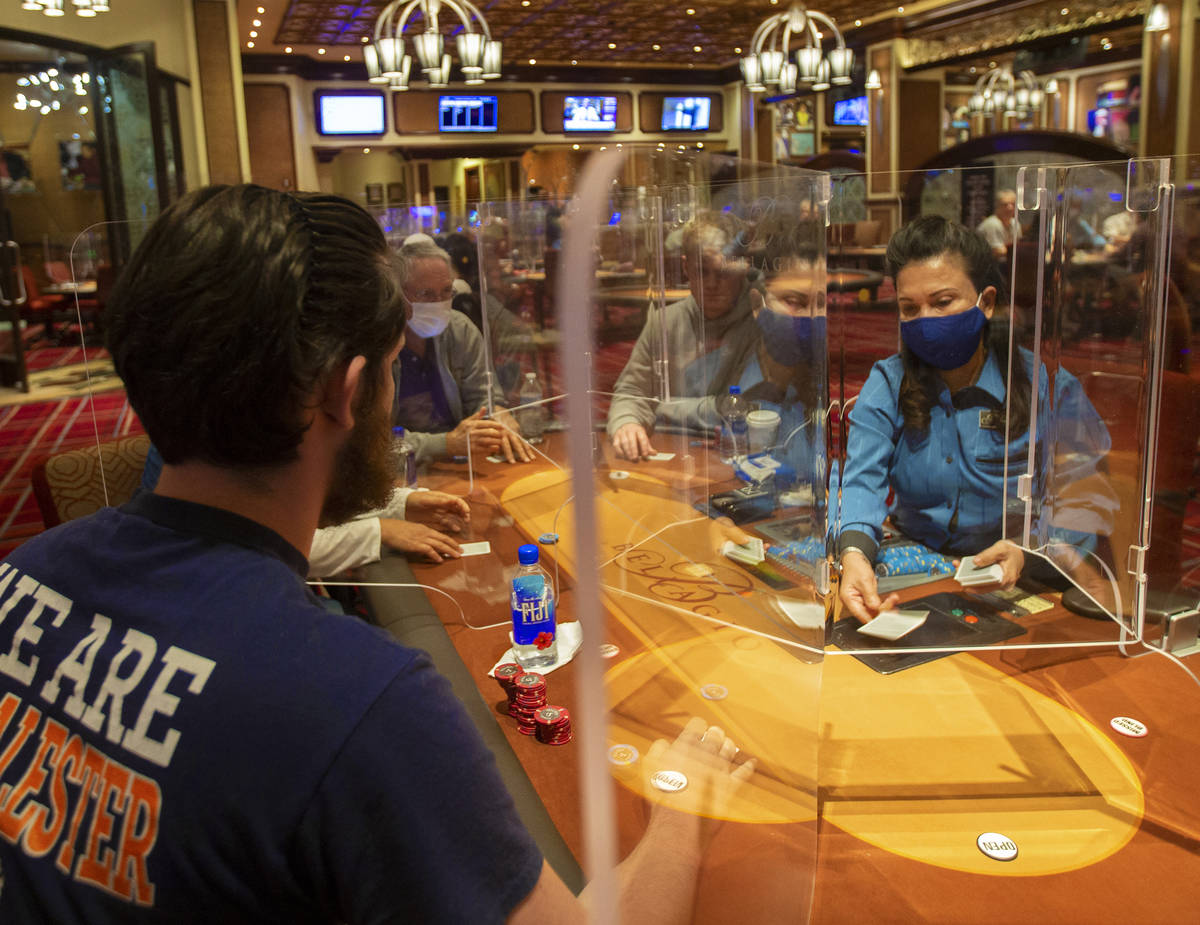 The Aria poker room will open on Wednesday with a similar plexiglass setup to that in the Bellagio (pictured). (Image: Benjamin Hager/Las Vegas Review-Journal)

The Aria will utilize plexiglass dividers to allow for six-handed games at its poker room tables.

The use of plexiglass has given the MGM poker rooms a slight advantage over the competition. Tables at Caesars Palace, The Venetian, and at other poker rooms that have reopened can only accommodate five players while abiding by social distancing regulations.

Six players are still far less than the nine or 10 usually sitting around a Las Vegas cash game table during busy hours. But poker rooms and players are accustomed to six-handed play as a shorthanded option, making it a valuable upgrade for operators. Some casinos, including The Orleans, have indicated they may take similar steps, while others are content with five-handed play without dividers.

The Aria says it will open its poker room 24 hours a day, seven days a week. The room will feature 14 tables available for cash game play, with no tournaments on offer for the moment. The room operates 24 tables when running at full capacity.

The Aria will prohibit players from bringing food into the poker room, according to a spokesperson. The room will not permit spectators.

Station Casinos has also announced its plan for reopening its poker rooms, though gamblers will have to wait a bit before they can shuffle up and deal. A spokesperson told the Las Vegas Review-Journal that rooms at Boulder Station, Red Rock Resort, and Santa Fe Station will open on Aug. 3.

Unlike the MGM properties, the Stations poker rooms will only offer five-handed play. The spokesperson did not announce a reopening date for poker rooms at Green Valley Ranch Resort or Palace Station.

Casinos are reopening their poker rooms as part of a race to offer casino visitors as much of the traditional resort experience as possible while maintaining safety protocols during the COVID-19 pandemic.

But the coronavirus could force some or all of these locations to shut down again in the future. Daily case numbers are rising in many states, including in Nevada. On Tuesday, Gov. Steve Sisolak made it clear that he could roll back Nevada’s reopening if outbreaks get out of hand.

“If statewide trends do not improve or get worse, I will not hesitate to take any action necessary to protect the public, including reinstituting previous restrictions,” Sisolak wrote on Twitter. “I am currently reviewing all the data to determine potential next steps.”

Sisolak has already taken some steps to ramp up precautions against COVID-19. Last week, he mandated that individuals wear face coverings in most businesses throughout the state, including while at casinos.