Poker rooms in Vietnam are back in business, but anyone outside the country wanting to join the action will have to wait. News of live poker’s return came as the number of local COVID-19 infections dropped to zero. 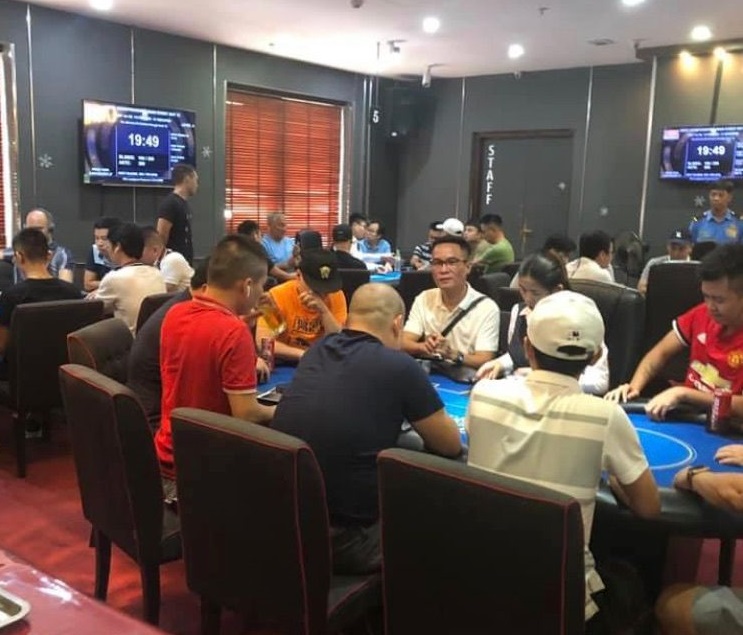 The Suncity poker room in Hanoi held its first MTT since coming out of COVID-19 shutdown — with no masks or plexiglass dividers necessary. (Image: Harry Duong/Facebook)

A post in the RealGrinders Facebook group on Saturday showed a full poker room at the Suncity casino in Hanoi. Group member Harry Duong said it was the first multi-table tournament since the country came out of its lockdown. Global health observers say Vietnam’s success in containing the virus provides a model for other countries to follow

Duong’s pictures show nine-handed tables and nary a face mask in sight. Members of the Facebook group were initially critical of the absence of masks. However, other commenters were quick to point out that they were not necessary as Vietnam had successfully snuffed out the COVID-19 threat.

With COVD-19 numbers low and the infection contained, Vietnam began opening up in mid-May, and the Suncity Casino reopened on June 28. The first poker tournament in Hanoi took place this weekend, with almost 400 players anteing up, according to Duong.

Given the recent images from Las Vegas and beyond, there are concerns that poker players in Vietnam are gambling with their health.

However, as group member Brian Thorp pointed out, COVID-19 infection rates in Vietnam are extremely low. Despite having a population of almost 100 million, Prime Minister Nguyen Xuan Phuc prioritized public health over the economy.

Acting swiftly, he closed the borders in late January after reports of a potentially deadly virus emerged from Wuhan, China. Schools and businesses were closed, and the monitoring of vulnerable people started.

By March, when the rest of the world was only just reacting to COVID-19, Vietnam was well into its lockdown. Although tactics such as locals reporting neighbors for social distancing issues have been criticized by human rights groups, the overall strategy appears to have been effective.

As of July 1, Vietnam had 355 reported cases of COVID-19 and only 20 deaths. Such a low fatality rate seems startling given the statistics from countries with smaller populations. However, the International Monetary Fund (IMF) described Vietnam’s actions as a “roadmap” for others.

Many casinos in the US that reopened early have been forced to backtrack over the last two weeks. Elsewhere in the world, poker rooms are reopening, but it’s far from business as usual.

Poker may have returned to normal in Vietnam, but the rest of the world can only watch from the rail. Vietnam’s borders remain closed to outsiders and there is no current indication on when that will change.

Despite not being able to visit Vietnam, players around the world are gradually returning to the felt. King’s Casino Rozvadov, in the Czech Republic, has been offering mask-less poker games since mid-June.

In Spain, Casino Barcelona reopened its door in late June. Patrons are required to wear facemasks and social distancing measures are in place, meaning poker games aren’t running at this stage. However, the wheels are in motion, unlike the UK.

Despite hopes that lockdown easing would allow casinos to open on July 4, no such changes were announced. Prime Minister Boris Johnson gave stores, non-essential businesses, and pubs the green light to reopen, but left casinos out in the cold.

The move has been criticized. However, Johnson is fearful that reopening too soon will lead to similar spikes to those currently happening in the US.

Around the world, it’s currently a tale of contrasting COVID-19 strategies. Vietnam’s authoritarian approach has brought poker back to the table sooner than most. In contrast, the US is being forced to repeal recent decisions to get back to business as quickly as possible.

Over in Europe, the cautious approach has given some players the opportunity to ante-up, while others are still waiting for their hands to be dealt. The overriding message, however, is that live poker is slowly but surely returning.