High-stakes poker player Tony Bloom made his fortune betting on soccer, so much so that he was able to buy a professional team in 2009. At this weekend’s kickoff to the English Premier League’s 2017-18 season, the man known as “The Lizard” now owns the squad he cheered as a boy, Brighton and Hove Albion FC, and in taking them all the way to the EPL, he’s highlighting British football’s sometimes complicated relationship with gambling. 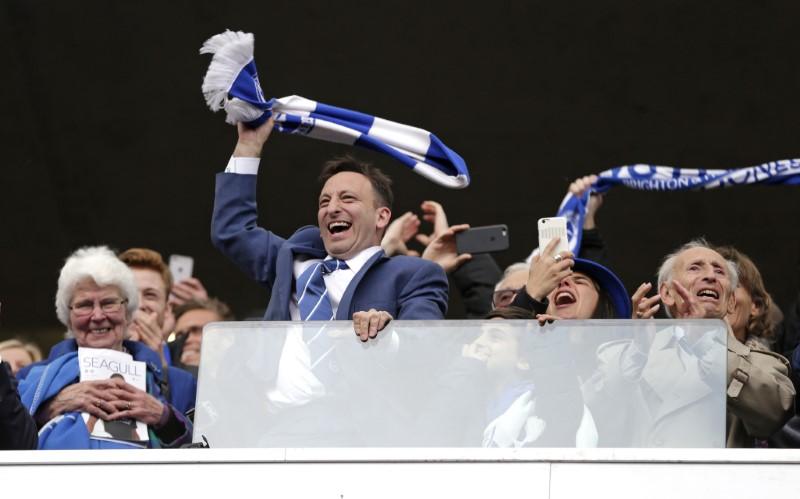 Tony “The Lizard” Bloom made a fortune by transforming soccer wagers into a high-stakes financial market, and now he’s taken his boyhood team all the way to the Premiere League, where officials welcome his bet. (Image: Reuters UK)

When Brighton takes the pitch on Saturday, it will be the first time the squad has competed in the English Football Association’s (FA) top tier in 34 years. Albion fans attribute the climb, from two levels down in League One eight years ago, in part to Bloom’s pumping money into the club (an estimated $200 million) while building team strategy on data analytics.

Bloom earned his reptilian nickname at the poker table, where he was known for his cold-blooded, stealthily analytical approach. At the tables, it’s earned him more than $3.5 million, with his most recent live tournament cash coming in the 2016 $111,111 WSOP Big Drop (27th for $166,622), and his biggest score in 2011, when he finished 2nd in an Aussie Millions high-roller event for $964,296.

But it was in the business of betting on soccer where Bloom parlayed his poker winnings into an effort that turned him into a billionaire.

Bloom, 47, is widely regarded as the most successful soccer gambler of his generation. With an advanced math education from Manchester University leading to success in both sports betting and poker, he founded Star Lizard in 2006, a betting consultancy that uses statistics to predict game outcomes and then place bets for high-rollers.

Now with a staff of nearly 200 supporting a team of traders, programmers, and analysts, Star Lizard helps Bloom’s betting syndicate of high rollers make data-driven bets on soccer and other sports.

And even though Bloom is reportedly the company’s biggest client, FA rules don’t require him to change his habits just because he has a vested interest in the outcome of certain games.

In a statement to The New York Times, a Star Lizard representative insisted, “Tony’s betting is beyond reproach in terms of integrity,” and said that Bloom himself did not bet on Brighton.

The statement also pointed to the growing role Star Lizard plays in helping sports leagues assure their matches are not fixed. “[Star Lizard’s knowledge] of how the betting markets should play out before and during the match are incredibly valuable to the anti-match-fixing work carried out by numerous football authorities.”

Football Association spokeswoman Louisa Fyans told The New York Times that when the association updated its rules in 2014, it realized some owners had significant gambling interests that might have been seen as conflicting with league rules for coaches and players, particularly as betting companies began playing a bigger role in the soccer economy.

“These clubs would be materially impaired by the F.A.’s position on betting,” she wrote in an email. “(We implemented) provisions whereby those individuals could continue to have both an interest in football clubs and in betting companies/entities but subject to very stringent rules and reporting obligations.”

Players, coaches, and staff for all teams in the FA are not allowed to bet on soccer. The league recently handed down an 18-month suspension and $40,000 fine to a Burnley midfielder who made over 1,200 bets on other teams over the course of seven seasons.

Some point out the hypocrisy of the FA’s stance on gambling, where owners and players are held to different standards.

When it comes to blurred lines between betting interests and soccer, Bloom is not alone. Business mogul Peter Coates owns both bet365 and Stoke City FC, and subsequently Coates’ two business have totally entwined themselves with stadium naming and uniform rights.

In fact, dozens of soccer teams throughout England are finding themselves more likely to entertain sponsorship offers from gambling entities. Nine clubs out of 20 in the EPL have a betting outfit as their shirt sponsor. Collectively, these companies paid $62 million for right to build their audience on the backs of players who can’t partake in the services they offer.

And with club owners like Bloom playing a bigger role in soccer, the safe bet is that such relationships will only continue to grow.