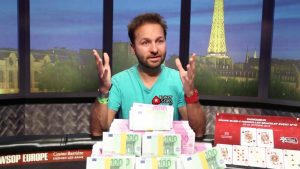 Donald Trump and Hillary Clinton are currently making headlines around the world, but it also seems they’re causing quite a stir in the poker community.

With the US presidential elections just a few months away, Daniel Negreanu and Mike Matusow have been giving their thoughts on the two candidates and what a vote for them would mean for the US.

While the two poker pros aren’t using Trump and Clinton’s possible positions on the game to inform their arguments, their tweets have certainly given members of the community pause for thought.

In fact, with the Democratic National Convention now in full swing, Negreanu has taken some time away from the high stakes games in Las Vegas to remind people that the only way to stop Trump is to vote for Clinton.

A long-time critic of Trump, Negreanu kicked off his latest round of political tweets by pointing out that the Republican nominee has threatened not to honor the US commitment to NATO if certain debts aren’t paid.

He then goes on to compare the different tactics being used by those on both sides of the political divide.

“The #DNCinPHL selling love and compassion. A dark contrast from the fear, the anger, and bleak outlook of the RNC,” tweeted Negreanu.

In contrast to Negreanu, Matusow is a supporter of Trump and believes strongly that he will beat Clinton.

Unfortunately, owing to Matusow’s persona and willingness to be less forgiving in his retorts than Negreanu, he’s taken some abuse for his recent tweets.

“I think the thing most disturbing to me is if I say truth on how corrupt Hillary is, I’m called every name imaginable on Twitter,” claimed the American pro.

Of course, both players have their supporters and detractors, but what the recent round of tweets suggests is that politics and poker pros don’t mix.

While both certainly have their right to talk about politics, some of the responses on both sides have been less then pleasant.

Regardless of the poker pros’ thoughts, either Trump or Clinton will become the next president of the US and that could mean more changes in the online poker economy.

Although neither candidate has spoken candidly on the issue of online poker in the US, Trump has at least been noted in the past as saying that he isn’t adverse to the industry.

Given the changes we’ve see over the last few years, neutrality on poker would probably be a good thing. However, we’ll have to wait and see if this remains the case in the coming months.

Trump’s VP, Pence, is a hugely against online gambling (including Poker). Check out David Tuckman’s tweet this afternoon about him.

I’m so glad to know that because it’s a top 3 issue, during brain inuries.

I had one when I made that post. A brain inJury that is.

Negreanu had to be a lib. I like him and this isn’t an attack, but he has a wishy washy personality.

Give him a few years, he is still young. He’ll see the light soon enough…