Next Shooting Location for “Poker Night in America” Announced 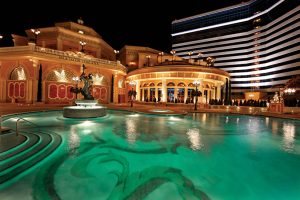 The new upcoming poker show “Poker Night in America” recently concluded their initial shooting on the East Coast and now they are heading west for more. In keeping with the positive momentum gained from the first shoot from the yet-to-debut show, the program will be headed to the West Coast to tape the second part of their broadcast.

A Night of Poker, For Two Weeks

“All of us at Peppermill Reno are happy and proud to be the host site for the first Poker Night in America celebrity cash game and tournament ever held in the west,” said George Kisler, Director of Casino Operations at Peppermill Reno. Kisler’s words reflected the stance that Peppermill strives to host the biggest and best events in the poker world. The tournament and live games will go on for ten days but, as of yet, a schedule detailing the events and tournament buy-ins has not been released. However, the Main Event of this leg of Poker Night in America will be held from November 21-24 this year.

A Little Action on the Side

In addition to all the tournament play taking place at Peppermill, there will be a high-stakes cash game hosted by “Poker Night in America.” This event will play out over two days and is filmed to be part of the show. The cash game will be a $25/$50 No Limit Hold‘em. Producers for the show have not announced any players for the cash game but said it will be by invitation.

Any player wishing to be considered for an invite must provide their own buy-in of $5,000 minimum to a maximum of $20,000. Interested players should also contact Nolan Dalla, Creative Director for “Poker Night in America” through his email at Nolan@pokernight.com. Just try not to hound the guy too much.

During its first stop, the crew behind “Poker Night in America” was in Verona, New York at the Turning Stone Casino and Resort. Unlike the upcoming West Coast filming, the first stop took place during the 2013 Empire State Poker Classic. The buy-in for the Main Event tournament was $1,650 with a guaranteed $500,000 prize pool.

Those stakes brought in popular players like Mike Matusow, Eli Elezra, Matt Glantz, Gavin Smith and Phil Laak among others. With 426 runners going for the big prize, it was the largest in the event’s history. Though sitting with some big names like Glantz, Darvin “No, I’m Not Dead” Moon and Will Failla, Adam Foster came out on top as champion. Many expect the West Coast event to draw in just as many stars.

It’s All About the Tease

To wet viewers’ appetites, “Poker Night in America” released a few teaser reels of the cash game and they have since gained a lot of attention from the community. One of these teasers show Matusow being slow rolled by Shaun Deeb who made quads on the river. Unsurprisingly, Matusow was more than a little annoyed and went into a rage that was caught on film. And we all know that nothing brings in viewers like “The Mouth” flying off the handle.

“Poker Night in America Presented by Peppermill Reno” is only the second of what promises to be three stops in 2013. The footage from these stops will be compiled into the premiere of the show, which is expected sometime in 2014. While no more stops for taping are being announced, it’s a safe bet that if “Poker Night in America” is a hit, fans can expect a lot more.