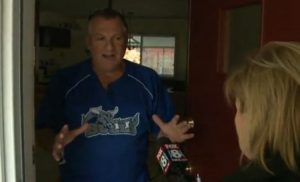 Robert Brown, the Cleveland poker dealer who faced prosecution for mislaying a card up his sleeve. (Image: fox8.com)

A Cleveland poker dealer has been cleared of wrongdoing after the king of clubs was judged to have crawled up his sleeve accidentally during a session at the Horseshoe Casino Cleveland last month.

Robert Brown, 57, was indicted by a Cuyahoga County grand jury last November in relation to the incident. Prosecutors pushed ahead with the case, despite Brown’s employers accepting the dealer’s explanation that the card had disappeared accidently, and despite no evidence of an accomplice.

The absence of a collaborator raised questions of how Brown could have  possibly been intending to cheat by secreting a card, but prosecutors were undeterred and indicted him regardless, no doubt at great expense to the taxpayer.

The case was thrown out this week.

The offending card disappeared during a session of $1-$2 hold’em, dealt by Brown in September. When the automatic shuffler detected that a card was absent, the dealer followed protocol and immediately informed the floor.

Later, while dealing at a different table, he stooped to pick up a piece of trash when the card tumbled out of his sleeve of his jacket. This jacket, his lawyer Jeff Shively assured Card Player, had “real loose sleeves.”

“A card accidentally went up my sleeve,” Brown told Fox News, shortly after the shock news of his indictment. “I deal poker, I don’t even know how it got there.”

“It was a rare occurrence, but it happens. Weird things happen in casinos,” said Shively who said he was prepared to call “half the casino” as defense witnesses if necessary.

“Everyone is so happy for this man,” he said. “He’s the nicest guy in the world and has no bitterness about this.”

Brown is entitled to feel some bitterness; not only was he facing the threat of a prison sentence, he was suspended without pay from his job for six months. This was, says his lawyer, an immensely tough time for the dealer, who is now back at work and working hard to recover lost wages.

Of course, it would have been a completely different matter had he, say, been slipping poker chips into his socks via a tubing running from his pocket down his pants legs. But this is exactly what was going on across the Pond at the Cromwell Mint Casino in London’s swanky South Kensington recently.

In January, a Romanian dealer was arrested at the Mint, accused of stealing thousands of pounds using such a system, and then passing the chips to a “beautiful Eastern European” accomplice on a fire escape during his cigarette breaks.

always look for the femme fatale !