Mistakes can help us learn and improve if we can be self-critical about our reasoning and performance. If we can’t, however, we’re bound to repeat those same mistakes over and over again. 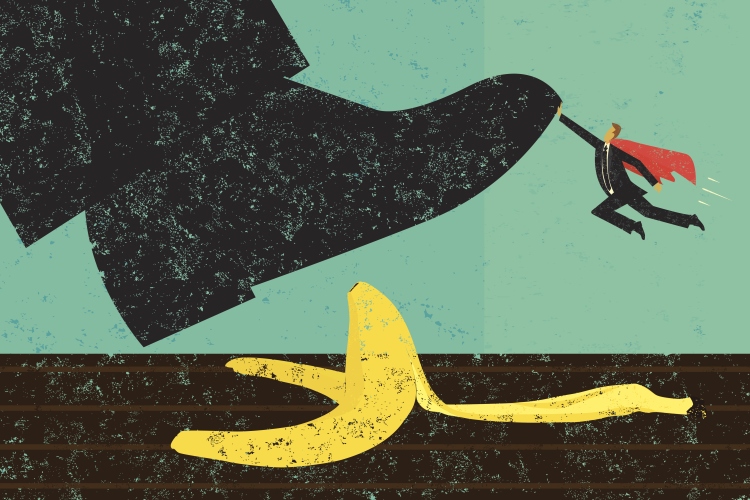 Sometimes only you can save yourself from making a painful mistake. (Image: Getty/Fortune)

Here’s an example from a recent $2/$5 game I played alongside my friend Lance.

It was a fairly loose home game with gambling players out to have a good time. In that sense, it’s typical of many home games. It was just the type of game that strong players seek, and it was the reason I gladly accepted Lance’s invitation to join him in spite of the steep, 10%, $8 maximum rake.

Lance was very active and, as I quickly learned, has a reputation for being a wild player. I observed why this was so in his first 10 hands. He’d been the aggressor in five of those hands and won two of them uncontested preflop. He also won one mammoth pot when he hit a full house on the river against a flush, with his opponent all-in on the turn.

In another key hand, he was in fourth of eight positions – two after the big blind. He had an unsuited Q-T and came in for $25 – his standard bet when entering the pot (most players came in for $15 or $20). The button and the big blind both called and they saw a flop of A♥ K♦ 4♥. The big blind checked and Lance bet $60 into the roughly $75 pot. The button called.

The turn paired the King, making the board A♥ K♦ 4♥ K♠. Lance paused for a long time — perhaps for a full minute — before he checked. The button bet $100 and Lance again paused for a long time before releasing his hand and saying that he was “ahead until the turn.” The dealer raked $8 from the roughly $300 pot and pushed it to the winner.

Lance and I debriefed the hand later. “I had QT” he said. “If that K on the turn were a J, I would have had him. Lucky SOB! But what could I do? I was aggressive, like the book says, but he obviously just got lucky and hit a third King. At least I avoided getting stacked.”

I told him that I thought he made five errors. He laughed and I don’t think he listened much to what I said, but maybe you can profit from his mistakes, and avoid compounding the problem:

If everyone folds and you’re the button with QT, and are facing a couple of nits in the blinds, you might fire off a raise. You’ll have position on anyone who enters and you might pick up the blinds or improve on the flop. So being aggressive with a broad range might make sense.

But, in fourth position, Lance had no chance to see if most of his opponents were weak before he acted. He also had the disadvantage of being in bad position for all of the subsequent betting rounds. His opponents would be able to see if he bet the flop, turn and river before they would have to act. And, they could fire in a bet if he showed weakness by checking.

Mistake #2: You didn’t assess your image in your opponent’s eyes


Lance had been raising a lot, having initiated the betting 50% of the time. That’s a huge percentage of the time to take the lead and even his dullest opponents would have likely noticed his aggression and pegged him as at least a bit of a maniac. (He confirmed to me that he’s often seen as a wild man by his opponents).

Mistake #3: You overvalued the advantage of a backdoor straight draw

When considering his relatively thin shot at hitting his inside straight draw, Lance’s attempt at a semi-bluff by C-betting the flop out of position, with nothing but the draw, was a clear error.

Mistake #4: You didn’t think about your opponents’ playing styles

Because the game was generally loose and passive, it’s not the kind of game where you want to bluff or be overly aggressive unless you have a specific — and a good — read on an opponent.

Lacking that, Lance should have assumed his opponents would respond true to form, and should have avoided making a large bluff without a much better chance of hitting something legitimately strong on the turn or river.

Mistake #5: You attributed your mistakes to bad luck

This was perhaps Lance’s largest error, as it will compound all of his other errors by delaying his necessary self-discovery about his own play.

This is also a frequent error of the poor player — they see luck interfering when a more rational observer would see their own flaws. Getting better at poker, or anything else for that matter, depends on learning from your mistakes. Absent a full-time coach to watch you play, you’re going to have to be your own observer and critic most of the time.

The first step in that process is recognizing errors after the fact so that you can correct them.

Good thinking players get better by looking carefully at their actions, recognizing their errors, and then learning from their mistakes. In the hand above, Lance made many errors, but his biggest error of all was glossing over his mistakes with a narrative that focused on his bad luck.