From Good to Not-Great: 5 Key Mistakes from Poker Players on the Rise

Good poker players deserve a lot of credit. They’re no longer rank amateurs and understand the game. They don’t play ridiculous starting hands out of position, are observant, and know how to fold. They know poker lingo, and typically act quickly so as not to hold up the game. They’re often winning players in their home games, and in a casino when considering the rake, are probably at least breaking even. 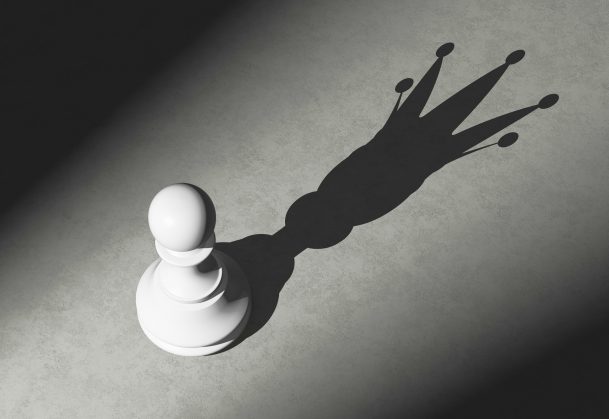 For some good and improving poker players, overestimating their own ability is what keeps them from stepping up to the next level. (Image: PsychologicalScience.org)

If you are a good poker player, congratulations. Not everyone is.

Even so, many good players still make serious mistakes that keep them from being great — or even very good – and these leaks may keep them from making as much money as they could, or should.

Check-raise bluffing, floating, three-betting light, and other deceptive moves all have their place. But good players often lack the discipline and situational awareness to avoid using them against players who aren’t observant enough to be fooled.

Good players sometimes fall into the trap of thinking they are better than they really are. This is understandable. The difference between being a poor player and a good one is large. The difference between being good and very good is less so, so they inflate the importance of what they have achieved. This arrogance also often leads them to believe, mistakenly, that their lack of success is someone else’s fault.

Good-but-arrogant players often lack the self-awareness to see their own limitations. They think that because they know what they’re doing, they’re somehow entitled to win hands from those they see as less skilled. Loose, bad players who frequently outdraw patient, tight players bother them a great deal. They are not yet good enough to recognize their own limitations, which is a major vulnerability against those who do.

Good players often learn that passivity and timidity are serious flaws in beginning and losing players’ games. While they’ve learned the importance of playing strong starting hands, they also learned the importance of being aggressive.  While these lessons are useful and generally point players in the right direction, they must be adapted for each specific situation.

Good (but not yet great) players often apply aggression thoughtlessly and cavalierly, believing that aggression alone is what rewards them. They push marginal hands expecting to see folds, yet they fail to recognize how their aggressive style leaves them open to exploitation by opponents patiently waiting for them to donk off stacks in fits of thoughtless aggression.

3. Being Too Clever by Half

Deception and trickery are useful skills we develop as poker players. Fooling players into putting money in the middle that they’re almost sure to lose is key to winning pots on days when we’re just not running good.

Check-raise bluffing, floating, three-betting light, and other deceptive moves all have their place. Good players know how to deploy them, but often lack the discipline and situational awareness to pull back against players who aren’t observant enough to be fooled. Too often, these good players try trickery when straightforward play would be most effective. Good players sometimes fail to recognize that just because they can be deceptive, doesn’t mean they should be.

Perhaps the biggest mistake good players make is not understanding where their profit comes from. It doesn’t accrue from taking on the best players in the game nor from convincing anyone else of your skills. There’s no special jackpot for table image. Good players make their money from worse players – whether they’re newbies, inveterate gamblers, drunks, or just people who have a lot of money but don’t find time to read strategy books and sites like CardsChat.

But the real flaw that gets in the way of maximizing profits is how some good players behave toward their feebler opponents. Instead of behaving in ways that encourages these players to stick around and contribute more to the game, some good players too often hurl unsought lessons, insults, jibes, and barbs at opponents who should be treated like guests of honor. But driving them away, or educating them about gaps in their game — usually in an effort to impress others at the table — is how good players can work against their own interests.

These aren’t the only mistakes that good players regularly make. They sometimes let short-term results put them on tilt, or perhaps they don’t sufficiently respect a weak player’s aggression in certain spots.. Some good players play too tightly pre-flop, and then stay too long with the few starting hands they do bring in for a flop.

But in picking a fifth and final flaw of good players who get in their own way of being great … I’d have to say:

Good players have learned a few things and improved their game. Typically, it’s about being selective with hands, being aggressive, and looking for games that with enough bad players to read some basic tells and use some deception to be profitable. In so doing, good players often practices a fairly automatic way of playing poker. They adopt some well-worn rules of play to stay out of too much trouble. Against weak opponents, such automation can be sufficient to win money. But it’s still a leak.

Truly good players must constantly match their play with specific situations they confront. This requires learning to inhibit habitual responses and replace them with more thoughtful actions. Habitual play leaves otherwise good players highly exploitable by any observant opponent who can take advantage of moves that become predictable. It also prevents profitably exploiting situation-specific actions of opponents. Ultimately, habitual play leads to mental laziness, which means failing to notice opportunities that more thoughtful and observant players will seize on for great profit.

There’s a time-honored aphorism that says, “A little knowledge is a dangerous thing.” It applies well to poker, among other things. While it’s surely better to be a good poker player than a bad one, it’s important to recognize that there’s still a lot to learn before we become experts. Failing to recognize this is what causes players to plateau at a level below their potential.

5 mistakes that you have always made and look at who not even a average poker player has ever known and yet always made these always 5 mistakes, try to avoid them