Pittsburgh Steelers owner Art Rooney says an Oakland Raiders’ move to Las Vegas is still on the table with or without Sheldon Adelson’s investment. But Raiders owner Mark Davis refused to confirm the team’s future plans.

“I have nothing to say right now,” Davis told the Las Vegas Review-Journal. 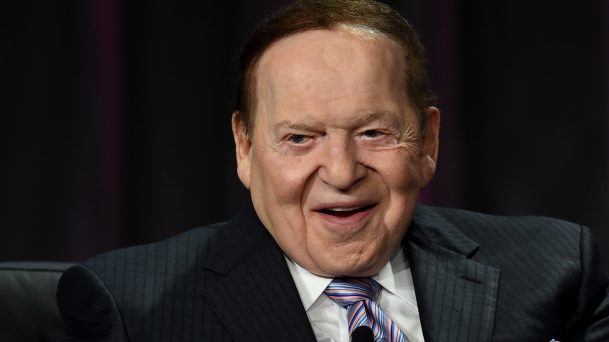 Rooney is also the chairman of the NFL’s stadium committee. He is one of the most powerful owners in the league.

“I think the Raiders are looking at this potentially going without Mr. Adelson,” he told reporters in New York.

Adelson, an influential Republican lobbyist who has been on a crusade to ban online poker in the United States, has said he will chip in $650 million of the $1.9 billion needed to build a new football stadium in Las Vegas.

The city agreed to commit $750 million from increased hotel taxes, and the Raiders planned on giving $500 million to the project.

But now there’s a bit of a problem: Adelson could back out of the deal. The casino mogul is attempting to renegotiate with the Raiders, hoping the team will invest more in the stadium, lowering his contribution.

“It’s not an urgent situation,’’ Steve Hill, chairman of the Las Vegas Stadium Authority Board of Directors told the Las Vegas Review-Journal. “I know the Raiders and the Adelson family are continuing to talk. From our standpoint, if they reach an agreement, that’s great. And if they don’t, then the Raiders would have to figure out a different way of moving forward.”

Is the Timing Right?

The Oakland Raiders, once a proud NFL franchise, have been the laughingstock of the league the past decade. Since losing in the Super Bowl to Tampa Bay in 2002, the team hadn’t been to the playoffs until this past season.

But the fans have remained loyal despite a forgetful decade of mediocrity. Now that the team has turned the corner, coming off an impressive 12-4 season, is the timing right to move the franchise elsewhere?

The current stadium lease in Oakland expires in 2018, paving way for a potential move to Las Vegas in 2019. Owner Mark Davis wants a new stadium, wherever it may be.

But last month, Alameda County approved a new stadium deal in an effort to keep the Raiders in the Bay Area. Now it’s up to the team to decide where it ends up.

Sheldon Adelson is the CEO of Las Vegas Sands Corp., the parent company of the Venetian hotel on the Las Vegas Strip. Many poker players have boycotted his hotel due to his anti-online poker stance.

The billionaire didn’t make many friends in the poker community when he pushed the Restoration of America’s Wire Act (RAWA), a bill that would make online poker illegal nationwide.

But he has an opportunity to make some friends in the Las Vegas community if he can help bring the Raiders to town.