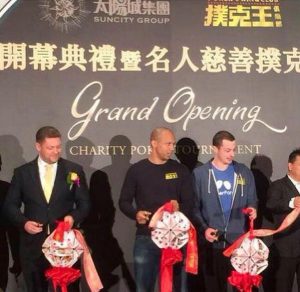 The man regarded as the leading poker player in the world, Phil Ivey, recently lent his famous face to a new poker room inside the Venetian Macau.

Anteing up alongside the likes of Johnny Chan and Stanley Choi, Ivey was on hand to help push the latest poker project by Suncity’s Poker King Brand.

Traditionally known for its focus on VIP lifestyle, Poker King is now changing its strategy in an effort to cater more to the masses.

Still intent on offering a “VIP experience”, Poker King Club’s full time poker room is an attempt to tap into the growing popularity of poker in mainland China.

To help boost the brand and bring the media out in force on the opening night, Ivey was among the poker luminaries invited to take part in a charity tournament.

Also invited to take part in the event but not sitting down until 90-minutes into the action was Tom Dwan.

The American pro has been largely absent from the online scene for the last two years and many pros now say he spends the majority of his time playing in private games in Macau.

Between Dwan and Ivey, the grand opening appeared to go off with a bang; however, the fate of the new poker room may not be as glittering. Dedicated poker rooms have often fared poorly in Macau due to the limited amount of rake casino bosses can take from the games.

However, due to continued drops in gaming revenue, the major operators are now looking for ways to boost their membership base.

April’s financial reports showed a 39 percent year-on-year decline for Macau’s casinos, but Yu believes poker could be a way to reverse the current trend.

“[Poker] has not always been the most profitable game among the casino games. But due to the slowdown in the revenues coming, poker is becoming recognized as a way of bringing in traffic and gaming customers,” said Yu.

The growing interest in poker among Chinese gamblers, combined with Suncity Poker King’s ability to offer VIP experiences, could be enough to help the new poker room thrive.

As well as offering cash games, the new area inside the Venetian Macau will have space for 24 tournament tables and there will be a dedicated schedule every day of the week.

However, for those already inside the poker community, the association with the Venetian Macau, a subsidiary of Sheldon Adelson’s Las Vegas Sands, won’t sit well.

Sheldon Adelson has been a long time opponent of the online poker industry and in recent months the Tournament Directors Association was forced to relocate its annual summit after pressure from the community.

As yet, Ivey doesn’t appear to have received any backlash from the community for his support of the new poker room; however, it’s unlikely many players from Europe or North America will be happy to ante-up and help line the pockets of Mr. Adelson.

Good to know Tom Dwan is still alive. He’s a virtual ghost…haven’t heard anything from him for 2 years. As for Sheldon Adelson, he doesn’t look very healthy, hopefully he’s not long for this world. Satan in waiting patiently to welcome him to hell.

Poker is not going to take off in Macau. The mainland Chinese have to get special permission to go to Macau so you aren’t going to get a huge influx of recreational players(fish) just because Phil Ivey opens a new poker room.