Phil Hellmuth had a rough day on Saturday at the WSOP and it may have been partially self-inflicted. Ben Heath, however, had a phenomenal day, bagging the biggest stack in the $50,000 High Roller with 12 players still standing. Well, technically sitting. 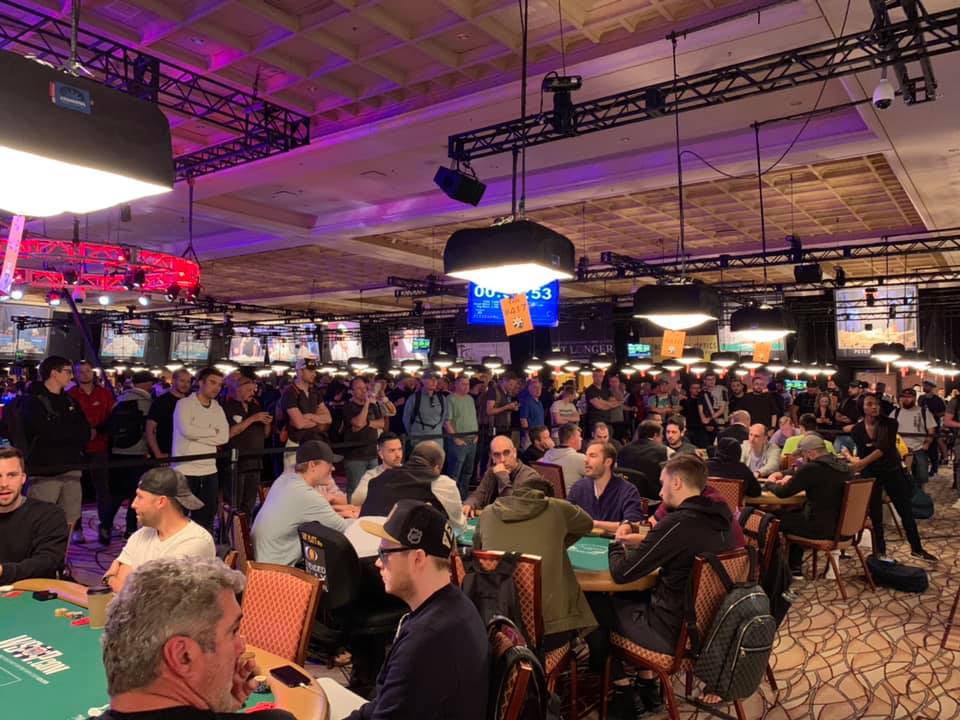 Fans on the rail watch a star-studded cast of characters perform in the WSOP $50k High Roller. (Image: CardsChat News)

The high-stakes tournament is in the money with two days of play remaining. Five players have already picked up their cash.

Hellmuth arrived fashionably late, as per usual, for the $50,000 High Roller. He entered on Day Two during the second level and things didn’t exactly go his way.

The 15-time bracelet winner check-called all three streets with top pair against Chance Kornuth, who rivered a backdoor flush perhaps because Hellmuth played so passively. That was the end of his first bullet. But this is a re-entry tournament so he took another stab at it. Maybe he shouldn’t have.

On just the second hand following his re-buy, Hellmuth busted. But this time his play didn’t come into question. He ran a full house into Ali Imsirovic’s bigger boat. There wasn’t much he could do about it. Sometimes, you play bad and lose, which was arguably the case with Phil’s first buy-in. Other times, you get a set-up hand.

However, the Poker Brat’s terrible horrible no good very bad day was only starting. After busting the High Roller, he hopped into the $500 Big 50 and made another questionable play, dumping his entire 50,000-chip starting stack with pocket treys to an unknown player who hit nothing but bottom pair on a wet board.

And if that wasn’t enough of a beating for the WSOP G.O.A.T., he re-bought and quickly busted when his flopped set of aces got cracked by an unknown player’s king-high flush on the turn. Four buy-ins, four times felted. One day. He claimed on Twitter that was his all-time record. Good game, Phil.

Ali Imsirovic began Day One on Friday with a bang, running players over left and right. The young high-stakes phenom took no time building a massive stack and ended the session with the chip lead.

But on Saturday, other than that big pot he won against Hellmuth, his stack trended downward much of the day. And before the bubble had burst, he was out.

Elio Fox, who had great success in these high rollers last year at the WSOP, having chopped the $100k and finishing in 9th in the $50k, has the third largest stack out of 12.

Is playing top pair passively playing the hand poorly every time or just sometimes? Did he play many pots with the guy that bust him?